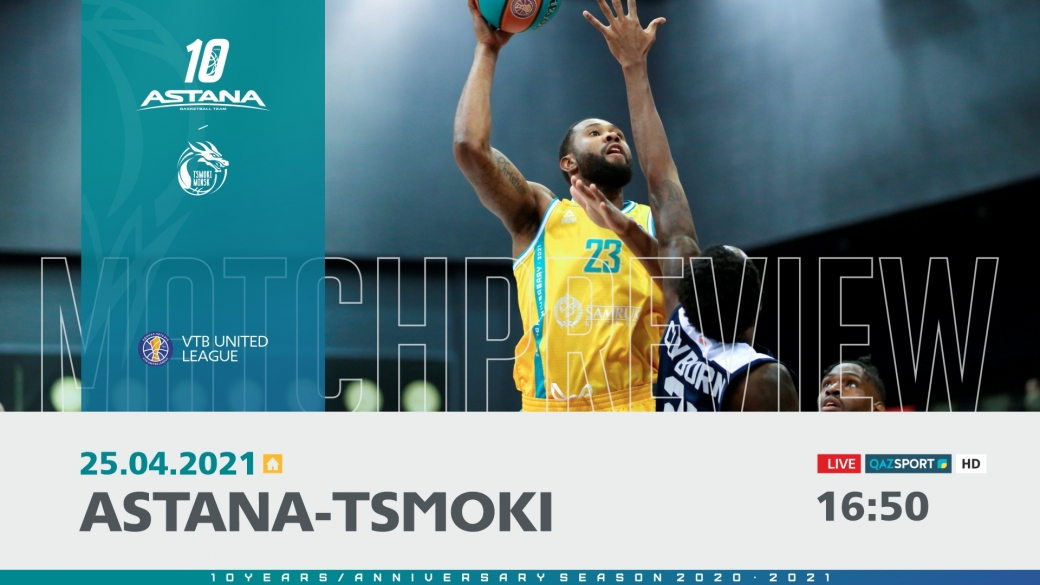 At the VTB United League regular championship, the basketball club «Astana» will hold a home match with the Belarusian team «Tsmoki Minsk». The upcoming match will be the final for the capital team this season of the League. The game will take place on Sunday 25 April, beginning at 17:00 Nur-Sultan time.

«Tsmoki-Minsk» is a Belarusian professional men's basketball club from the city of Minsk, founded in 2006. This season, in addition to playing in the VTB United League and the Belarusian Championship, he participates in the European Cup.

Achievements:
The upcoming match with the Belarusian “dragons” will be the last for our team in the VTB United League this season, and it will be held on the final game day of the tournament's regular season. In the first game of the season against «Tsmoki», which took place just over a month ago in Minsk, our guys won a strong-willed victory with a difference of 2 points with a score of 78:80. After that match, the Minskers played five games and all were unsuccessful. First, they lost to «Khimki» and «PARMA» on the road, and then at home, they suffered three defeats in a row in games with «Loko», «Yenisey» and again with «Khimki».

“Tsmoki Minsk” currently occupies the last thirteenth line in the standings, having won only two times in 23 meetings this season. For them, the result of the upcoming game has no effect on their final position and, in any case, they will remain in the last position. “Astana” is ahead of its rivals by 4 wins, having won 6 games in 23 meetings. But thanks to this result, they are only on the 12th line, ahead of the Belarusians by one point in the table. The outcome of this game is important for our team, which can rise one line higher, becoming the eleventh in the end. However, the victory in this meeting gives only a chance, and the final arrangement will depend on the result of the parallel game between “Yenisei” and “Kalev”. That is, if “Astana” beat “Tsmokov”, and “Kalev” wins in Krasnoyarsk, then our team will become 11th, and with any other outcome of these games, “Astana” will end the season in 12th place.

Since the last face-to-face game, which took place a little over a month ago, the roster of our rivals has not changed, so it is well known to both the players and the coaching staff of «Astana».

The most effective and efficient player on the team at the moment is Chris Cliburn. Also among the leaders of the team are Derek Cook and Toms Leimanis. Among the Belarusian players, Pavel Benjamin Dudu, Andrei Rogozenko and Vladimir Veremeenko, who constantly participate in the game, as well as Alexander Pustogvar, although he does not spend much time in the game. But Evgeny Belyankov last time was in the application just in the home match against “Astana”, and Aleksey Trostinetskiy did not participate in the games for almost two months.

The match will take place on Sunday 25th in Nur-Sultan at the arena of the Republican Cycling Track «Saryarka», beginning at 17:00 Nur-Sultan time. The online broadcast of the match will be available on our website in the Match Center section, as well as live on the QazSport TV channel.