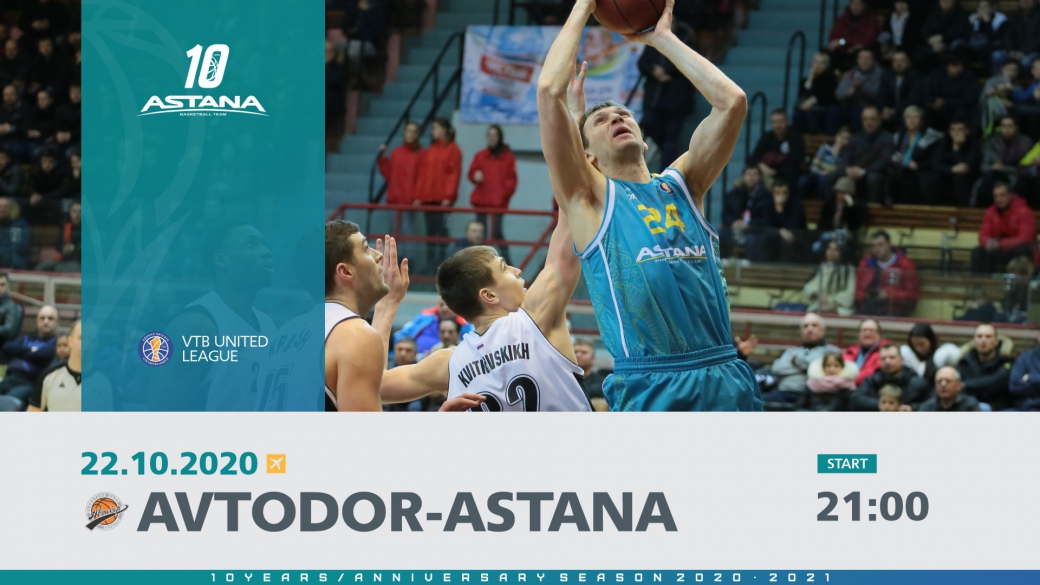 The tour of «Astana» continues! Next stop — Saratov

Inspired by the historic victory over Khimki, the players of the Astana basketball club went to Saratov, where tomorrow they will meet with the local Avtodor as part of the VTB United League. The match will take place on Thursday, October 22, starting at 21:00 Astana time.

Avtodor is a Russian professional men's basketball club from the city of Saratov, founded in 1960.

Avtodor's roster has changed significantly since last season, with only 6 people remaining in the Saratov team. Among the main losses of the team of Americans Isaiah Hicks and Orlando Johnson, as well as the Frenchman Mpuhammadou Jaiteh. In addition, American Ryan Boatwright and Senegalese Muhammad Fay, who did not play many games last season, did not renew their contracts with the team. Also, the Russian player Alexei Babushkin had left the team, who was one of the key players the last season.
But one of the leaders of the last season's team, American Markel Starks, retained his residence in Saratov. There are also young Russian players who have played a lot last season: Alexander Petenev, Nikita Mikhailovsky and Anton Kvitkovskikh, as well as Yegor Bestuzhev and Nikolay Mukha.

As for the newcomers to the team, it is worth distinguishing the American centre Drew Gordan, who is quite famous in the VTB United League. He moved to Saratov from the Polish Zielona Gora, and he previously played in Zenit. In addition, he played in the Serbian Partizan, the Italian Dynamo Sassari, the Turkish Banvit, the French Champagne Chalon-Reims and the Lithuanian Lietuvos Rytas. Then he played for the Delaware EitiSeventers and Long Island Nets in the NBA Development League, and in the NBA Summer Leagues, he participated in the Dallas Mavericks, Utah Jazz, Sacramento Kings and Philadelphia SeventiSixers. Croatian striker Zeljko Sakic also played in the VTB United League before. The Croat has a pretty impressive career behind him, he started in the Croatian teams Kaptol and Dubrava, and then went to neighbouring Bosnia and Herzegovina, where he took part in the Zrinzhski Mostar and Shiroki, with which he once became the champion of the local championship. Then there was the Montenegrin team Sutor Montegranaro, the Spanish Manresa and the victory in the Bulgarian championship with the team Lukoil Akademik. Then there was a return to their homeland, to the Croatian Cibona and a season in the Romanian team U BT Klui-Napoca. He played in the VTB United League as the part of the Polish team Stelmet Zielona Gora, and last season he spent in the Lithuanian team Panevėžio Lietkabelis. Also, two young Americans appeared in the Saratov team: forward Ben Emelogu, previously played in the NCAA Student League, and began his professional career last season in the Polish Gdynia; also, after the time in the student league, he spent only one season in the professional arena, playing in the NBA development league in the Texas Leagues and Israel's Hapoel Eilat. The team also acquired three newcomers with a Russian passport. Center Alan Makiev is not entirely new to the VTB league or Avtodor; he previously spent five seasons at the Saratov club, and also played for Rodniki, Irkut, Ryazan, as well as CSKA. For the past two seasons, he has been with Uralmash. For forward Evgeny Minchenko, this is his debut in the VTB United League. Previously, he played in the Ukrainian teams Kiev and Odessa, the Latvian Liepaja and Saldus, and spent the last five seasons in the Russian Super League in the teams Samara, Ryazan and Kupol-Rodniki. And the youngest player in the team was the Russian forward Vitalijus Pranauskas. Avtodor played only two matches in the VTB United League and lost both, and still, it is possible to determine the leaders of the team. During these two matches, American Nate Mason, who spends the most time on the court, and is the most productive and efficient player on the team, became the clear leader. In addition to him, Zeljko Shakic, Nikita Mikhailovsky, Markel Starks and Alan Makeev, who show good results, spend more than twenty minutes per game on the court. Ben Emelogu, Alexander Petenev and Drew Gordon also have quite a lot of playing time. In addition, Evgeny Minchenko and Yegor Bestuzhev entered the court.

It is extremely important for Avtodor to win this match because before that they played two matches and lost both. At the moment, they are at the bottom of the standings, along with three other teams that have not yet learned the taste of victories this season. Astana, literally the other day, escaped from this fate, snatching victory in the match with Khimki, but the defeat in Saratov will not bring anything good to our team, and besides, our team is going to visit for a victory to strengthen its position in standings.

Astana and Avtodor have met 14 times. But in the VTB United League, they met 11 times, of which 6 times the Kazakh team took the upper hand. Last season, because of the coronavirus, they played only once, and then at home, the Saratov team turned out to be stronger, winning five points. But this season the Kazakh team is going for revenge.

Interesting Facts:
The match will take place on Thursday, October 22 in Saratov at the arena of the Kristal Sports Palace, starting at 21:00, Astana time.

The online broadcast of the match will be available on our website in the Match Center section, and you can also watch the match in replay on the QazSport TV channel the next day, October 23 at 08:00.