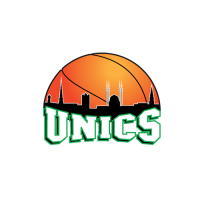 Before the start of the first game of qualification window for the World Cup 2023, the basketball club «Astana» will have time to visit the leaders of the VTB United League — Kazan UNICS. The match will take place in Kazan on Sunday 14 November, beginning at 21:00 Nur-Sultan time.

UNICS is a Russian professional men's basketball club from Kazan, founded in 1991. In addition to the VTB United League, this season participates in the Euroleague. 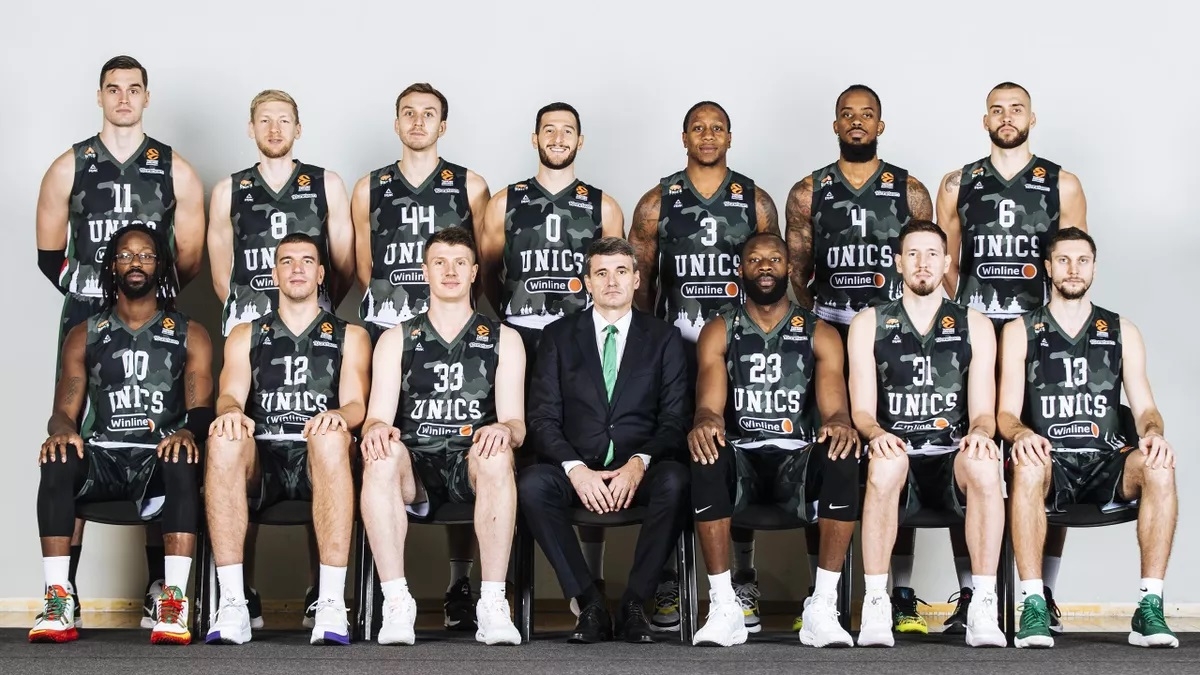 Three American players will make their VTB United League debuts this season with UNICS. Seasoned guard O.J. Mayo spent his first 8 seasons in the NBA with the «Memphis Grizzlies», «Dallas Mavericks» and «Milwaukee Bucks». Then there were the Puerto Rican «Athleticos de San Herman», and the last three seasons he has spent in Asia — in the Taiwanese «Daqing Tigers» and Taipei «Fubon Braves», as well as the Chinese «Hunan Jinjian Mie» and «Liaoning Flying Leopards». The American defender Lorenzo Brown in the United States participated both in the NBA and the NBA Development League teams. In the NBA, he played for the Philadelphia «SeventiSixers», Minnesota «Timberwolves», «Phoenix Suns» and «Toronto Raptors». In the Development League, he played for the «Delaware Eightysevens», «Springfield Armor,» «Grand Rapids Drive» and «Raptors 905». In addition, Lorenzo played in China in «Zhezhian Golden Bulls» and «Gunzhou Long Lines», and also managed to play for Serbian «Crvena Zvezda» and Turkish «Fenerbahce». American forward Jarrell Brantley before UNICS spent two seasons in the «Utah Jazz» team in the NBA, as well as in their farm team, the Salt Lake City Stars in the NBA Development League. Croatian shooter Mario Hezonja began his professional career in the Spanish “Barcelona” system, spent five seasons in the NBA with  »Orlando Magic», «New York Knicks» and «Portland Trail Blazers», also played in the Greek «Panathiacos» and the Croatian national teams. Italian guard Marco Spissu played only in Italy in the teams «Torres», «Dynamo Sassari», «Sant'Orsola», «CUS Bari», «Casalpusterlengo», «Viola Reggio Calabria», «Dertola» and «Virtus Bologna» and won the EuroCup in 2019. Nigerian center Tony Jekiri started in the Turkish team “Bandirma Kyrmyzy” and became the champion of Belgium and the winner of the Belgian Cup with the local “Oostende”. Also in his career he was the part of Turkish «Gaziantep», the French «ASWELL» and the Spanish «Basque Country». Four experienced Russian players have joined the Kazan team this season — forward Andrei Vorontsevich has moved from “NN”, and before that he spent more than ten seasons at CSKA. Guard Artem Komolov also moved from Nizhny Novgorod, where he spent the last four seasons, and previously played for «Zenit». Guard Vyacheslav Zaitsev played in «Khimki» last seasons, and before that he played for «Krasny Oktyabr» and «Yenisei». Forward Evgeny Valiev is another ex-Khimki player who played for «Parma», «Zenit» and «Triumph».

Head coach: UNICS changed almost the entire coaching staff in the offseason. The head coach of the Greek Dimitris Priftis and his assistants, too, the Greeks Thomas Niku and Valiles Simtsak, have left. Croatian specialist Velimir Perasovic became the new head coach. Velimir started his career as a player and became the silver medalist of the Olympics, World Champion, European Champion and twice European bronze medalist. He played in the Yugoslav team “POP 84”, and the Spanish “Breogan”, “Taugres”, “Fuenlabrada” and “Alicante”. He began his coaching career in his native team “POP 84”, which by that time was called “Split”. There were six Spanish teams: «Sevilla», «Taugres», «Estudiantes», «Valencia», «Laboral Kutchina» and «Basque Country». Also in his career were the Turkish teams “Efes Pilsen” and “Anadolu Efes”, the Croatian “Cibona” and the Croatian national team. He is helped by Slovenian Jure Drakslar, Greek Konstantinos Kaimakoglou, who last season played himself  for UNICS, Serb Djordje Varagic, Croatian Milan Karakas and Russian Artur Bigeyev, the only coach who remained from last season.

Standing position: “Astana” currently occupies the seventh line in the VTB United League with two victories and two defeats. UNICS is # 1 with five wins in six games. At the start of the season, they outplayed «Lokomotiv-Kuban» and «Zielona Gora». then they fought back in the match with “Yenisei”, lost to “Avtodor” and not without difficulty won against “PARMA”. Well, in the last match they snatched victory from CSKA. In the Euroleague, the Kazan team won three out of nine matches, while literally on November 12, they defeated the Greek “Panathinaikos”.

History of games: For the entire time of the confrontation in the VTB United League, «Astana» and UNICS have met 17 times, while the capital's team managed to beat eminent rivals from Kazan only twice.

Interesting Facts:
The match will take place on Sunday 14 November in Kazan at the Basket-Hall court, starting at 21:00 Nur-Sultan time. Online broadcast of the match will be available on the main page of our website.

The away game of the basketball club «Astana» with the king of the mountain of the VTB United League standings — Kazan UNICS became a serious test for our guys. The game turned out to be very ineffective, and our team was very much let down by the long distance field goal percentage.

UNICS won the jumping ball and in the very first attack the hosts opened the score. Our team didn't have to wait long — Jaylen Barford earned the first points in the match. The home team were much more successful at the start of the game. Two minutes after the start of the game, the Kazan team won five points. Anthony Hickey implemented three attacks towards the middle of the quarter, and Skylar Spencer also scored with points. But UNICS did not pose at that time, but actively used their strengths and, as a result, won 9 points after five minutes, after which the Kazan team reached a double-digit advantage a minute later. Mark Tikhonenko scored the first long-range shot for our team and Barford scored twice from the free-throw line until the end of the first quarter, but UNICS won the first ten minutes by a double-digit margin — 26:15. Tikhonenko at the start of the second quarter was immediately accurate from beyond the arc. In the first five minutes of the period, both teams were not very productive, except for Mark Tikhonenko, Hickey and Campbell earned two points during these five minutes, and the hosts were able to score only five points. The difference in the score was 9 points, and Antonio Campbell further reduced it to six with his three-pointer. After two points from Spencer, the backlog of “Astana” was reduced to four points. In the last minutes of the first half of the match, UNICS scored five more points, and Barford and Campbell also updated their scores for the Kazakh team. “Astana” won the second quarter, mainly due to the game in defense, allowing the rivals to score only 10 points, but nevertheless lost after twenty minutes of the game with a score of 36:31. A poor first quarter and a good second one, only five points behind, in general, promised a continuation of the struggle in the second half. But, unfortunately, UNICS was able to outplay our team at the start of the third period. In more than three minutes, Barford scored two points for our team and Spencer was accurate from the free throw line. As for the rivals, during this time their advantage has broken through the line of ten points. Jaylen Barford hit the basket twice until the middle of the third period, and Maxim Marchuk, being alone under the rivals' basket, hammered the ball from above and reduced the gap to six points. However, the Kazan team regained their double-digit advantage very quickly. Antonio Campbell was the last to score this quarter by converting an end-one. Before the final ten minutes “Astana” was losing with the score 51:43. Such a difference could well be won back in ten minutes, but for this it was necessary to increase the hit rate from beyond the arc, which was simply disastrous in the first three quarters. In the first minutes of the final period, the teams exchanged a couple of effective attacks, in which Barford and Hickey scored more points, and thus the difference of eight points remained. The three-pointer rate for the Kazakh team did not improve at all, and the players continued to miss from behind the arc, plus problems with shots from an average distance and a significant amount of losses were on top of this. UNICS at this time was extremely active and won 20 points five minutes before the end, and there were no special questions about the winner in this game. Jaylen Barford scored two free throws, Anthony Hickey scored after drive, and Rustam Murzagaliev finally scored a three-pointer. The situation on the court was getting worse, and the difference was reduced to thirteen points, but only two minutes remained to play. Time was playing on the opponents' side, and they also earned points in the offense. UNICS secured a victory in advance — Campbell earned two more points, and Murzagaliev finished the match with an exact three-ponter, but this did not affect the result of the game. 71:59 — UNICS wins.

Most productive:
Next match: Astana's players will now wear the VTB United League club uniform only three weeks later on December 5, when Estonian «Kalev» will arrive in Nur-Sultan, and before that our guys as part of the National Team will play the first two qualifying matches for the World Cup. 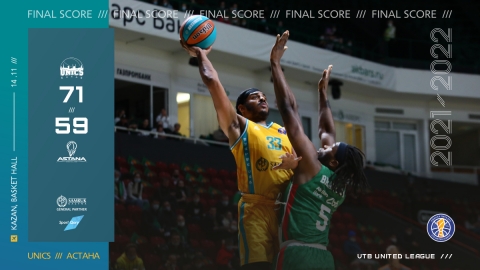 Club news
36
Long-distance performance let «Astana» down in Kazan
The away game of the basketball club «Astana» with the king of the mountain of the VTB United League standings — Kazan UNICS became a serious test for our guys.
Press service 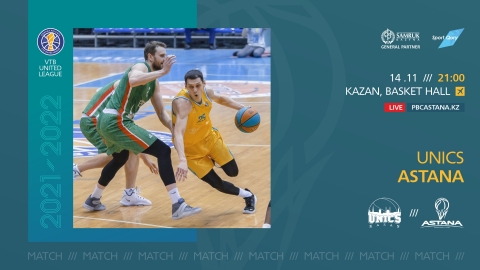 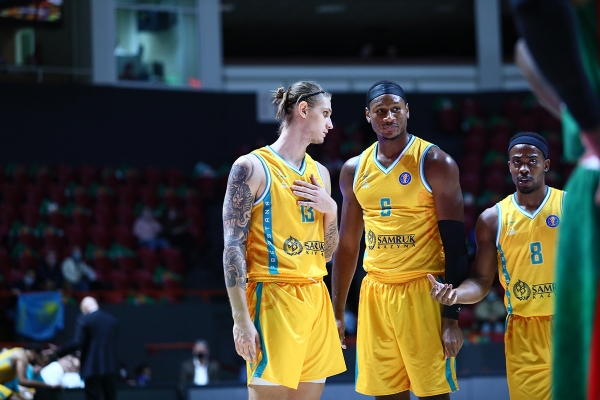 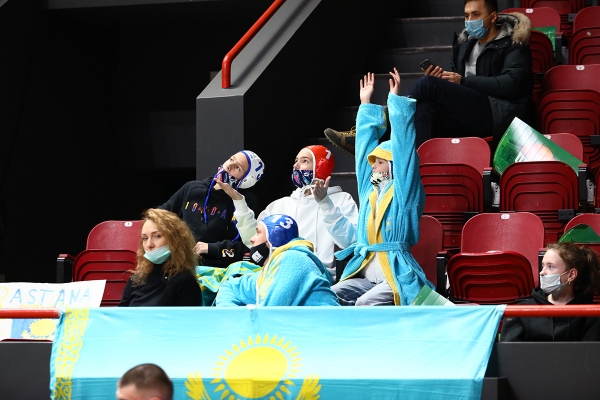 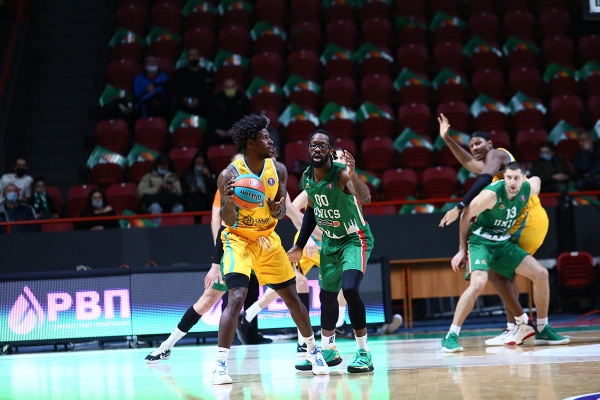 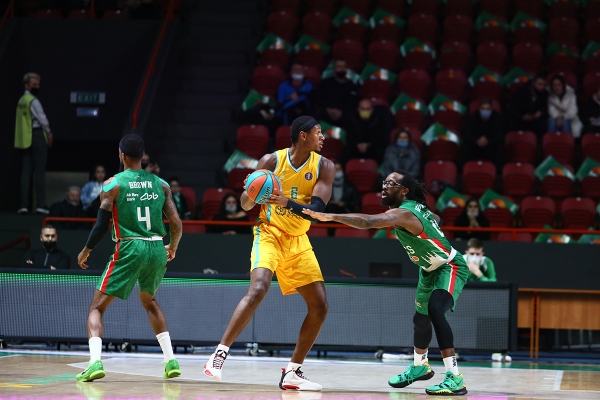 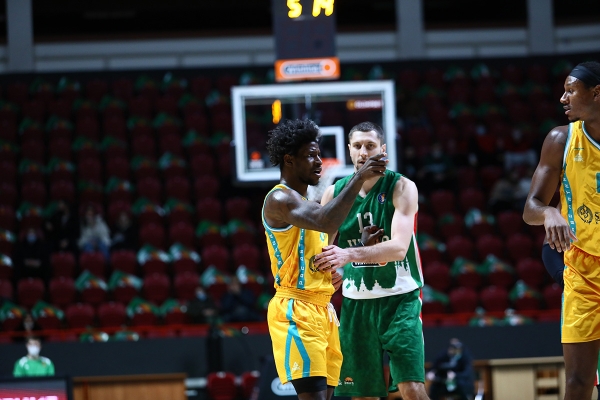 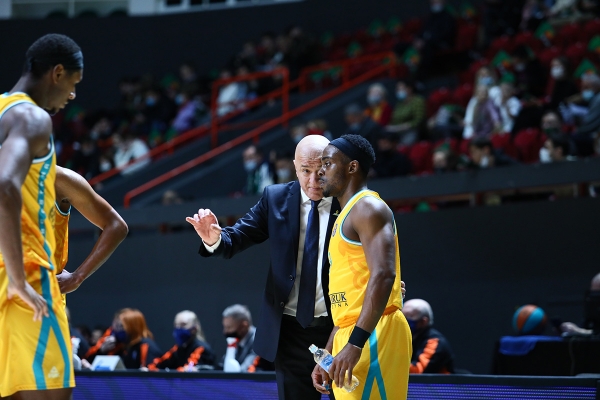 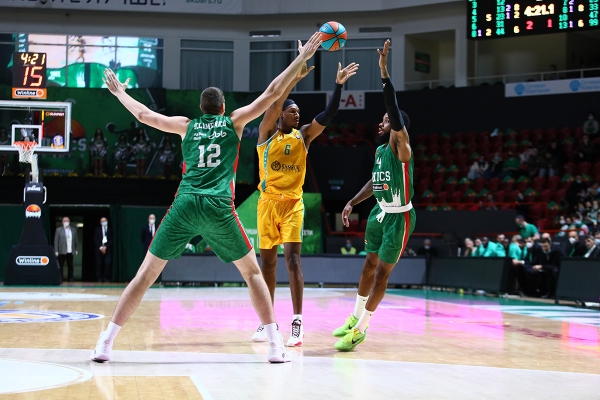 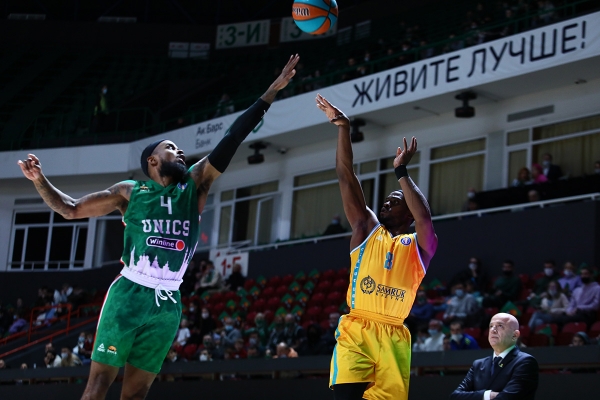 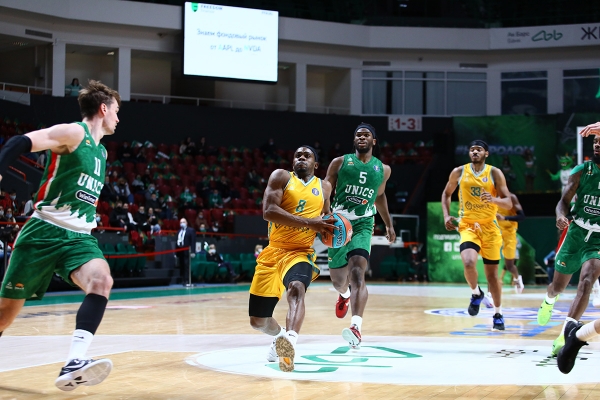 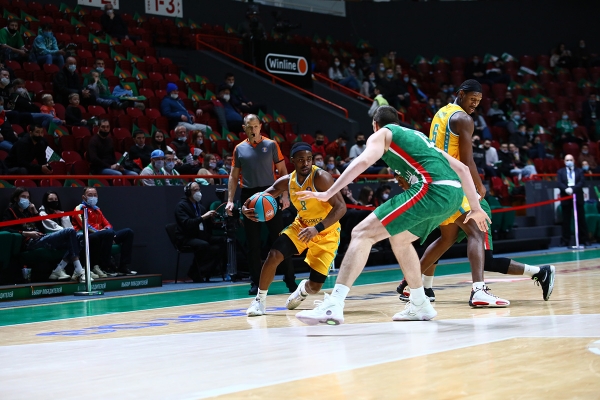 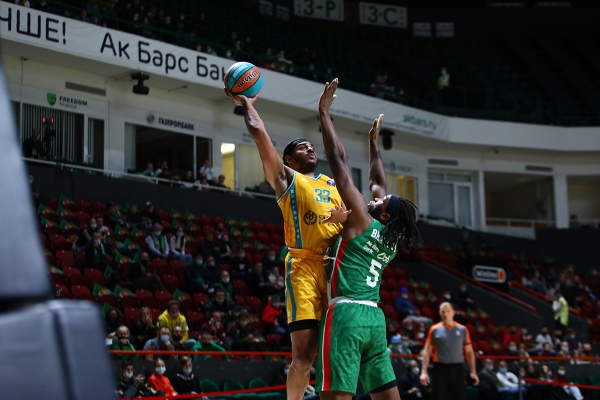 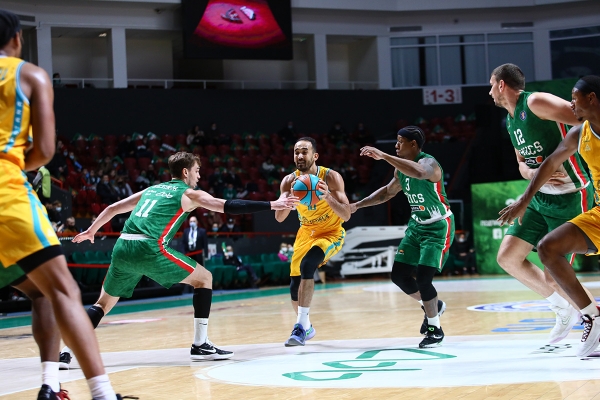 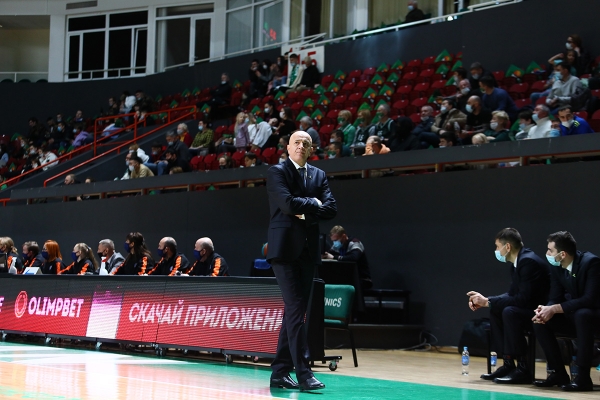 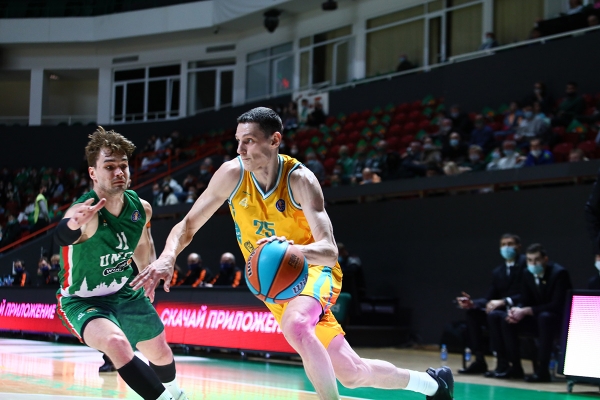 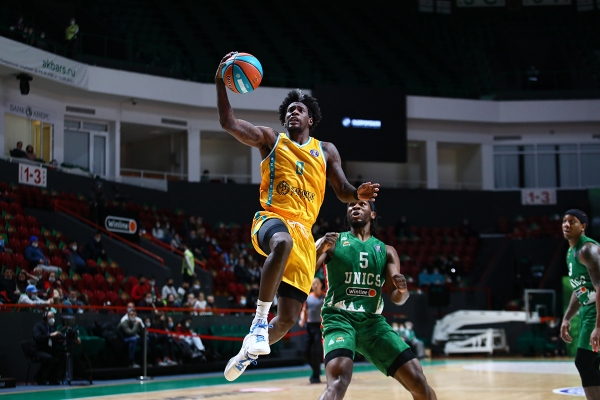 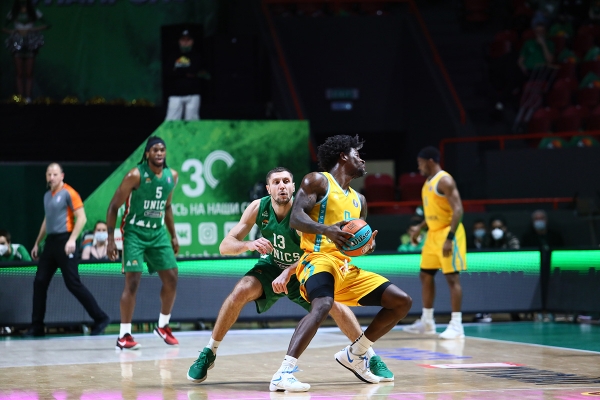 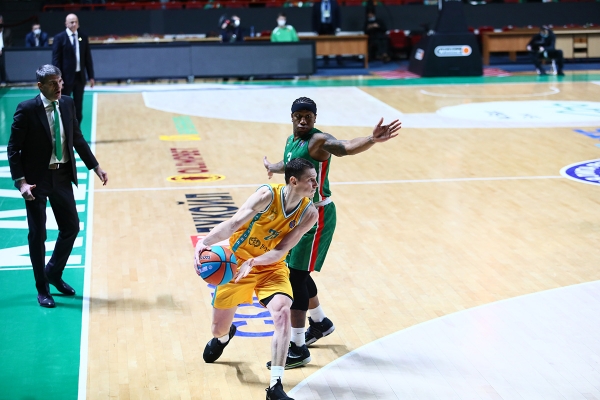 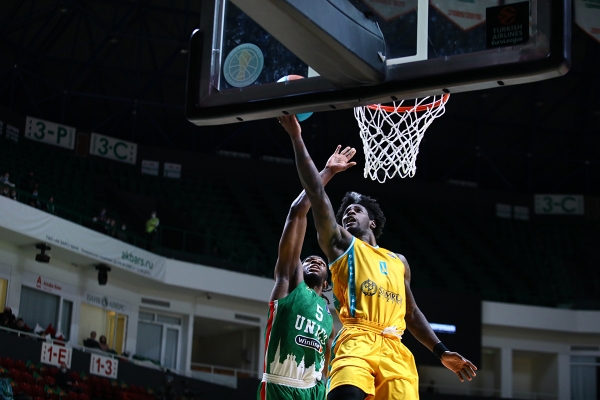 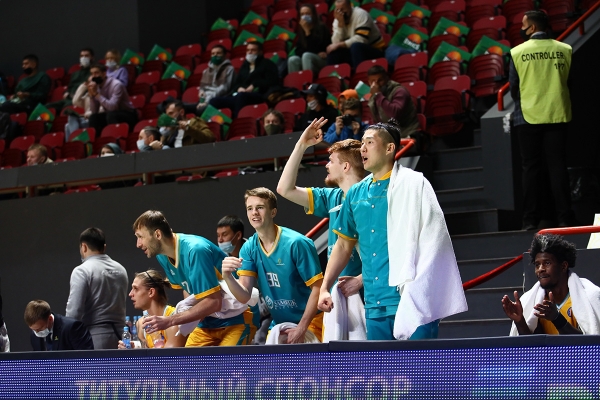 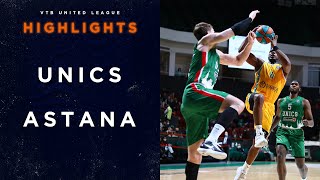 UNICS - is a Russian professional men's basketball club from the city of Kazan, founded in 1991.