ATTENTION! By popular request, the Presidential Basketball Club «Astana» extends the period for the sale of seasonal passes until October 31. You can pre-order and purchase the subscriptions on the website and in the showroom of the club’s partner «Easy Bounce» basketball store. All details on the link.

The Presidential Basketball Club “Astana” will hold the first series of home matches in the season of the National League against Kokshetau “Sinegorye”.

“Sinegorye” - is a Kazakhstan professional basketball club from the city of Kokshetau, founded in 2017.

This season, the Kokshetau team is headed by Oleg Kiselev, who in the past seasons was a head coach of «Almaty Legion», and as well as of «Barsy Atyrau» and «Caspiy». It is worth noting that last season, “Sinegorye” was headed by Andrei Mekhovyh, who spent several seasons in the coaching staff of the capital team. In the offseason, the ex-player of “Astana” Denis Degtyarev left the Kokshetau team, as well as all the “big” ones — Alexander Danilchenko, Mikhail Evstigneev, and Russian Sergey Dubinin. «Sinengorye» retained their Kokshetau backbone, as well as point guard Azim Yagodkin. The experienced centers, Ukrainian Stanislav Zavadsky and Dmitry Sviridov from the “Legion”, became the new members of the team. Also, defender Vadim Korzhov, shooting guards Roman Marchuk and Russian Roman Lagutin joined “Sinegorye”. Also, Vasily Petrishinets from “Tobol” joined the team.

The history of the games: “Sinegorye” debuted in the National League last season, and it was then that “Astana” and the Kokshetau team first met on the court. Over the past season, the teams played 6 times in the National League and 1 time in the Cup of Kazakhstan. In all seven matches, the metropolitan team won a landslide victory, leaving no particular chance to their rivals.

Tournament standings: “Astana”, after the first two games with “Caspiy”, is leading the league table of the National League, and “Sinegorye” is the last team that has not yet played a single match and just starts this season with games in Nur-Sultan.

For “Astana” it will be the first home matches of the National League, and although “Sinegorye” have not yet shown their game this season, in the upcoming matches in Nur-Sultan, “Astana” will be an absolute favorite.

Matches will take place on Thursday and Friday on October 24 and 25 in Nur-Sultan in Saryarka Cycle Track arena. Beginning of matches at 19:30 Nur-Sultan time. Free admission.

The Presidential Basketball Club “Astana” held the first home game of the National League, which resulted in a victory over the guests from Kokshetau, “Sinegorye”.

The match began on equal terms and, although “Astana” was the favorite in the match, Emil Rajkovic’s wards could not immediately demonstrate their status. Our opponent had a good mood for the game, and they did not want to miss the opportunity to impose their pace at the start of the game. “Sinegorye” failed to lead the game, but were able to stop the capital players. As a result, “Astana” after 10 minutes won 6 points. In the second quarter, the guests from Kokshetau began quickly reducing the gap and even pulled away, but they failed to preserve their lead. “Astana” again shot ahead, but not by a large margin. “Sinegorye” again managed to come forward, but our basketball players still left for a big break as the leaders — 36:34.

Such a way of things clearly did not suit Emil Rajkovic, nor anyone else in the coaching staff of “Astana”, and during the break, adjustments were made to the team’s game. In the third quarter, our team looked better than their opponents and gradually increased their lead. Our guests tried to keep “Astana” and showed quite a good game, but they failed to block our players and before the fourth quarter the difference was already 10 points. The intrigue in the match was still alive, but “Astana” broke the resistance of the rivals and after 5 minutes of the final period quarter, the capital team's advantage had doubled. Our basketball players confidently completed the match, having won a major victory — 81:55 (19:13, 17:21, 19:11, 26:10).

“Sinegorye” started the season with a defeat from our team, but resisted well for three quarters. “Astana” has gained a landslide victory and continues to lead the National League standings with a 100% result.

Most effective: Jeremiah Hill scored the most points for “Astana” — 15, also on his account 6 rebounds and 3 assists. Dusan Ristic had 13 points, 4 rebounds, and 3 assists, and Maxim Marchuk scored 10 points, 4 rebounds, and 4 steals. In “Sinegorye” the most effective player was center Stanislav Zavadsky — 10 points, 7 rebounds and 2 block shots, but the highest number of points for the game was in the asset of Roman Lagutin — 17.

Next match: tomorrow, October 25, in the city of Nur-Sultan, a second game will be held between «Astana» and «Sinegorye». 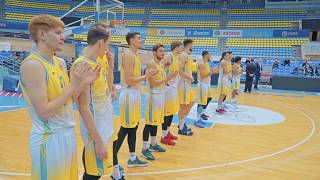