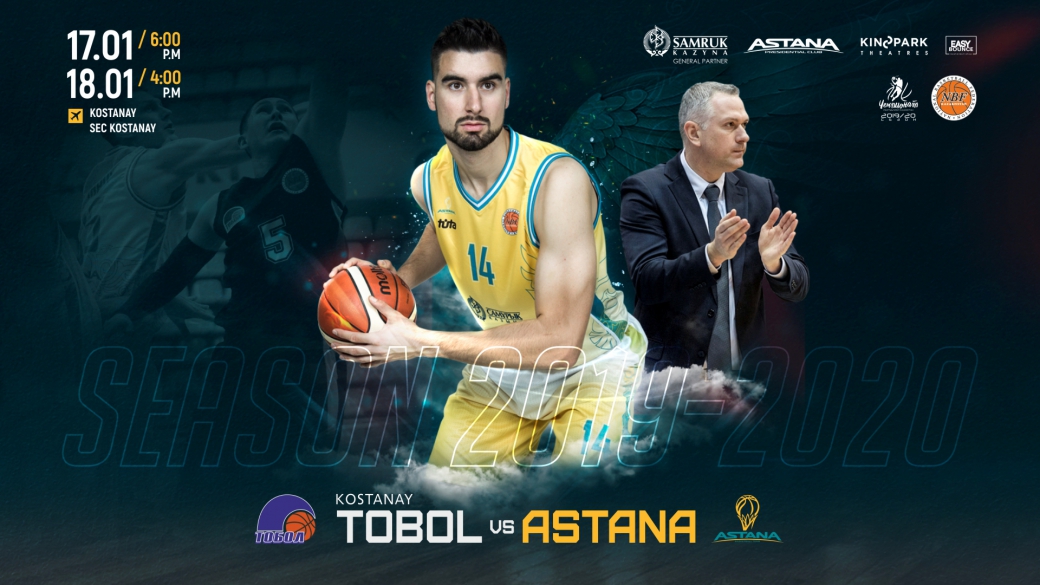 «Astana» goes to Kostanay to play with local «Tobol»

The presidential basketball club «Astana» will go to Kostanay, where on January 17 and 18 they will play with the local «Tobol» in the framework of the regular National League Championship.

“Tobol” - is a Kazakhstani professional men's basketball club from the city of Kostanay. The upcoming games will be the third and fourth matches between “Astana” and “Tobol”. The first two games were held in Nur-Sultan a little over a month ago — on December 9 and 10 of last year. Then, “Astana” won two more than confident victories over rivals, beating them in the first match with an advantage of +21 (98:77), and in the second +29 (101: 72). After those games, the Kostanay team played four more games with other teams: an away series in Aktobe and home matches with “Barsy Atyrau”. If the Kostanay team had no problems with “Aktobe” when they snatched a victory in the first match and confidently outplayed the rivals in the second, then at home “Tobol” lost to the Atyrau team a lot in the first match, but took confident revenge in the second game. For “Tobol” the upcoming games will be the final in the regular season. Since the beginning of the season, the Kostanay team has won «Kaspiy» and «Aktobe» four times, two victories and two defeats in each of their games against Sinegorye and «Barsy Atyrau», as well as two defeats against «Astana».

Standings: “Tobol” is currently on the third line of the standings — 12 wins and 6 losses (30 points). Kostanay team has a theoretical chance to rise higher, but for this, they need to outplay our team in both games by a very large margin, and also hope that «Astana» will lose all the remaining matches in the regular season. As for «Astana», our guys have been confidently going without defeats since the beginning of the season, having won all 14 matches held and occupying the first line of the teams' rating. The players of Emil Rajkovic have already secured first place in the regular season by 99.9%, and they just need to win one — any of the remaining six games to neutralize all the theoretical chances of their rivals for the first place in the regular season.

Leaders of rivals: center Anton Bykov is the undisputed leader of the team, gaining an average double-double for the match — 18.5 points and 10.4 rebounds, in addition, he is the most effective player in the entire League. Center Anton Ponomarev is slowly gaining his shape and is close to a double-double for the match, and he is the leader of the team in block shots as well. The main point guard of the team, Shaim Kuanov, has the highest average team passes and steals, and he scores over 10 points in a match. It is also worth noting a guard Konstantin Dvirnoy, as well as forwards Maxim Voeikov and Pavel Ilyin. These experienced players bring a lot of useful actions for the team and have a lot of playing time on their account.

Changes in the roster: from the previous two-game series held in Nur-Sultan at the start of December, the roster of our rivals have not changed at all.

Matches will be held on Friday and Saturday — January 17 and 18 in Kostanay in the arena of the Kostanay Sports Complex. The match starts on Friday at 18:00, and the game on Saturday starts at 16:00 Nur-Sultan time. Online broadcasts of matches will be available on the main page of our website.