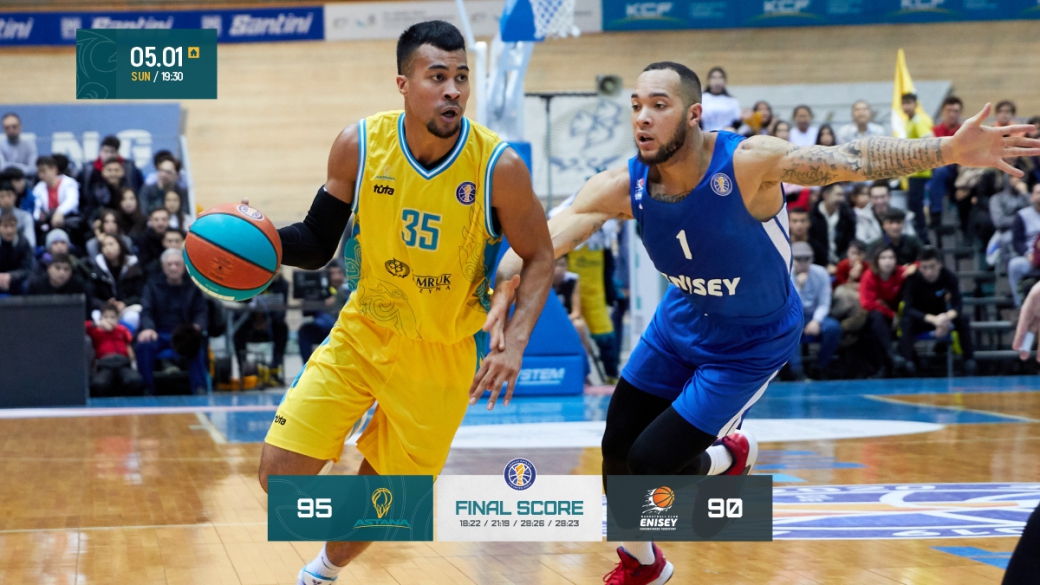 “Astana” snatched out the victory in the home game with “Enisey”

«Astana» Presidential Basketball Club has begun the new year with a victory in the VTB United League home game against «Enisey» Krasnoyarsk.

The victory in this match, as in any other, was important for both teams, but if in the case of the success of the Krasnoyarsk team it would only strengthen their position on the fourth line of the tournament table, then for “Astana” the victory meant returning to the playoff zone. In addition, the interest in the game was immediately sparked by two newcomers of «Astana» — James Florence, for whom this game became a debut on a home court, as well as the return of Stephen Holt. In the starting five of  “Astana”, there was James Florence, Dushan Ristic, Malcolm Hill, Alexander Zhigulin and Vadim Shcherbak.

The toss was left to our guys, who in their first attack, through the efforts of Dusan Ristic, opened the score in the match. However, the starting spurt was not followed by any of the teams, and the fight was intense, sometimes chaotic, but in general not productive. The game gradually took on an increasingly open character, but the positional struggle did not stop, and both squads focused on their “big” ones in the attack. As for the long-range shots, which the Kazakh team is famous for especially in home matches, in the first quarter, it missed the mark. Of the 6 throws from behind the arc, only one was accurate, which was performed by Jeremiah Hill. If you look at the score, it was our guests who were more often ahead in the course of the first quarter, although «Astana» had come forward more than once. And yet, in the first quarter, “Enisey” had a slight advantage of 4 points. In the first minutes of the second quarter, the Kazakh team stalled a bit, gaining only 2 points in three minutes, while the guests widened the gap to 10 points. But Krasnoyarsk failed to overcome this milestone, the Astana players were able to stop their rivals in time, but could not find their game to seize the initiative completely. The difference within 8 points in favor of  “Enisey” was preserved almost the entire quarter. The turning point happened when Alexander Zhigulin failed to complete the attack with a dunk, as the rival leader Davion Berry made an unsportsmanlike foul on him. It was from this point that our team gained even more confidence, and “Astana” for the first time in the quarter equalized the score 35 seconds before leaving for a long break. But the yellow-turquoise did not come forward, and “Enisey” had ended the first half in their favor with a minimum advantage of 2 points — 39:41. In the second half of the meeting, the teams began very actively, and started playing very open and, most importantly, productive basketball on the site. After only two and a half minutes from the beginning of the third quarter, the teams scored 24 points for two, and the score was once again equal. Efficiency until the end of the third quarter was very high, and rivals pleased the spectators with open basketball. An equal and dynamic struggle took place on the court during which none of the teams managed to take the lead. The playing time of the third quarter ended with an equal score on the scoreboard — 67:67, and in front of everyone, the tense final 10 minutes of the match were ahead. The teams fought for every point and for every centimeter of the floor, and the base players quickly entered the court, thanks to which the flame of the game on the court flared up again. There were still no obvious leaders in the game, although «Enisey» made a small breakthrough in the fourth minute and forced Emil Rajkovic to immediately cut it short with a timeout. After a tactical pause, everything went smoothly for our team, but not for long, because as soon as «Astana» evened, the coaching staff of the Krasnoyarsk team stopped the game with a timeout. Our guys were ahead for the next minutes, although «Enisey» was no more than 3 points behind, adding fuel to the furnace of intrigue. Alexander Zhigulin, realizing 2 free throws, made a steal and sent Malcolm Hill into the fast lead, which in turn increased our advantage to five points. Drazen Anzulovic was again forced to take a timeout when the end of the game was less than a minute and a half. Naturally, this time passed in a tactical struggle. «Enisey» had every chance to snatch a victory, or at least put the game into overtime, but our guys confidently defended their claim to victory, and Malcolm Hill killed the intrigue with two exact free throws in the last seconds. As a result, “Astana” made the first gift to its fans in the new year, having defeated the Krasnoyarsk “Enisey” — 95:90 (18:22, 21:19, 28:26, 28:23).

Most productive:
The hero of the match is Malcolm Hill, who became the brightest player of attack in this game. At the same time, the forward updated his personal record in terms of performance — 29 points, efficiency — 31 and steals- 3.

Head coach of «Astana» — Emil Rajkovic:
- This is a very important victory for us because we played against a strong team that occupied fourth place in the standings. Drazen Anzulovic and his wards have a great season, but our players today showed an excellent mood and gave it all having gained an important victory.»

Head coach of «Enisey» — Drazen Anzulovic:
- Congratulations to the opponent, in defining moments they were better and smarter. We had the opportunity to decide the outcome of the game in our favor, but we did not use it. At the end of the game, «Astana» was calm and achieved this victory.

Consequences: “Astana” once again proves that it rarely loses at home, and this victory moves the team two lines up in the standings, settling them seventh, while “Enisey” went down a line below, becoming fifth.

Next match: exactly one week later, on Sunday, January 12, our guys will have an away game in the VTB United League against the Russian «Parma» team from Perm.