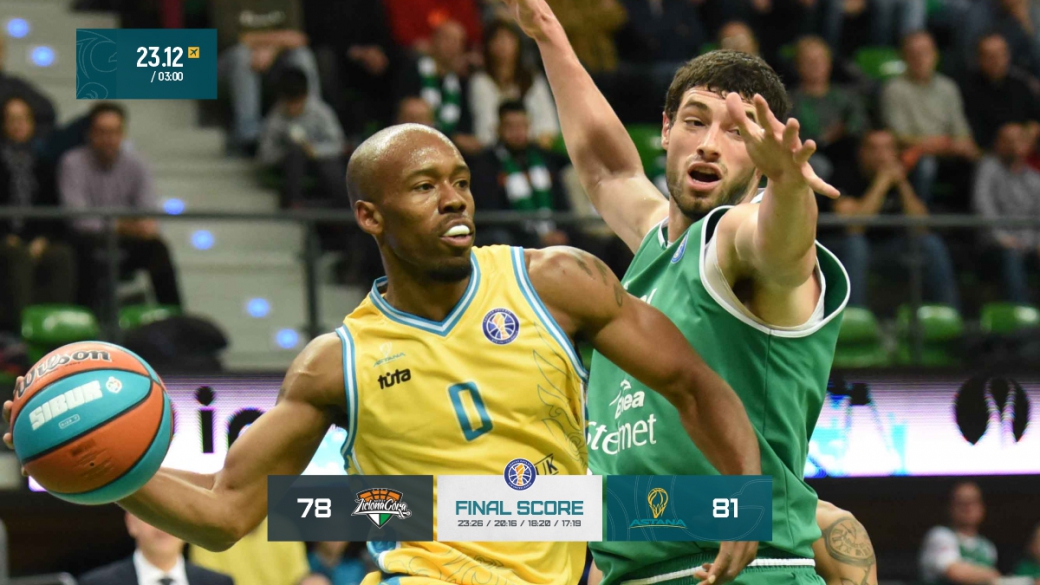 «Astana» got the first away victory in Poland

The Presidential Basketball Club “Astana” wins the last game in 2019, and the victory over the “Zielona Gora” team becomes their first away victory of the season.

“Astana” approached the meeting with the Polish side with four defeats and considering that this was the last game in 2019 for our players, of course, the expectations were high. An important part of the game was the debut of “Astana’s” newcomer James Florence, who previously played for the “Zielona Gora”, and in today’s game, he was a part of the starting five. In addition to him, Malcolm Hill, Dushan Ristic, Alexander Zhigulin and Vadim Shcherbak were the starters.

After the jump ball, the first possession was granted to BC “Astana” and  Vadim Shcherbak opened the score in this game with the three-point shot. In the first minute of the game, James Florence earned his first points in both BC “Astana” and the VTB United League. The game in the first quarter developed very rapidly, especially for the Emil Rajkovic’s players, who took 7 points halfway of the first quarter. However, the Polish team was not going to give up as easily and resisted as good as it could. As a result, “Zielona Gora” imposed a fight and noticeably played the backlog, losing only one point a minute before the end of the first quarter. And yet, our team completed the first quarter with a margin of +3. BC “Astana” was in the lead the whole first quarter, but they managed to hold the role of a leader in the second period not for very long. In the third minute, to the delight of local fans, the Polish basketball players came forward. The Kazakh team was able to again slightly tip the scales in their direction, just a couple of minutes later. The Kazakhs held a fragile advantage until the end of the quarter, but in the last seconds, our opponents were able to come forward and won the first half with a minimum advantage of 43:42. In the third quarter, “Astana” has started strong with Dusan Ristic power moves under the basket, but then the home team again took the role of the leader. Their advantage slowly grew to five points, which was fragile full-time, but during this match was quite noticeable. For the players of “Zielona Gora”, this quarter was quite successful, but they could not get enough acceleration, and towards the end of the third period, “Astana” gradually returned the game to full balance. As soon as the home team relaxed for a second, BC “Astana” nevertheless evened the score in the last minute of the third quarter and eventually won it with a symbolic margin of one point. This advantage did not give any confidence in the victory of our team, and the intrigue was very alive. Naturally, for the last five minutes, an extremely tough fight has unfolded on the floor for each point, and it was simply impossible to predict the outcome of the game. A more vicious struggle took place in the game, and each team understood that any point could be decisive. It was such a fight that took place in the last 10 minutes when “Astana” was in the lead at the start of the quarter, but in six minutes the teams caught up again and everything was still ahead. “Astana” came forward and held such a slight advantage in the game, and in the end, could miss the victory. But the opponent could not score important three points attempt in a few seconds before the final buzzer, after which our guys celebrated the first away victory of the season — 78:81 (23:26, 20:16, 18:20, 17:19).


The hero of the game was James Florence. The debut of the American guard in BC “Astana” uniform was a triumph; Florence became the most effective player of the game, scored 7 three-pointers (repeating the best result of the season) and made a decisive contribution to the finishing spurt of the capital team — 11 points in the final quarter. It’s important to highlight Dusan Ristic performance, who was a few steps from the monstrous double-double — 20 points + 20 rebounds.

The head coach of “Zielona Gora” — Zan Tabak:
- We showed good basketball against a good team. Everything was decided in the last 5 minutes of the final quarter. Unfortunately, at a certain point in the game, we could not score a single point and missed the victory. However, I am proud of how we play and in which direction we are moving.


Head coach of “Astana” — Emil Rajkovic:
- I must admit that this is a big victory for us. This season, “Zielona Gora” is playing very well. I want to thank my players for the important victory over a strong team.

Consequences: Thanks to such an important victory, BC “Astana” climbed two positions, taking 9th place in the standings, and “Zielona Gora” now takes 11th place.

​The next match: on the first weekend of the new year - on Saturday, January 5, the capital basketball players will host “Enisey” from Krasnoyarsk on their floor in the VTB United League. Tickets for the match are already on sale at Ticketon.kz.