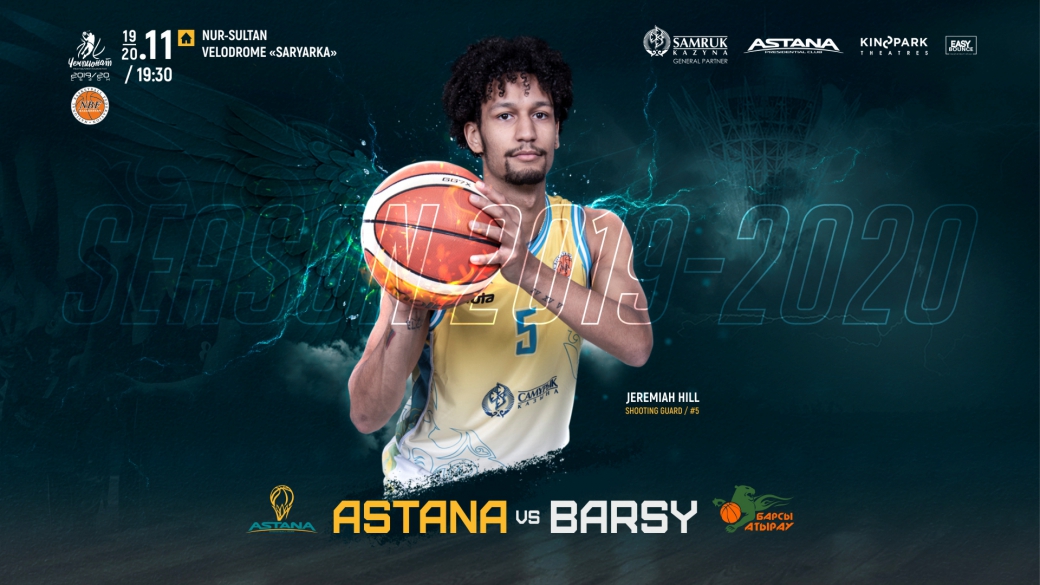 The Presidential Basketball Club “Astana” will host “Barsov Atyrau” on their court as a part of the National League.

“Barsy Atyrau” - is a Kazakhstan professional basketball club from the city of Atyrau, founded in 2003.

Achievements:
This will be a repeated series of games, and the upcoming matches will be the last games between the teams in the National League regular season this season. The previous two games took place in Atyrau less than a month ago. Then the capital team did not leave any chances to the rivals, having won both games — 67: 102 and 67:86. After those matches, the Atyrau team held only one game series — on the road they twice beat the Aktau “Caspiy”. Since the beginning of the season, green and white squad has already played 10 matches, having suffered three defeats, in the away series from our guys and once from “Tobol”, and Atyrau has in their asset victories in both series against “Aktobe”, twice in away games with “Caspiy”, and one victory over “Tobol”. The wards of Emil Rajkovic so far go without defeat in the National League, having 8 victories in their assets, and respectively lead the standings with one hundred percent result.

Leaders of opponents: If you look at the roster of our rivals, then the most effective player in the Atyrau team is Kazakhstan center Vladimir Ivanov, who is also the leader in rebounds. An American import, a guard  Bracey Lysander and point guard Ryan Cook bring the team the most points — 15.83 and 14 points per game, respectively. Cook, as the team’s main play-maker, gives out the most assists per game. As for steals, Kazakhstan guard Rustam Utegen is leading in a green-white team in this indicator. The main players of “Atyrau Bars” are Kazakhstani guard Adilkhan Marat and shooting guard Askar Akhmetzhan, as well as Russian defender Igor Savchenko.

Changes in the roster: One of the leaders American Donte Lamont McGill left the team, who did not take part in the first games with our team. Also, two new players joined “Barsy”, and if one of them, the Kazakhstani guard Alexander Chigrin has not yet entered the court in any game, then the American Edward Charles Carter III, had already played two games in Aktau, becoming one of the team leaders. He spent half of last season in “Caspiy”, where he was one of the leaders, and also played against “Astana”. Before Kazakhstan, he managed to play in the championships of Macedonia and Kosovo.

Tournament position: Thanks to victories in Aktau in previous games, “Barsy Atyrau” again climbed to the second line of the standings, but if they lose the matches in Nur-Sultan, then they can go down to the third position again, letting rivals from Kostanay forward. “Astana” is a clear favorite in this series of games, but even if “Barsy” manages to win both matches, our team will continue to lead the standings.
Matches will be held on Tuesday and Wednesday on November 19 and 20 in Nur-Sultan at the site of the Saryarka cycle track. Beginning of matches at 19:30 Nur-Sultan time. Free admission. Online broadcasts of matches will be available on the main page of our website.