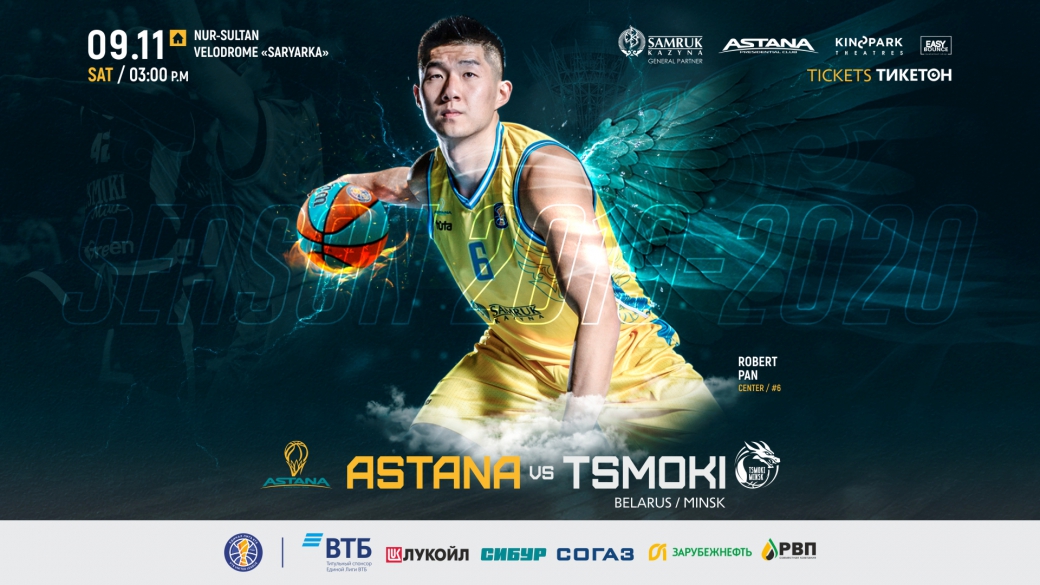 There is never too much basketball! «Astana» prepares for home match against «Tsmoki-Minsk»

«Astana» Presidential Basketball Club, inspired by the victory over St. Petersburg Zenit, is already in full swing preparing for the next home game of VTB United League. This Saturday on November 9, the capital basketball players will receive guests from Belarus — «Tsmoki-Minsk» on their home court.

“Tsmoki-Minsk” - is a Belarusian professional men's basketball club from the city of Minsk, founded in 2006. This season, in addition to playing in the VTB United League and the Championship of Belarus, they are participating in the European Cup.

The title of a head coach is still occupied by Belarusian specialist Rostislav Vergun, who took the post in January last season, and before that, he had in the coaching staff of the Minsk team since 2014. In addition, Rostislav Vergun was the head coach of the Mogilev “Borisphen” for two seasons, while in the 2013/2014 season he was a playing coach.

Perhaps the main loss in the offseason for the Belarusian team was Devon Saddler, an American who, in two seasons as part of “Tsmoki,” received citizenship of Belarus. Also, the team left the imports American Brion Rush, who once played for “Astana”, and the Greek Zisis Sarikopoulos and Montenegr Vladimir Mikhailovic. The team also left a galaxy of Belarusian players who played at the base last season: Nikita Meshcheryakov, Alexander Semenyuk, Alexander Kudryavtsev, and Dmitrшy Poleshchuk. Since last season, only 6 players have extended their contracts, and one of them is American Jamar Abrams, who, however, last season played only one game for “dragons”, and before that he managed to play in Germany, Romania, Slovenia, as well as Japan and Canada. The remaining five in the team are Belarusians: experienced Alexei Trostinetsky and Vitaly Lyutych, Yevgeny Belyankov and young Andrei Rogozenko, but Kirill Sitnik, although he signed the contract for this season, left the team after two matches.

It should be understood that there are a lot of newcomers to the team this season, and it is worth starting from mentioning the foreign players. The first in line are the Champion of Latvia and the Italian A2 series a guard Dominez Burnett and Robert Lowry, yes the same Rob Lowry, who shone in “Astana”, and after Kazakhstan played in Turkey, Poland, and Greece. Serbian guard Branko Mirkovic returned to the “dragons” after three seasons spent for the Estonian «Kalev». French center Alexander Gavrilovic spent 5 years in the USA playing for the Dayton and Tausan teams, then played in his native France for three years, and moved to the Belarusian club from the Bulgarian team. It is worth noting that the Englishman Ryan Martin, who joined the team in the offseason, did not play a single match and left the team. Belorussian Vladimir Veremeenko, will play for the first time for the Belarusian team in his professional career, before that he played for UNICS for a long time, then for Nizhny Novgorod, and his last season was held in Cyprus. Belarusians Maxim Salash and Evgeny Pustogvar returned to the Minsk squad, Maxim after the season spent in “Kalev”, and Evgeniy had been playing in the teams of Russia, Romania, and Hungary over the past 6 years. This season, the team has two more young local players, Maxim Lyutych and Andrey Stabrovsky.

History of games: there are exactly a dozen games between the Kazakh and Belarusian teams, and all of them took place in the VTB United League. Following the results of the last three games, «Astana» celebrated the victory. As for the total score, it is a draw — 6: 6.

Tournament position: the start of the season for «Tsmoki-Minsk» is extremely unsuccessful, they lost all 4 games and close the standings along with «Avtodor». “Astana” before the match has two wins and two losses and is on the 7th line, exactly in the middle of the tournament table.

The match will take place on Saturday on November 9 in Nur-Sultan in the arena of the Republican cycle track «Saryarka», beginning at 15:00 Nur-Sultan time. Online broadcast of the match will be available on our website in the Match Center section, as well as live on QazSport TV channel. Tickets for the match are already on sale at Ticketon.kz.