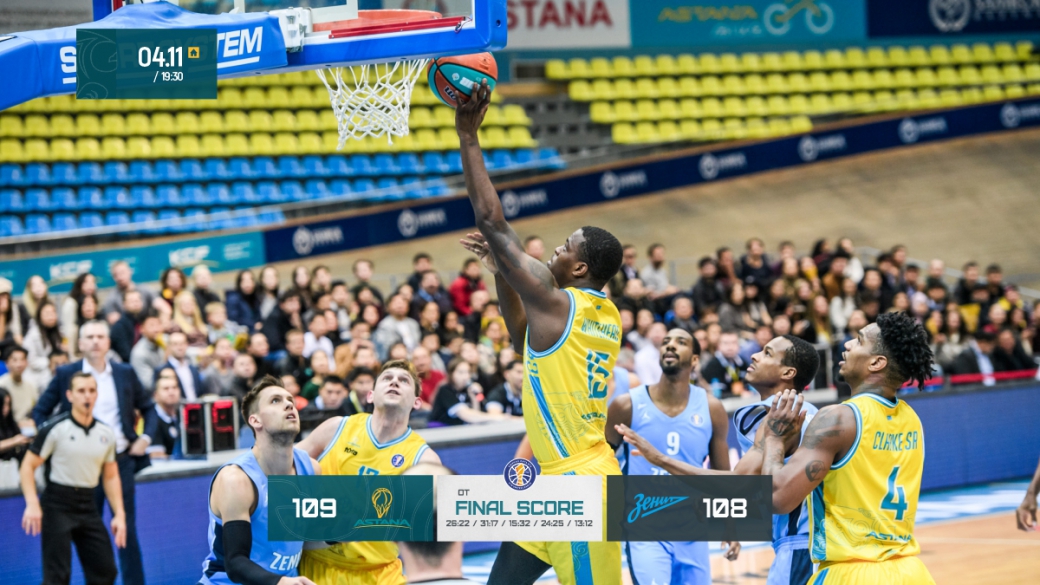 In the home game-thriller against St. Petersburg «Zenit» of the VTB United League, the Presidential Basketball Club “Astana” won in the arduous overtime.

The capital team pleased their fans even before the start of the match by presenting their mascot — the legendary bird Samruk, and for friends and fans of the club just Sam or Sammy. At the start of the match, a ball was won by our guests, but our guys immediately made a steal and the first points scored in the match were recorded on the account of Astana. A spurt of 7 points — this Petersburgers clearly did not expect. And yet, do not forget that “Zenit» is a Euroleague-level team and the wards of Joan Plaza were clearly not going to give their opponents control over the game, especially since in the last three matches they were not lucky at all. Uncompromising competition continued until the end of the first quarter, but “Astana” nevertheless acted much more efficiently. Although their actions kept them in the lead, and even once let them pull away by 8 points, but they still managed to lead just +4 in the first 10 minutes. In the second quarter, the capital basketball players did not slow down but even increased their pace. The team from the northern capital of Russia fought back as best they could. But our basketball players were extremely persistent and were able to impose their vision on the game, and for a fifteen-minute break, they went with a comfortable gap of almost 20 points — 57:39.

Such a gap, on the one hand, inspired some confidence, but on the other hand, they felt uneasy in this situation: +18 lead after the first half in the match against «Zenit». Everyone perfectly understood that they obviously would not leave it like that and would “root the court up” in order to change the situation. In the third quarter, the teams exchanged productive attacks, but then “Zenit” got a second wind. Kazakhs were trying to spot their rivals and trying to maintain their lead, but all their efforts were covered by a wave of Petersburg attacks. The result of the third quarter was completely disappointing for our team -17 for a quarter, and once a comfortable advantage melted to a minimum. Thus, the intrigue remained until the final quarter, during which the teams again fought a fierce struggle on every centimeter of the site and every second of the playing time. Despite the fact that our guests tried their best, but they couldn’t catch up with our team, although they kept themselves at arm's length. And yet they managed to do this thanks to the incredible “three” by the sound of a buzzer. “Zenit” equalized a score- 96:96, which meant that nothing had been decided in the fourth quarter and the teams had to spend at least 5 minutes of extra time on the court.

Anyone who has played basketball and understands this sport knows that if you lead the whole match, and let the opponent to transfer the game to extra time, then this is exactly the opponents who get the psychological advantage and courage and one has to find strength and the right attitude. Emil Rajkovic is a coach who can find the right words and motivate the players, and “Astana” started overtime charged to fight. To say that extra time was spent in a bitter struggle is to say nothing. None of the teams wanted to give away the victory, and during the overtime, and both teams changed the leading role several times. Everything was decided in the last seconds when Isaiah Whitehead scored a crazy three-pointer and brought “Astana” one point ahead. Our guests had 5 seconds to attack and they just needed any shot from the game to win. After another timeout, “Zenit” attacked, but everything turned out in our favor and the incredible victory in this blockbuster thriller remained with “Astana” — 109: 108.

Basketball fans will remember this match for a long time: a thriller in Nur Sultan, which took place according to an incredible scenario and ended with an incredible denouement. But do not forget that this is a match and for its victory, no matter how difficult it was, “Astana” earned 2 tournament points. As a result, “Astana” went up two lines in the standings from 9th to 7th, exchanging places with our current rival “Zenit”, and simultaneously overtaking «UNICS».

Records: “Astana” and “Zenit” updated the season record, having spent the most productive match and having scored 217 points for two. 109 points of “Astana” — this is the second result in the history of the team in the VTB United League. The best result of the Kazakhstan team is 118 points scored in the season 2015/2016 in the match against the Georgian “Vita”.

Hero: of course, such an epic victory should have its own heroes, and, of course, both Dushan Ristic and Jeremiah Hill, as well as all the players of “Astana” who gave all their efforts, deserve this title. But nevertheless, Isaiah Whitehead is worth special attention — a man who today has turned from an antihero into a hero. It was he who could put an end to the game in regular time if he had scored both free throws in the last seconds of regular time. But he scored one throw, and “Zenit” realized a crazy attack three seconds before the final siren and the game went into overtime. This could have broken many, but not Isaiah. He himself decided on a crazy long-distance throw at the end of overtime, absolutely understanding that he did not realize this throw, they could accuse him of “all mortal sins”. But he scores it and takes “Astana” forward. And at the last second, Isaiah prevented the opponents from scoring two points, thereby finally securing the victory for his team. Of course, we cannot but mention the new hero of “Astana” the team’s mascot Sammy, the appearance and support of which certainly contributed to this epic victory.

Head coach of “Astana” Emil Rajkovic:
- Congratulations to both teams for such a battle. «Zenit» had started a little slow since it had several matches in the Euroleague this week, and we used it in the first half and achieved a two-digit advantage. After the break, «Zenit» began to act much better, especially in defense, and they managed to transfer the game to overtime. We had a plan to deliberately foul with a difference of «+3» in our favor, but we did not succeed. In overtime, our players showed character and gained a very important victory.

Head coach of «Zenit» Joan Plaza:
- Fans got a good game to watch. Both teams showed different faces in the first and second halves. We need to be more consistent in our game … It is true that we had three matches in a week, but, nevertheless, there is a big drop in our game. We can’t lose the first half of almost -20 and try to win back in the second half. We are in the process of getting to know each other, testing the tournament and how strong it is. This process provokes such small crises inside the game, and we need to learn how to avoid this in the future. We have no problems with attitude or motivation, with dedication, too, everything is in order. You just need to understand that such periods, when we will need to play many matches in a short time, will happen and be prepared for this.

Next match: «Astana» will continue to host guests of the VTB United League; on Saturday, November 9, the capital basketball players will meet with the Belarusian basketball club «Tsmoki-Minsk» at home. The match will take place at the Saryarka cycle track arena, starting at 15:00 Nur-Sultan time. Tickets for the match are already on sale at Ticketon.kz.