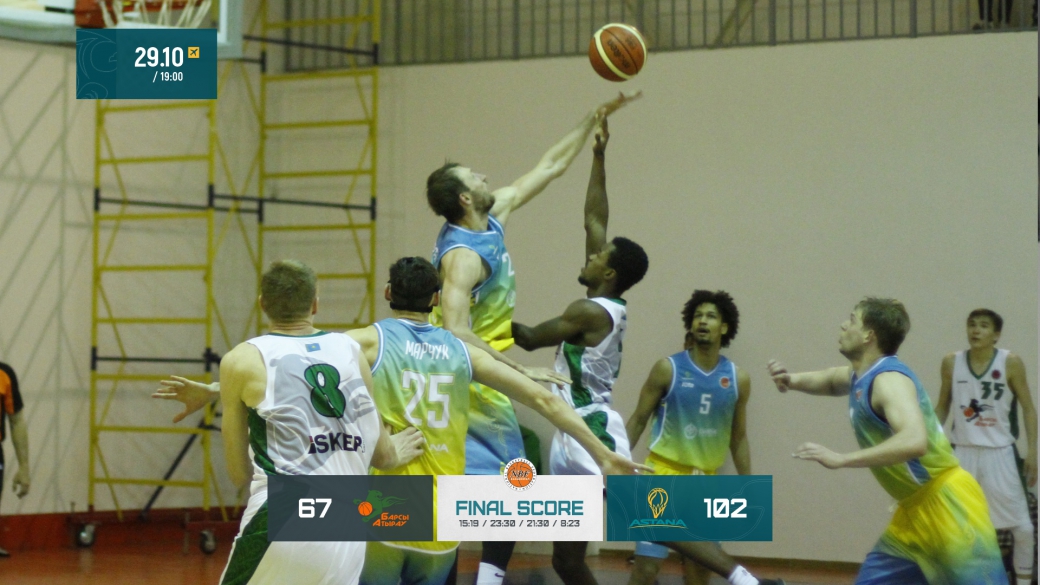 For the first time this season, the Presidential Basketball Club “Astana” scored a hundred, having beaten “Barsy Atyrau” on their court in the first away game.

“Astana” came to Atyrau to play with their principal competitors in the National League, local team “Barsy”. In the first game foreign players, Jeremiah Hill and Malcolm Hill entered the game. The hosts were able to impose a fight on our team at the start of the first quarter, but then “Astana” pulled away, the coaching staff of the “barsy” could only stop their opponent by taking a timeout. The metropolitan team was able to maintain leadership until the end of the first quarter, although it was not comfortable enough — 4 points. In the second quarter, a tough game went on on the court. “Astana” periodically broke away, but “Barsy” were on the top of it all the time and did not let our guys go far. In the middle of the quarter, the gap between the teams reached a minimum — one point, but “Astana” did not allow the rivals to catch up. Moreover, our guys had a much better ending in the first half, so they won it with a score of 38:49.

Players of Emil Rajkovic retained their advantage in the first half of the third period, but the hosts made another attempt to turn the tide of the game, reducing the gap to 6 points in the middle of the third quarter. This only spurred the players of “Astana”, who powerfully spent the last minutes of the third quarter, winning decent 20 points just before the fourth game segment. Astana retained the gained pace in the final period, thereby finally overpowering their rivals. The advantage of the capital team was quickly increasing and 5 minutes before the end of the match it equaled to 30 points, and as a result, our team, for the first time this season, overcame a threshold of one hundred points and won a landslide victory — 67: 102 (15:19, 23:30, 21:30 8:23).

“Barsy Atyrau” were able to impose a fight on our team and quite successfully resisted for more than 20 minutes of playing time, but as a result, they did not have enough strength to maintain the capital team pace and in the last 15 minutes they have lost more than 30 points. “Astana” continues to go through the tournament without defeats and confidently leads the National League standings. Most effective: Alexander Zhigulin was the most productive in this match, and also scored 10 2-pointers and made 10 attempts and eventually scored 26 points, 6 rebounds, 4 assists. Malcolm Hill scored 23 points and made 7 rebounds and 5 assists. Jeremy Hill has 17 points, 6 assists, and 3 steals. Among our opponents, the best players were the Americans Ryan Cook (23 points, 4 rebounds, 3 assists, and 9 steals) and Lysander Bracey (18 points, 6 rebounds, 3 assists).

Next match: tomorrow, on October 30, the teams will again meet on the court of the «Avangard» in the second match of the series. Beginning at 19:00 Nur-Sultan time.