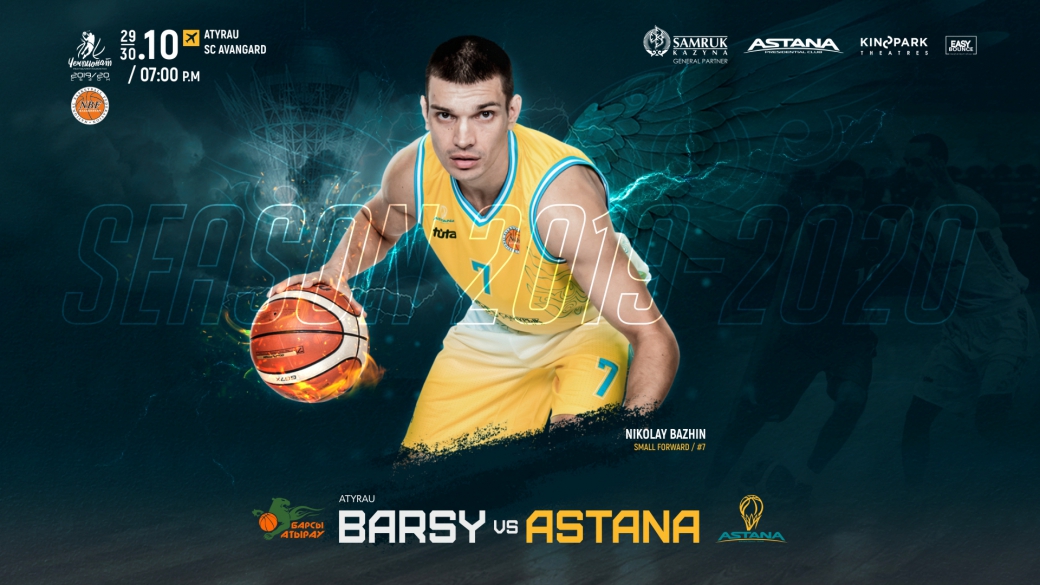 For the first time this season, «Astana» Presidential Basketball Club will be playing with the most dangerous rival in the National League of recent years «Barsy Atyrau».

«Atyrau Barsy” - is a Kazakhstan professional basketball club from the city of Atyrau, founded in 2003.

Achievements:
This season «Barsy Atyrau» is headed by Arnis Vecsvagars, a Latvian specialist who joined the Atyrau team in the middle of last season and re-signed the contract with «Barsy» for this season. Arnis Vecsvagars once coached the Jurmala team, and was also the head coach of the Latvian National Team. In the off-season, the following key players left the team — American Christopher Edward Makichin, Montenegrin Boyan Bakic, Russian Arkadiy Mkrtchyan and Kazakhstani Dmitriy Klimov. And if we look at those who extended the contract with the team, then we see that these are the leaders of last season — American Donte McGill and Kazakhstani Vladimir Ivanov. The team also retained their home-grown players — Oleg Bolashov, Adilkhan Marat, Rustam Utegen and Askar Akhmetzhan. Among the newcomers of the season, the most successful one is Ryan Cook, who had already played for the “green and white” and just in that season, when the “Barsy” became champions. The last seasons Ryan Cook had spent in the championship of Hungary. Also, this season, another American joined the roster of “Barsy” — Lysander Bracey, who for the past three seasons had been playing in the American Student League for Hampton University. In addition, two Russians joined the team: a guard Igor Savchenko, who played in his career in Spain, but spent the last two seasons in the Russian Super League, playing for «Spartak» and «Ryazan». A guard Maxim Sakharov, a pupil of «Khimki» of Moscow region, has spent the last season for the Ryazan team. Still, Maxim Sakharov has not yet played at the court in the National League.

The history of the games: in the entire history the teams have played 60 times in the National League and the Cup of Kazakhstan. Behind “Astana” a huge preponderance of victories in these games. The capital team has outplayed «Barsy» 53 times and lost 7. By the way, «Astana» lost all 7 times in the 2015/2016 season and that’s when «Barsy Atyrau» became champions. As for the last games, this was last season's final series, and then “Barsy” managed to impose a fight on our team, but both matches ended in favor of “Astana”.

Tournament standings:  “Astana”, after four games, leads the league table of the National League, and “Barsy Atyrau” is currently on the second line and is only one victory behind the capital team.

Interesting Facts:
For “Astana” it will be the first games with “Barsy” and a kind of acid test in the Championship of Kazakhstan because the Atyrau team has been the most serious Kazakhstani opponent in recent years.

Matches will take place on Tuesday and Wednesday, October 29 and 30 in Atyrau on the court of «Avangard». Beginning of matches at 19:00, Nur-Sultan time.