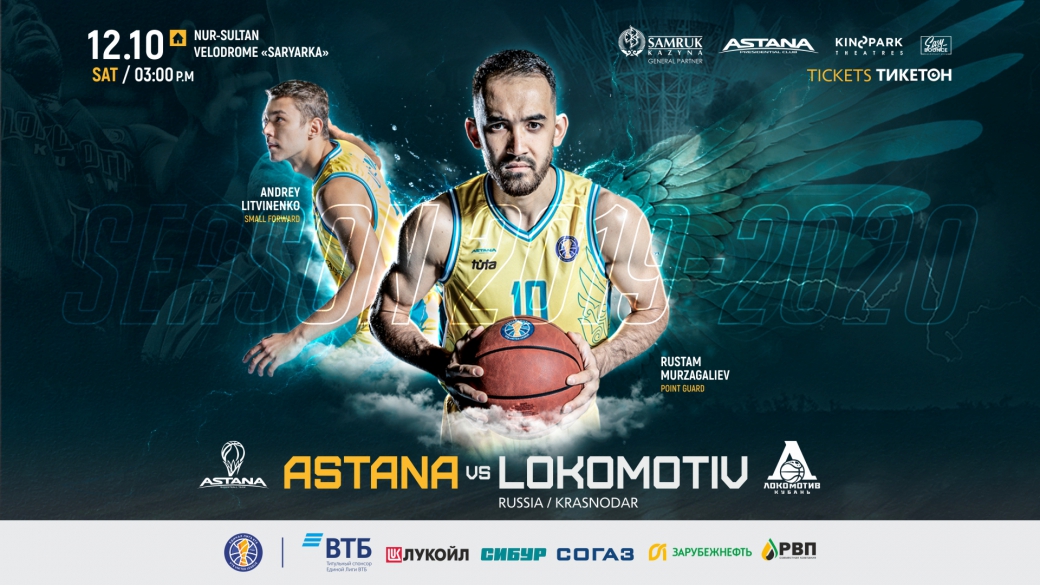 Big basketball is back to the capital! In the first home game of the new season of VTB United League, the Presidential Basketball Club “Astana” will host Krasnodar “Lokomotiv-Kuban” on its court.

«Lokomotiv-Kuban» is a Russian professional men's basketball club from the city of Krasnodar, founded in 1946. In addition to participating in the VTB United League, they play in the European Cup.

“Lokomotiv” is one of the oldest clubs in Russia, which in its history has changed its registration three times. It all started in the city of Mineralnye Vody, in 2003 the club moved to Rostov-on-Don, and the last move was in 2009 to Krasnodar. The main news the last season in «Loko» was the change of the head coach. The Italian specialist Luca Banki, whose team «Olympia Milan» twice became the winners of the Italian Championship, won the Italian Cup, and also the FIBA Intercontinental Cup together with «Athenian AEK» last season, now makes his debut in the VTB United League.

The team roster has drastically changed compared to last season. Perhaps the biggest loss of the team in the offseason is the departure of the American players Dorell Wright and JaJuan Johnson, and of course, the Pole Mateusz Ponitka, who signed with «Zenit». At the same time, they were able to save the Russian key players, these are Vladimir Ivlev, Vitaliy Fridzon, and, of course, Dmitriy Kulagin. Now let's look closer in the newcomers of «Loko». American Johnny O’Bright, who came from the Israeli “Maccabi Tel Aviv”, and previously played in the NBA for «Bucks», «Nuggets», and «Hornets». Another American Sam Dekker makes his debut not on American soil and outside the NBA, and managed to play for the “Rockets”, and “Wizards”, and “Cavaliers”. Mantas Kalnietis is a Lithuanian player with an extremely long career and already well known to the Kuban public, he spent three seasons at «Lokomotiv» (2012-2015) and helped the team win the Euro Cup. With the Lithuanian «Zalgiris», he became the champion of Lithuania four times and won the Baltic League four times. In recent seasons held outside the VTB League, Mantas won the Italian Championship. With his native team, Kalnietis became the bronze medalist of the World Championship and twice vice-champion of Europe.

The game chronicle: “Astana” and “Lokomotiv-Kuban” have played 11 times, 10 of which were part of the VTB United League. The Kazakhstan team was able to beat the Kuban team twice, with one of the victories in the previous season, when «Astana» sensationally beat «Loko» on their court with a decent margin of 19 points — 71:90.

Tournament position: “Astana” and “Lokomotiv-Kuban” played just one game each season. Our guys stumbled in Kazan, and «Loko» won in Minsk. «Lokomotiv-Kuban» shares 3rd and 4th places with «UNICS», while «Astana» and 3 more teams that have no victories yet are at the end of the standings.

A very few games have yet taken place this season, and each subsequent one can completely redraw the standings. Despite the fact that «Lokomotiv-Kuban» had played only one game, it can be said for sure that in the game in Minsk against «Tsmoki» the Russian core and the new imports were those, who snatched the first victory for «Loko». Thus, the wards of Emil Rajkovic once again have to have an acid test in confrontation with a serious opponent.

The match will take place on Saturday, on October 12 in Nur-Sultan in the arena of the Republican cycle track «Saryarka», beginning at 15:00, Nur-Sultan time. Online broadcast of the match will be available on our website in the Match Center. Section, as well as live on QazSport. Tickets for the match are already on sale at Ticketon.kz.