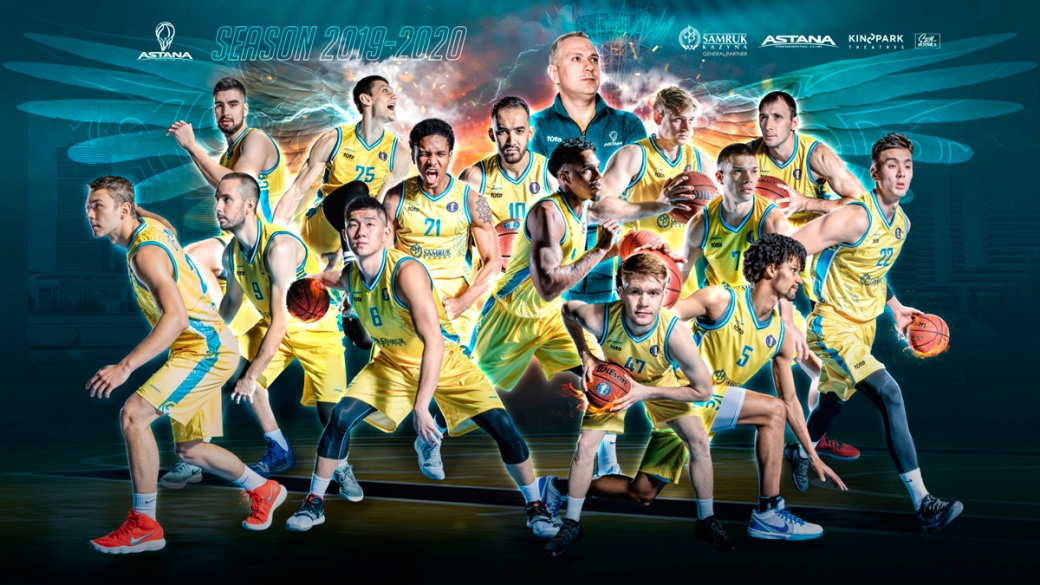 Presentation of the Presidential Basketball Club «Astana» for season 2019/2020

On October 3, in Nur-Sultan city, the traditional presentation of the Presidential Basketball Club “Astana” took place, the main event of which was welcoming the newcomers of the capital's team.

The presentation was hosted by a recognized professional of television and radio journalism, the head of the Media Support Fund, Mahabbat Yesen. The event was held in an unusual format; in one of the halls of the Kinopark movie theater network, which this season is going to be the club’s media partner.

Prior to the official part of the presentation, all guests had a unique opportunity to personally chat with the team players, to take pictures with them and take autographs. In addition, fans who purchased the seasonal passes on the club’s partner website, Easy Bounce Basketball Store, were awarded their season tickets. In the nearest future, the uniform of the Presidential Basketball Club “Astana” and other souvenir products can be purchased in the store and on the Easy Bounce website. The presentation began with a promotional video on the club's new image concept, when a new game uniform of the team was presented. This season, “Astana” pays tribute to the memory of their ancestors and devotes it to the elements of nature, as the main elements of Tengrism. The basis of the concept of the club’s visual image was the legend of the sacred bird Samruk, called up by the capital team as a symbol of striving for new achievements and conquering new heights. As in the legend of the holy tree Bayterek, in which Samruk protects the golden egg, the Sun, from the dragon Aydarkhan, so during the matches of “Astana”, Samruk will protect his wards.

After the opening part, the new team roster and team coaching staff were officially presented to the guests:

Two more Astana players, Ruslan Aitkali, for whom the upcoming season will be the second in the “yellow-turquoise” and the team’s rookie Andrei Litvinenko, who are now at the 3x3 World Cup in China as a part of the National Team of Kazakhstan, could not attend the presentation for this reason. Also, a newcomer and an important member of the team, who will very soon arrive at the club’s location, could not attend the presentation. The team will be introduced to him in a month, on November 4 at the VTB United League home game against “Zenit” St. Petersburg.

The official part of the presentation was opened by Askar Batalov, general director of PPSC “Astana”. “With great joy, I would like to announce that the new season of  “Astana” basketball club, which is an integral part of our Presidential Club, is open. I believe that this is a characteristic mark of the city of Nur- Sultan. This is the pride of our sport. The team that performs at the highest level, and is the backbone of the National Team. I am very pleased to welcome the new players who have joined our team today. I want to thank the coaching staff headed by Emil Rajkovic and our management, headed by Valeriy Tikhonenko for the past season, which has become the best in the club’s history. We have new players, but I believe that the club’s transfer strategy, which has been implemented, will allow us to fight for the highest places. I would like to wish the new season be better than the last. First of all, I would like to thank all the fans for their love of the team, the general partner of Samruk-Kazyna NWFJSC for all possible support and the National Basketball Federation of Kazakhstan for their joint work. ”

During his speech, the President of the National Basketball Federation, Dimash Dosanov, noted the club’s creative approach to image-building and outlined the goals of “Astana” as the principal club of the National Team. “Despite the fact that today “Astana” is the undisputed flagship of Kazakhstan's basketball, it is a hallmark on the international sports arena and the recognized sports brand, the club does not cease to amaze. I mean by that the presented image concept. I am glad that the club competently combined in it both modern trends and paid tribute to the cultural heritage of our ancestors. I hope that the elements of nature will help “Astana”  to reach even greater heights in the coming season. As for the sports process, after the New Year, we are all waiting for the start of the Asian Cup Qualification 2021, for which we have already begun to prepare. We have high hopes for the capital's club, whose players worthily held the qualifying round for the World Cup as part of the National Team.” In a welcoming speech, the general manager of Astana, Valeriy Tikhonenko, recalled the results of the last season and commented on the updates in the roster. “Firstly, I congratulate everyone on the start of the new season! This is our ninth season, and in a year there will be an anniversary. Any basketball player, who comes to “Astana” improves his own performance. With him, the team improves as well. And when we achieve a result, then this player’s contract grows in price. Almost all the players left with a serious pay increase. We wouldn’t want to [let them leave], but we can’t hold them back. As for newcomers, the season will reveal their potential. After all, we are at the very beginning. One thing is good — we signed our young Kazakhstan guys and are putting our hopes on them. These «kids» that are behind me (Tikhonenko pointed to the club players), I think, they will do their best on the court. And despite their small stature, they will fight as hard as they can. I want to wish patience to the fans. We have a practically new team, but we will try not to disappoint you. We will put our best foot forward.”

The head coach of the team Emil Rajkovic also spoke about the newcomers. According to him, it was possible to pick up a quality gain before the start of the difficult season of VTB United League, where the capital club again plans to get into the playoffs.

“Last season has been the best in the history of the team. The players have spent the best season not only for the club but also for themselves. And they, of course, have risen in price, and we have a certain limit in the budget. We invited young guys to help them develop for the good of our team. Yes, the season will not be easy, but every successful match is a step forward for us. Kazakh players must progress. Last season showed what we are capable of, a small miracle. You need to move gradually, step by step, from game to game. And everything is possible. If we raise the level in the club, there will be progress in the National Team.”

The handover of the «Astana»’s jerseys to the newcomers became a pinnacle moment of the presentation. One of the most key moments of the presentation was the official retirement speech of the permanent yellow-turquoise team captain Rustam Ergali. “Today, on the eve of the new basketball season, on the day of the presentation of the club, which brought together the closest and most important people in my life, perhaps is the best time to officially announce that I decided to retire for professional basketball. I made this decision for a number of reasons. Firstly, these are health issues. Secondly, I would like to continue to benefit basketball in our country. I have given basketball 22 years and always tried to do my best. Over the years, basketball has become an integral part of my life, it has become a part of me. Basketball taught me to overcome myself and take responsibility, basketball gave me countless bright and unforgettable moments in my life. Thanks to basketball, I made faithful friends who became brothers to me. But, despite the fact that I retire as a player, I still remain devoted to basketball and our club. Not in word, but in deed, I will continue to contribute to the development of «Astana» and the entire Kazakhstan basketball, but in a new role — as the executive director of the club. My first priority and goal in my new position is the development of  Astana Children's Basketball Academy.”

Rustam thanked the leadership of PPSC “Astana” and PBC “Astana” for their support and expressed hope that he would find the application of his knowledge not only in working with the Academy but also for the National Team of Kazakhstan, which he also gave many years to. At the end of his speech, Rustam Ergali greeted the new captain of the team, a point guard Rustam Murzagaliev.

At the end of the official part, the host on behalf of the club expressed gratitude for the support to partners, the media and the fans:

“We are pleased to be part of the huge family of the Presidential Professional Sports Club «Astana», which includes the football and cycling team «Astana» and the hockey club «Barys». We express our deep gratitude for the support to the General Partner, Samruk-Kazyna National Welfare Fund, as well as to the partners of the club the Kinopark movie theater network and Easy Bounce basketball store. We hope for long-term cooperation and, in turn, will strive for even greater sports results and achievements.

Special thanks to the media Sports KZ, Prosport KZ, and Vesti KZ, which actively covered matches and other events of the Presidential Basketball Club “Astana” throughout the past season. Active work with the media is one of the priorities of the capital's club. Thanks to the joint constructive work, we not only successfully cover events in the life of the team, but also contribute to the development of Kazakhstan's basketball as a whole. We are open to partnership and look forward to furthering fruitful cooperation.

All fans and spectators  of “Astana” will definitely enjoy an interesting and exciting season. We look forward to seeing you at the matches and wish to have extremely positive emotions from the best ball game performed by “Astana”. We always remember who we play for, and your support gives us the energy to overcome the most difficult obstacles. You are always with us: in times of success, and in times of failure. In every game, we feel your support and we know that we are never alone. Thank you for that! Thank you for the indescribable atmosphere that we all create together at home matches, and which makes our club really special.”