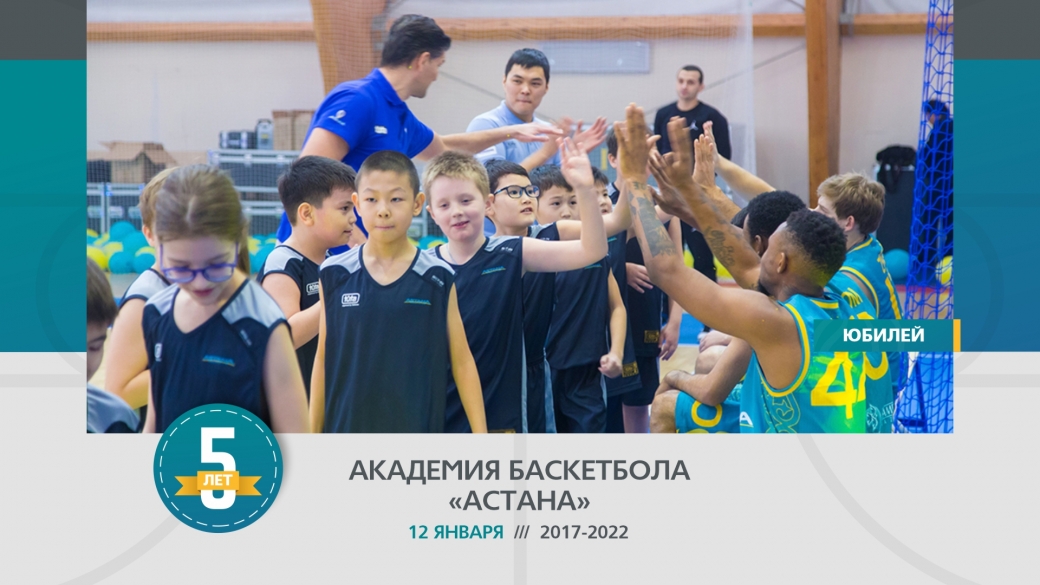 Exactly 5 years ago, on January 12, 2017, the opening ceremony of the children's Academy of the basketball club «Astana» took place in the capital at the sports ground of Nazarbayev University. In such a short period, the Academy has successfully developed and has already brought its first fruits, which we will talk about in our article.

The idea of opening the Basketball Academy was nurtured by the organizers for several years, and in 2016, complex work to implement the project began. The main goal of the Academy was to form a solid base for the development of basketball in the country, followed by higher sports education. The long-term project of the Academy to educate high-class Kazakh players included participation in the republican youth championships, the creation of the club's farm team, and, ultimately, attracting the best students to the main team.

To achieve the set goals, the work of the Academy was initially aligned per international requirements, and professional equipment and all the other necessary gear, including uniforms for children, were purchased.

From the moment of its foundation to the present day, the head coach of the Academy has been the Serbian specialist Dejan Parezanin, who came from the «Partizan» basketball club system, one of the best in training children and cadets of the old world. He spent his entire coaching career working with children and young teams in Serbia, the teams under his leadership also played in the Euroleague. 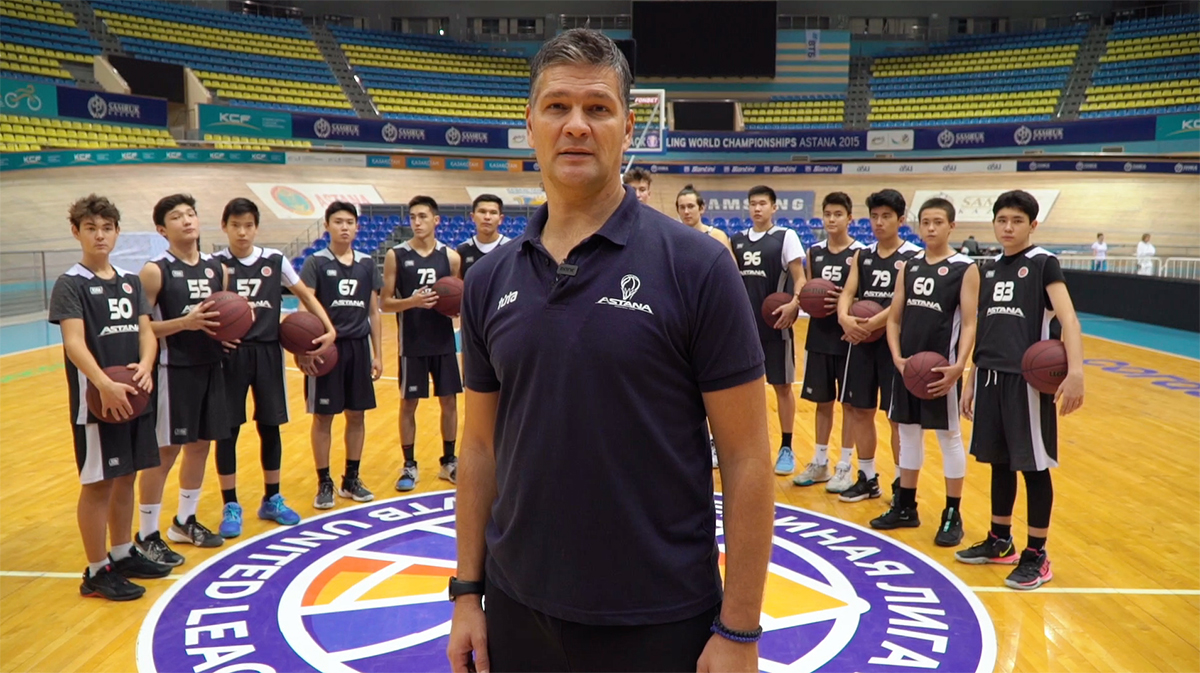 Dejan's coaching journey started about ten years ago in Bosnia. He worked in the system of the basketball club «Bosnia», where he conducted the scouting. His wards have won several tournaments in their age groups. In the 2010/2011 season, Bosnia led by Parežanin was the youngest team in the national tournament, but this did not stop them from reaching the semi-finals of the Cup and winning the Premier League. In the 2013/2015 season, he worked with the youth squads of the Belgrade club «Mega Vizura»: the under-18 team played in the Euroleague in its age category. The last place of work was the KLS club, the farm club of the leading Serbian team «Vojvodina», where Parezanin was the head coach.

Also today, the assistants to the head coach are two young Kazakh coaches Anton Kirin, who has been working at the Academy from the beginning, and former player Vladimir Formazonov.

One of the main reasons for inviting a foreign specialist is to share their experience with home coaches and also to develop Kazakhstani basketball in terms of teaching. At the same time, the coaches of the Academy are faced with the tasks of the harmonious physical and intellectual development of children in the game, educating them in leadership qualities and the ability to work in a team, and, of course, organizing their cultural leisure.

After the completion of the first season in the Academy in July 2017, the first summer basketball camp for school children took place at its base. The initial idea of the camp is to develop children's and youth sports, form discipline, and sports education in children and adolescents. Children aged 7 to 15 years old were the debutants of the first basketball camp in Astana, who, as part of a specialized course, studied the basics of basketball and practiced their skills with the coaches of the academy.

The program of the two-week course included an intense training process, as well as watching the best games of the National Basketball Association as a lesson in-game tactics and the development of analytical and team thinking. 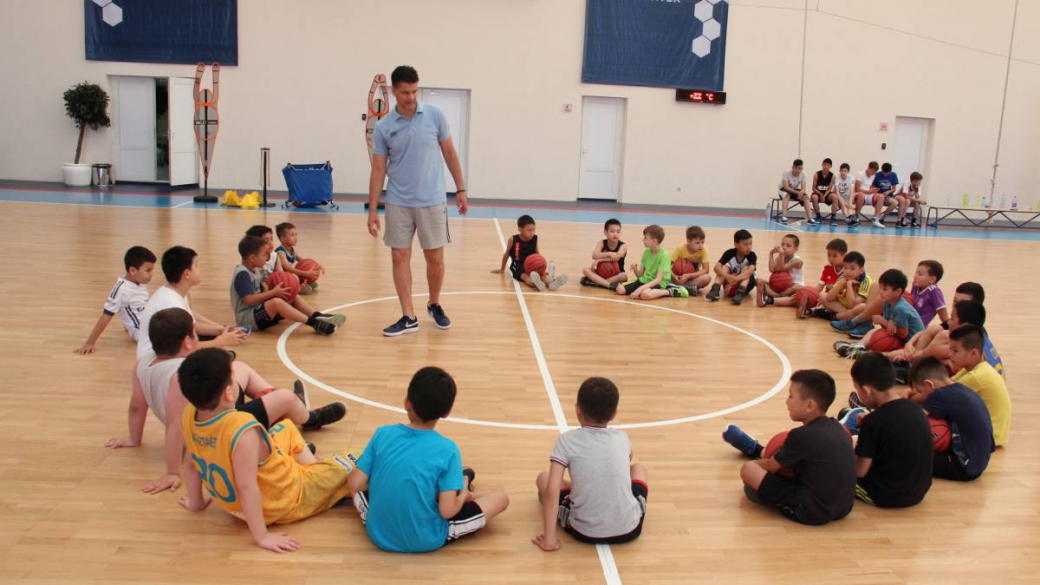 Events and guests of the Academy.

Over the years of the Academy's work, engaging events and meetings with interesting guests have become an additional motivation for its students.

In October 2017, one of the training sessions was attended by the former famous basketball player of «Real Madrid» and the Spanish national team, and now the agent of BDA Sport, Enrique Villalobos, and a well-known sports manager, with 22 years of experience in the Spanish club «Unicaja», and now Chief Operating Officer for Scouting, Manolo Rubio. The guests from Spain did not visit the training process empty-handed, the functionaries presented the children with the attributes of BC «Unicaja», and the basketball boards for the training process of the famous Spanish club from Malaga to the coaching staff. 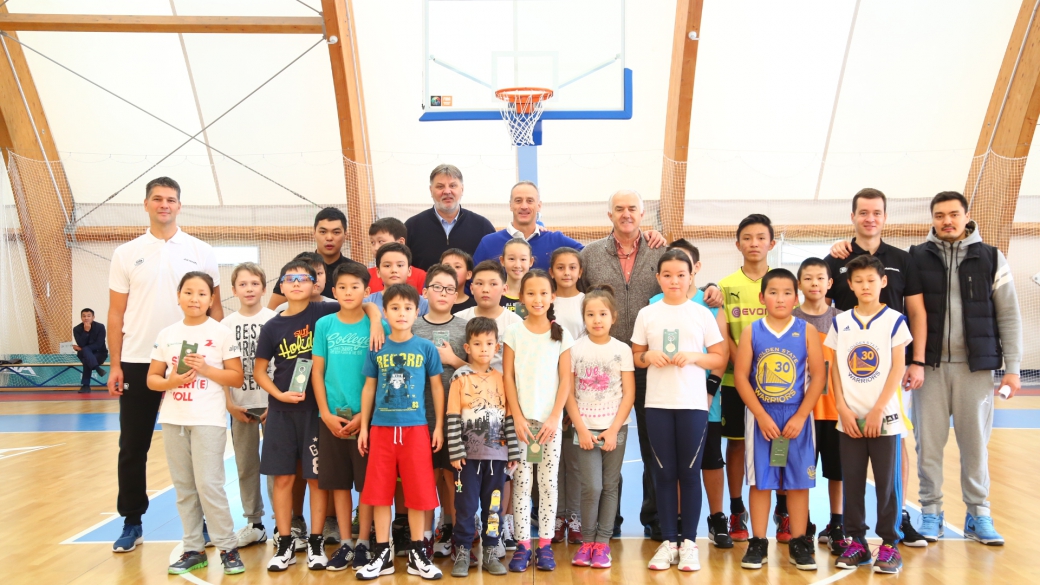 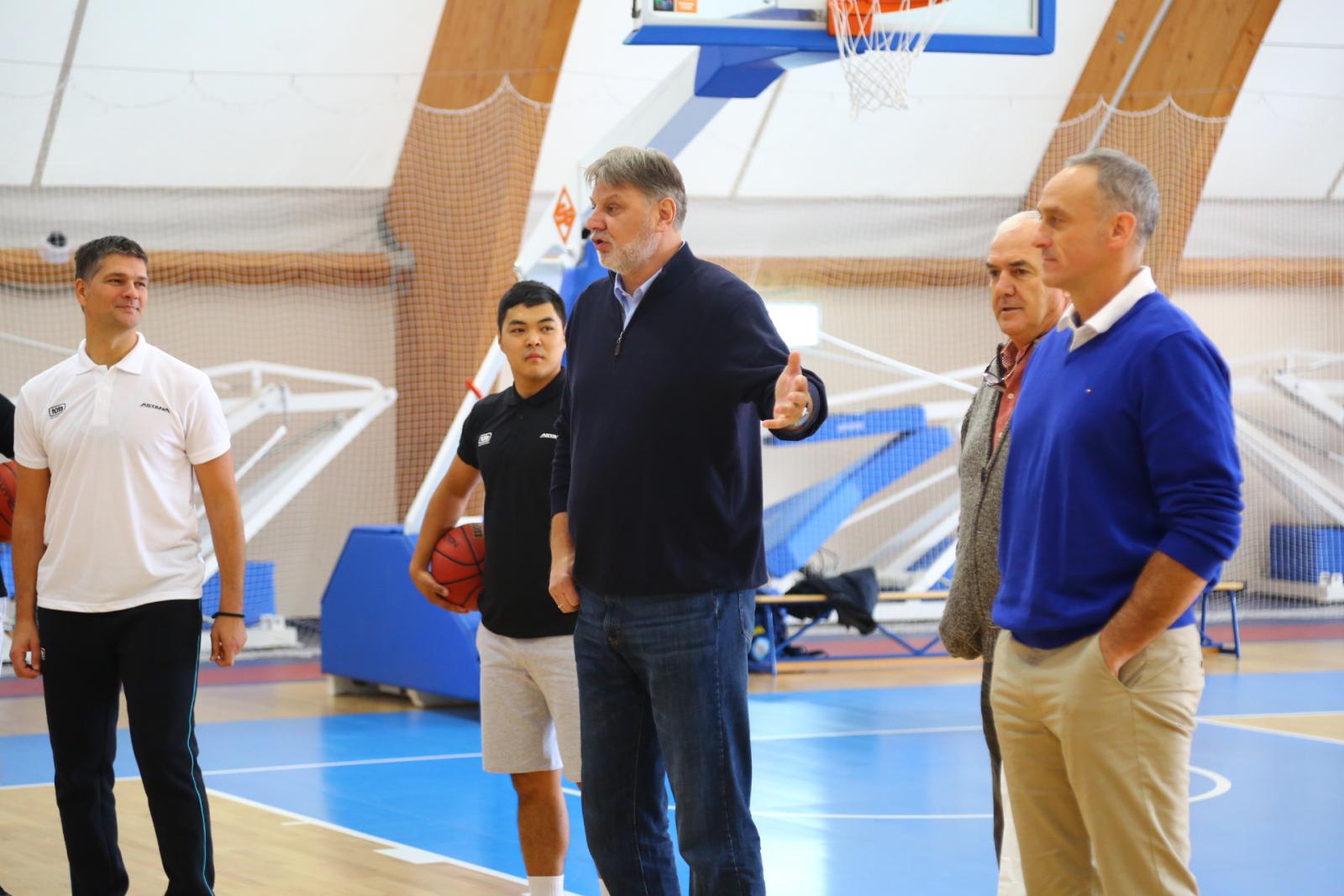 Also, within the framework of Zharmukhamedov’s visit to Astana, a private screening of the film “Upward Movement” took place, which tells about the legendary victory of the Soviet basketball team at the 1972 Olympics. The premiere was attended by students of the academy and basketball players of the main team of «Astana». 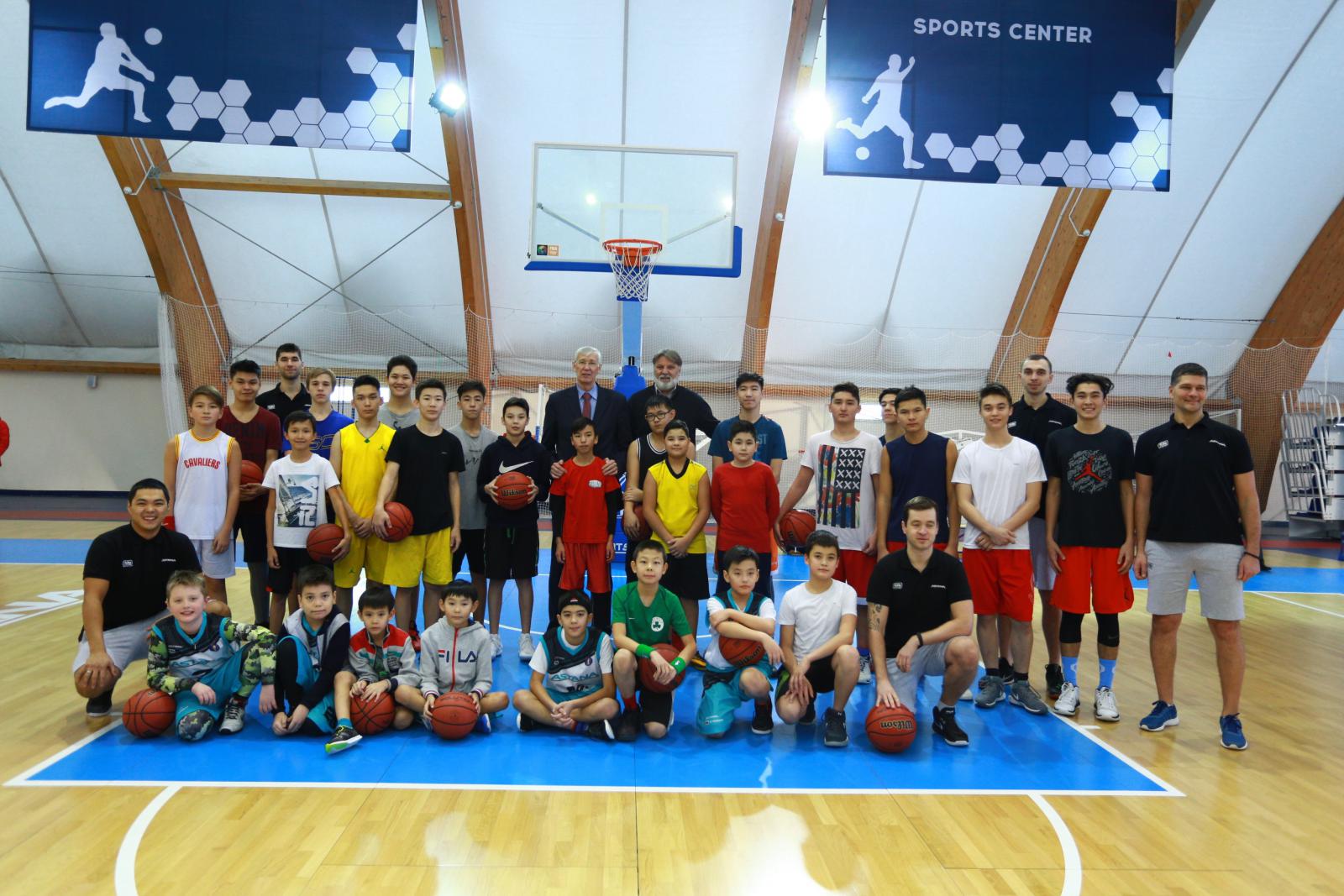 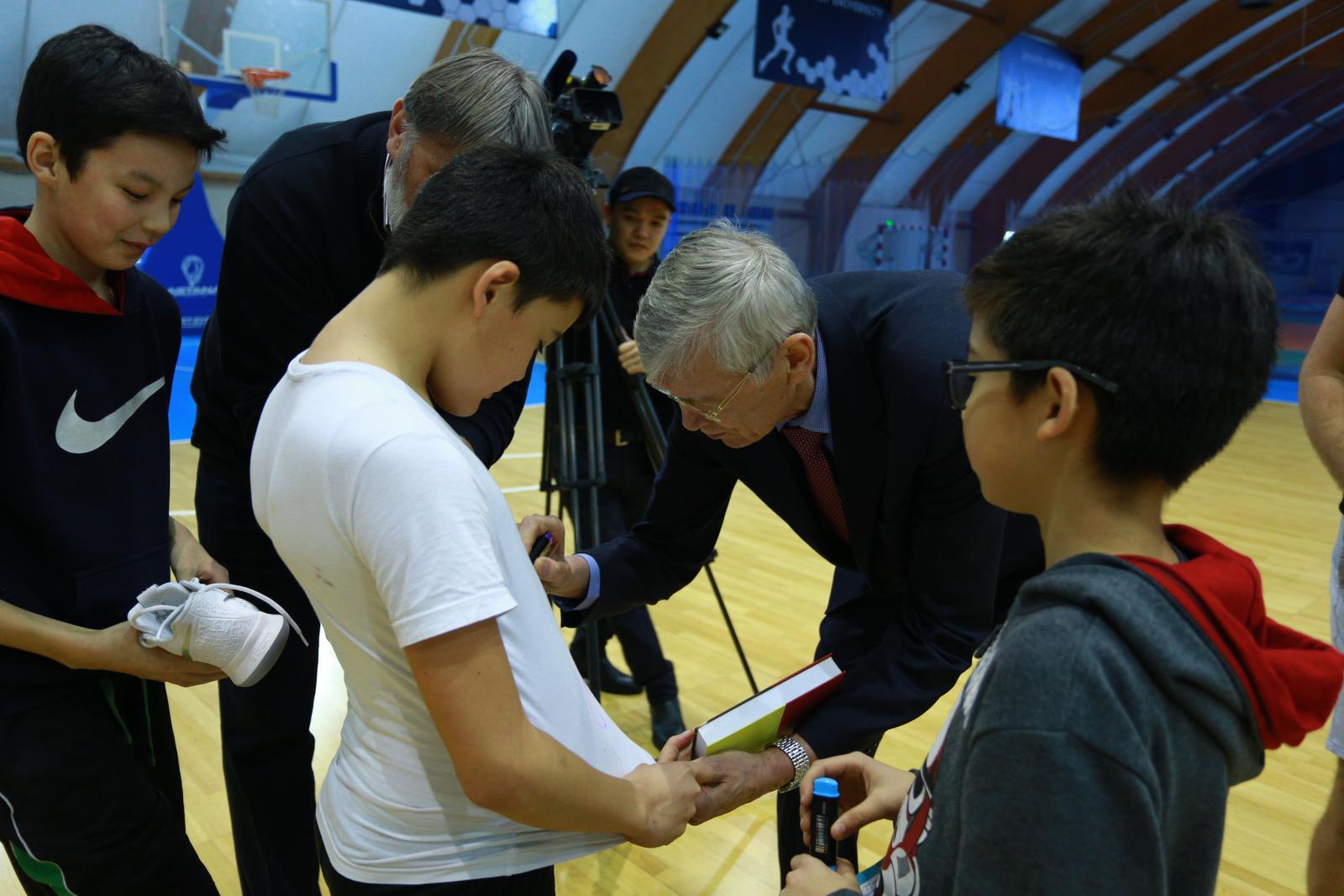 In June 2019, at Nazarbayev University, based on the Academy, with the support of the National Basketball Federation of Kazakhstan, an interesting social experiment took place; young basketball players and pupils from orphanages of Nur-Sultan and Akmola region met on the court, taking part in the football camp «AC Milan Junior Camp» organized by the international company «E-venti».

Academy coaches held a master class for children and introduced them to the basics of playing basketball. This event was not only of a sporting nature but also became an important step towards establishing communication between peers from different social strata. Children from orphanages with great pleasure got involved in the learning process and it is possible that in the future one of them will choose basketball as their main sport. 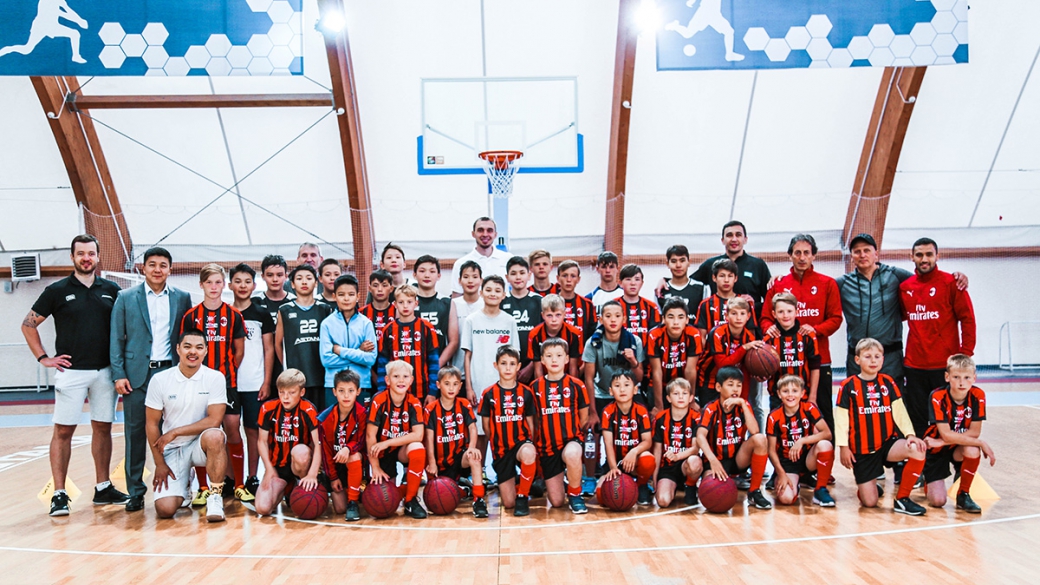 On February 15, 2019, on the eve of the home match of the basketball club «Astana» against «Khimki», the students of the capital's basketball academy met with the players of the Moscow Region team. Players Sergey Monya, Egor Vyaltsev, and Stefan Jovic had a conversation with children about how to set and achieve big goals in basketball, and what you need to do to always be in good shape. 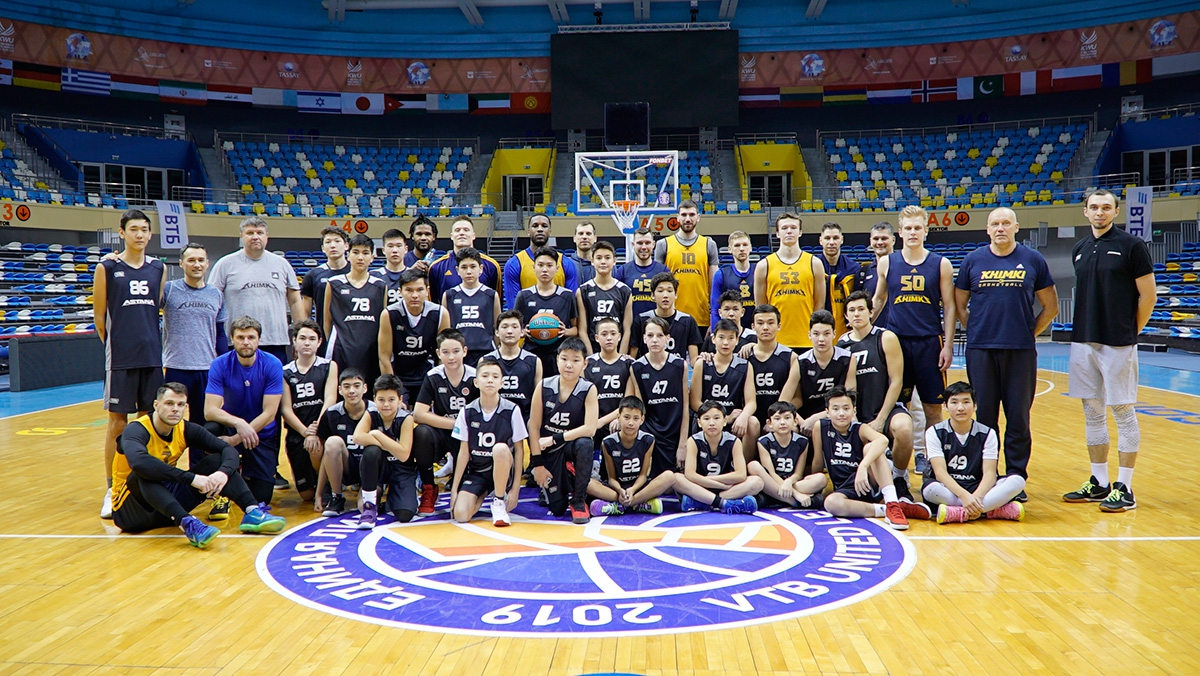 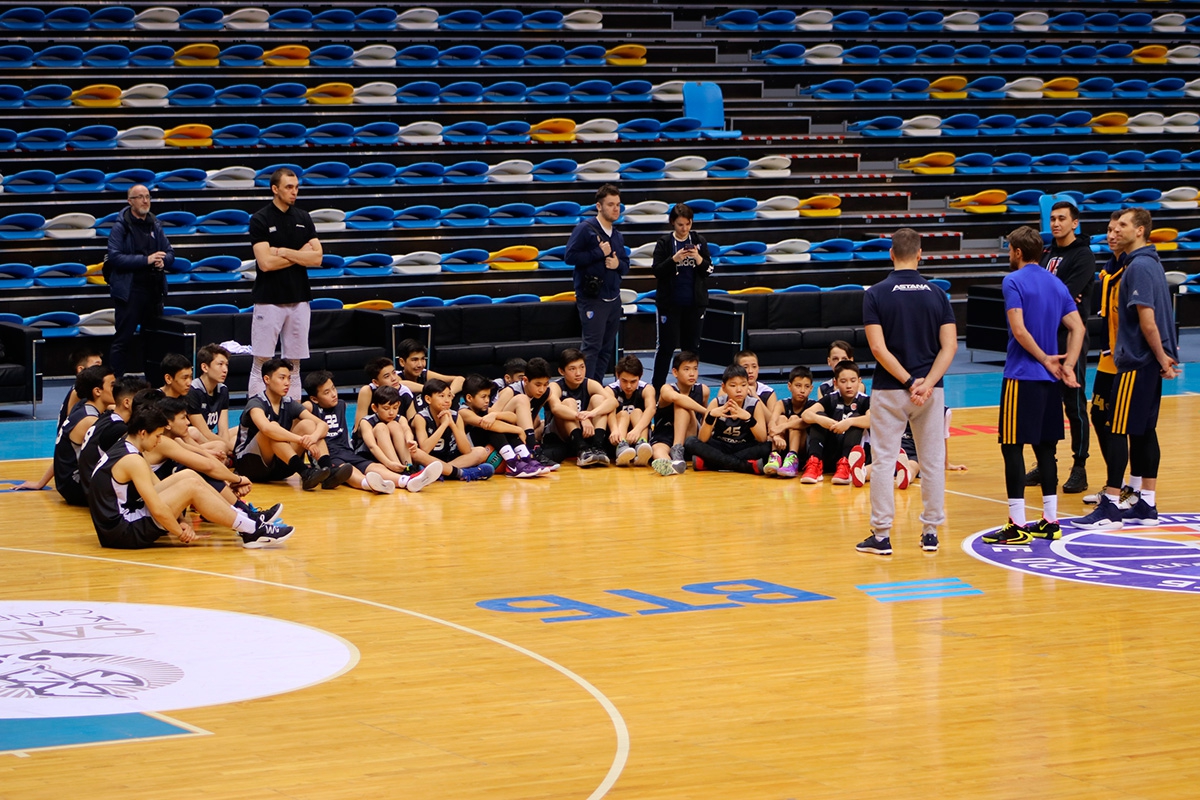 From May 20 to May 22, 2019, in Taraz, on the court of the Taraz Arena Sports Complex, the Asian Championship among juniors U-16, the qualifying tournament of the FIBA Central Asian region, was held, the winner of which was the youth team of Kazakhstan under the leadership of the head coach of the Academy — Dejan Parezanin.

Our guys fought for a ticket to participate in the main international basketball tournament among national youth teams in the continental zone of Asia and Oceania with the teams of Uzbekistan, Kyrgyzstan, and Turkmenistan. 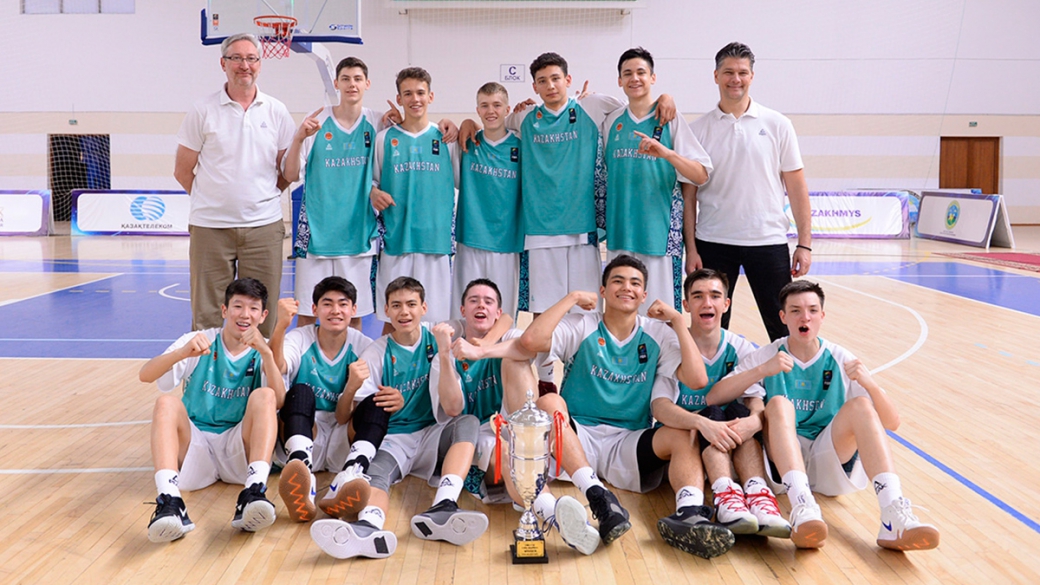 In December 2020, a series of educational videos «Basketball Basics» was released, it was prepared by the National Basketball Federation of Kazakhstan in conjunction with the Children's Academy of the Astana Basketball Club, commissioned by the National Scientific and Practical Center for Physical Culture of the Ministry of Education and Science of the Republic of Kazakhstan. The author and presenter of the lessons is the head coach of the Astana Basketball Academy and the mentor of the youth national basketball team of Kazakhstan, Serbian specialist Dejan Parezanin.
⠀
This project was developed specifically for the educational online program of school distance learning and includes 10 full physical education lessons about basketball, which are available for viewing on our YouTube channel. 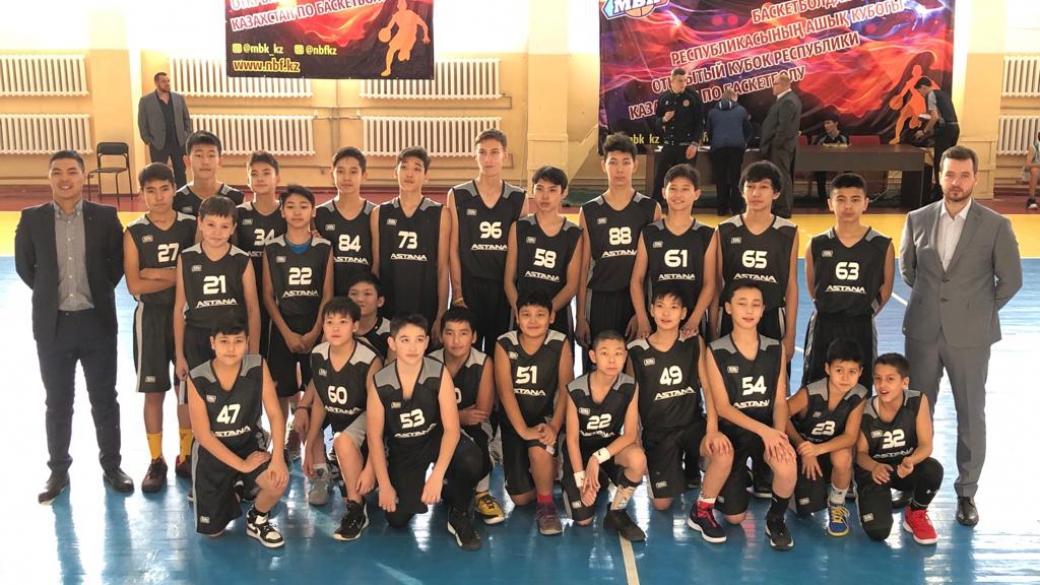 For the first time, young basketball players from the capital won a prize a year later in December 2019, again at the Kazakhstan U-14 Cup in Shchuchinsk, winning bronze medals as a result. It should be noted that earlier at the Summer Championship in the same age category, our guys finished in the last 11th place, but did not give up and properly prepared for the Cup. 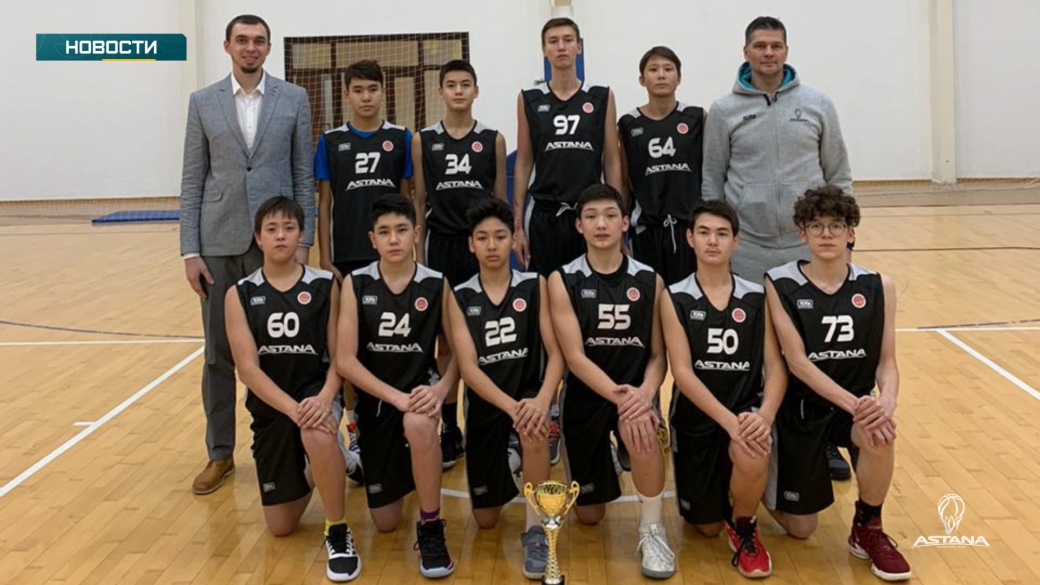 The active participation of Academy teams in tournaments began in January 2021, after the easing of quarantine measures related to the COVID-19 pandemic.

According to the results of the Winter Championship U-15 and U-17 in Shchuchinsk in the senior age category, Vladimir Formazonov's wards took the final 7th place, and in the junior team of Anton Kirin finished in 6th place. 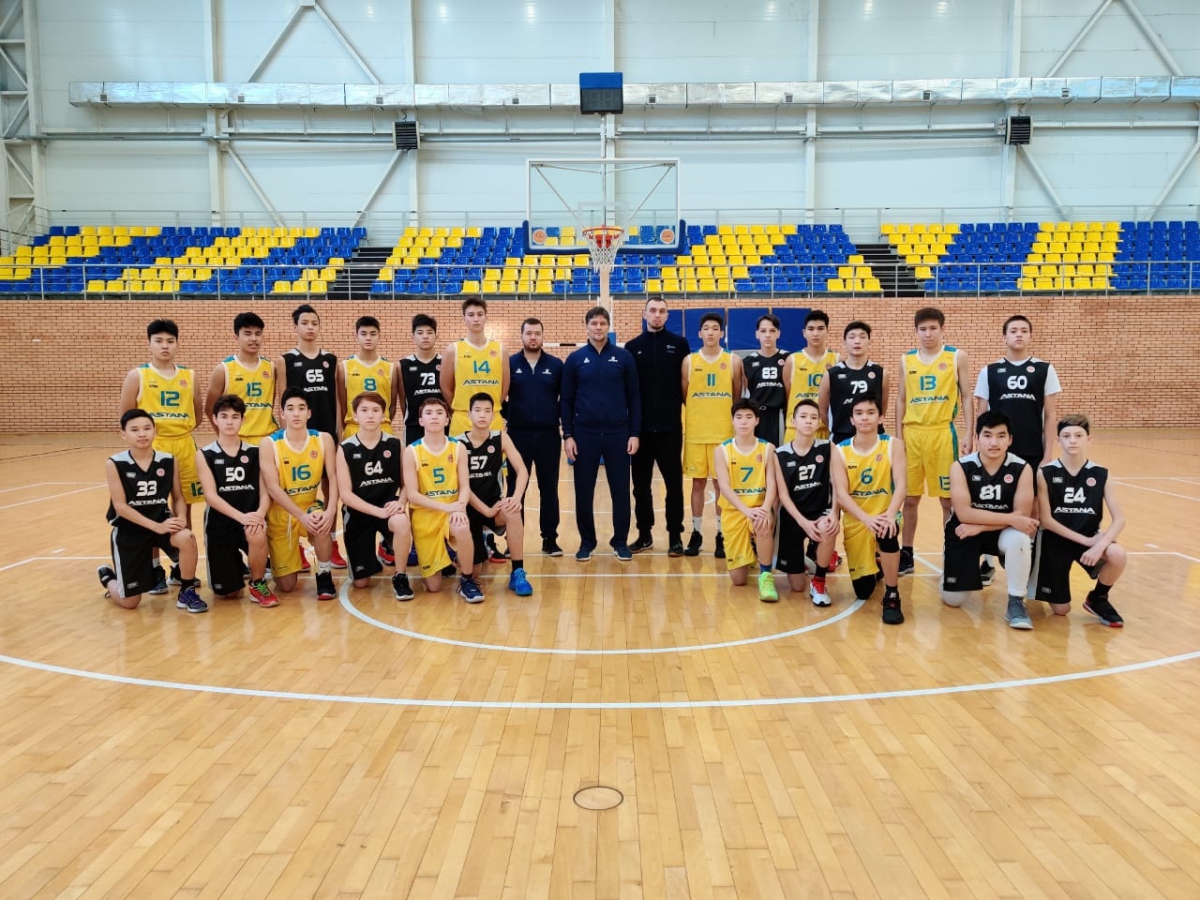 A separate reason for pride is the fact that Askar Serimbet, a graduate of our Academy, was recognized as one of the best players and entered the symbolic five of the tournament in the U-15 age category. 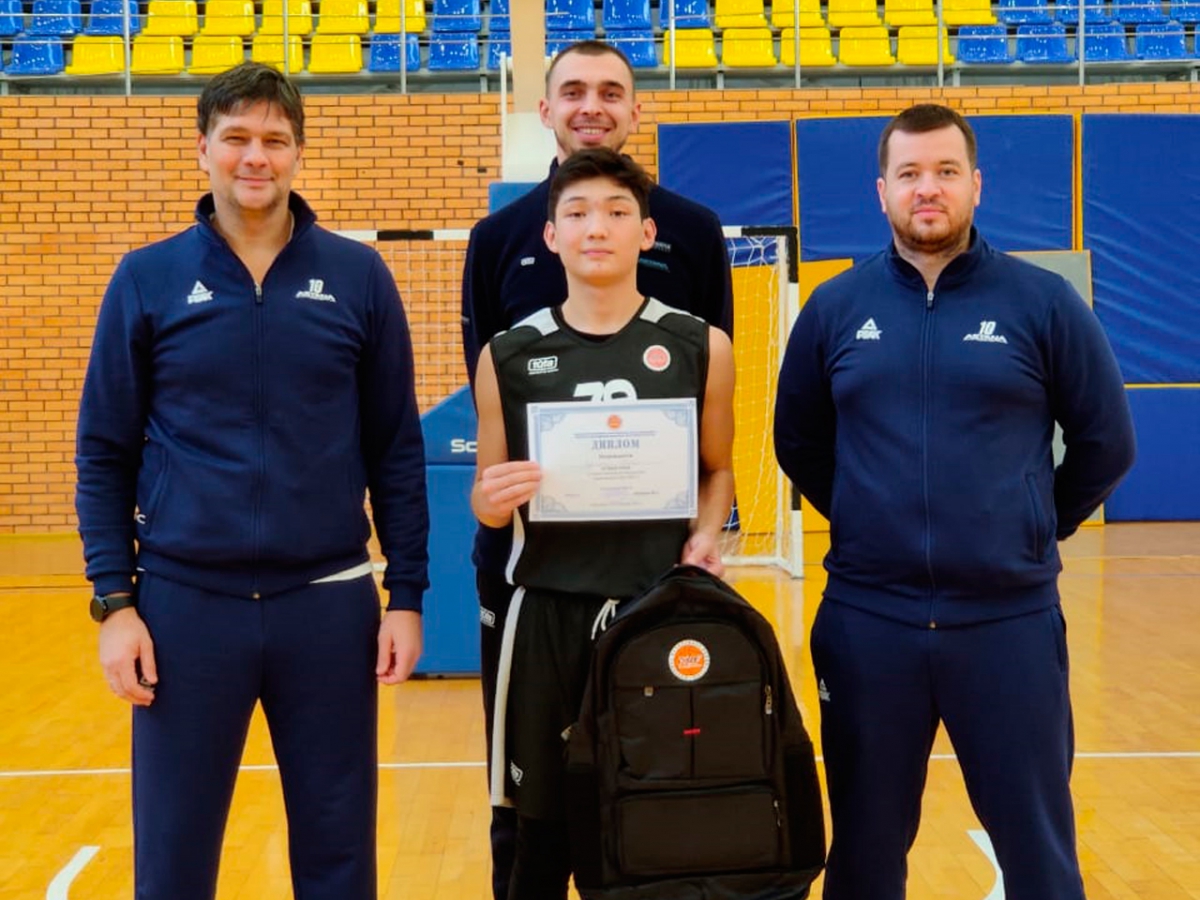 In March 2021, the Astana Basketball Academy team won bronze at the U-15 Spring Championship, which was held in Shchuchinsk. In addition, one of the leaders of the capital's team, Askar Serimbet, was again recognized as one of the best players and entered the symbolic five of the tournament. 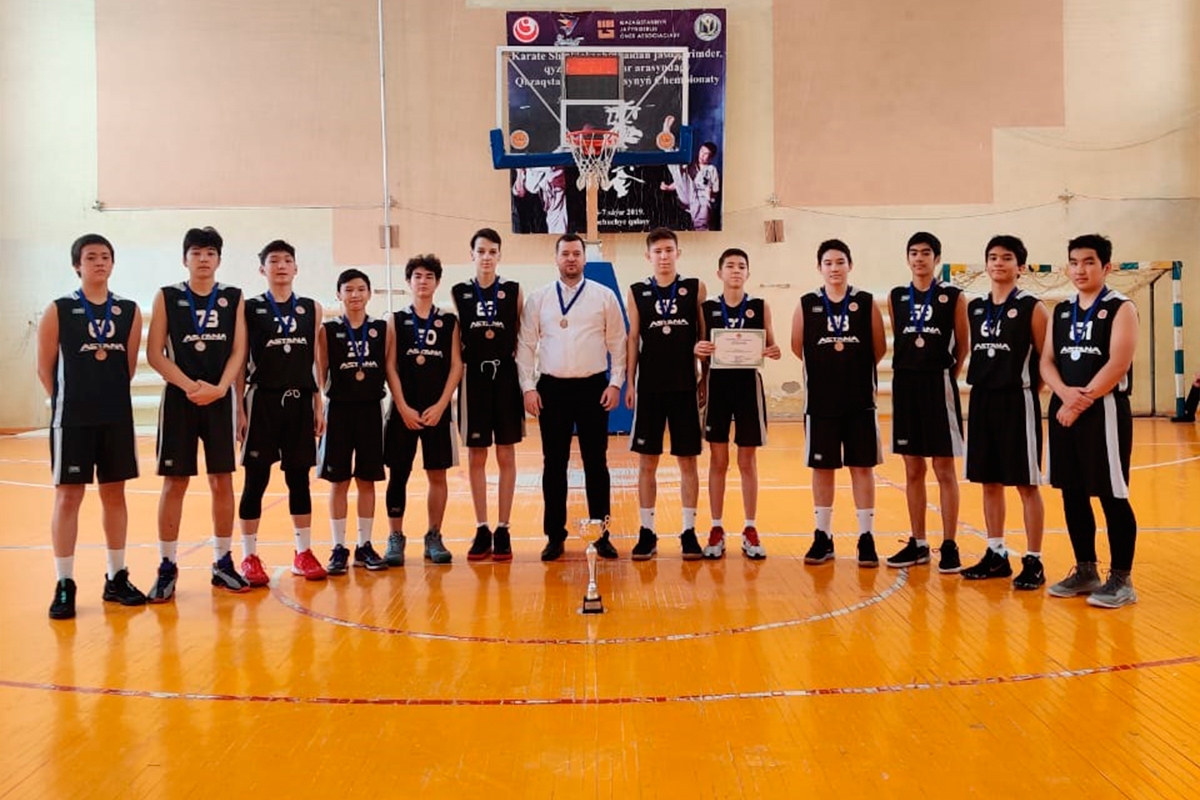 The capital's youth got their first silver at the U-16 Summer Championship. In the round tournament, our guys won six confident victories and lost only in the final game to the champions — the Atyrau team. In the age category U-14, our team took the final 9th place.

The Academy team brought the third bronze medal from Almaty following the results of the U-15 Autumn Championship, and Askar Serimbet was once again recognized as one of the best players and entered the symbolic top five of the tournament. Towards the end of 2021, the junior team of the Academy took 6th place at the end of the U-14 Winter Championship.

The next important step in the development of the Academy was the creation on its basis in September 2021 of the farm team of the «Astana» basketball club with the assistance of the Sport Qory Tourism and Sports Industry Support Fund to participate in the Championship of Kazakhstan among men's teams of the Major League. The team roster is fully staffed with the alumni of the Academy, and the coaching staff was headed by its mentor Dejan Parezanin. 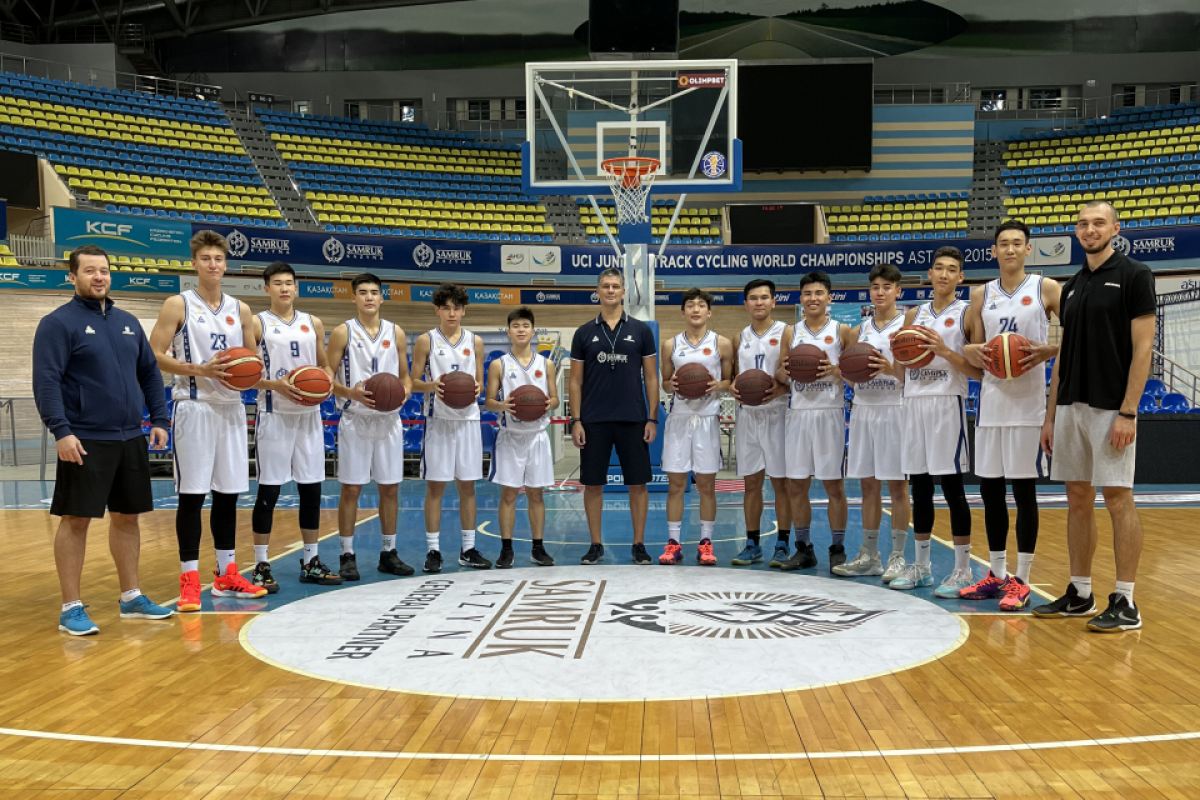 Pupil of the Academy in the «basis».

On the eve of the Academy anniversary, in the December home matches of  »Astana» against «Aktobe», a player from the farm team Alizhan Ydyryszhan, who began his career at the Academy, was included into the team's roster for the first time. After the first two games spent on the bench, in the second series, Alizhan entered the court for the first time, played almost 5 minutes, earned his first point in the National League, and chalked up one rebound.

Congratulations to all those involved in the creation and development of the Academy, pupils, and parents on the first anniversary. We sincerely wish you good health, high vitality, endless energy, and well-being. And of course, we wish you further successful development of our Academy and reaching new heights.

Special thanks to our coaches. Thank you for the efforts that you invest in your wards, in the future stars of Kazakhstani basketball. We wish you not to know the defeat, but always experience only delight and satisfaction from your excellent work. May the highest professional and personal goals be achieved and plans fulfilled.