«Astana» confidently started in the home series with «Aktobe»

Basketball club «Astana» upset the fans of «Aktobe» at the start of the four-match home series. The red and white have three attempts to cheer their fans with a victory before the New Year.

The coaching staff, led by Darko Russo, opted for Americans Jaylen Burford and Antonio Campbell. It is also worth noting that after almost two months of recovering from injury in this match, Vadim Shcherbak entered the court, and a player from the farm team Alizhan Ydyryszhan was announced for the game. The starting five were Jaylen Burford, Antonio Campbell, Oleg Balashov, Robert Pan, and Vadim Shcherbak.

The jump ball remained with our team, and in the first attack, Robert Pan opened his score and the score of the whole match, then Jaylen Barford scored a few more points. However, the opponents did not lag, and after implementing a couple of attacks in a row, they came out ahead. But they did not remain the leaders for long; Antonio Campbell returned the advantage to «Astana», and then the first three in our roster strengthened it. Our subsequent attacks were implemented exclusively by Barford — twice from behind the arc and once after the pass. «Aktobe» did not lag far behind and periodically responded with more shots. After the equator of a quarter, our team went ahead, Ruslan Aitkali, Mark Tikhonenko, Dmitry Gavrilov, and Oleg Balashov recorded points for their set, and our advantage quickly became double-digit. The guests did not cope with such a leap and lagged noticeably behind. At the end of the first quarter, Nikolay Bazhin and Dmitry Gavrilov brought the team points from the free-throw line — 29:16. An equal fight in the second ten minutes did not strongly threaten our comfortable position. Points were earned by Jaylen Barford, Antonio Campbell, and Vadim Shcherbak also recorded their first effective points after almost two months of rehabilitation. After implementing the pass from Dmitry Gavrilov, our advantage exceeded 20 points, which forced the rivals' coaching staff to take a time-out. After that, the difference remained in the region of 20 points until the end of the first half of the game, and Robert Pan, Dmitry Gavrilov, Oleg Balashov, and Nikolay Bazhin brought more effective points in our squad. The opponents managed to narrow their gap a little, but they left for the long break with a deficit of 15 points with the score — 53:38. 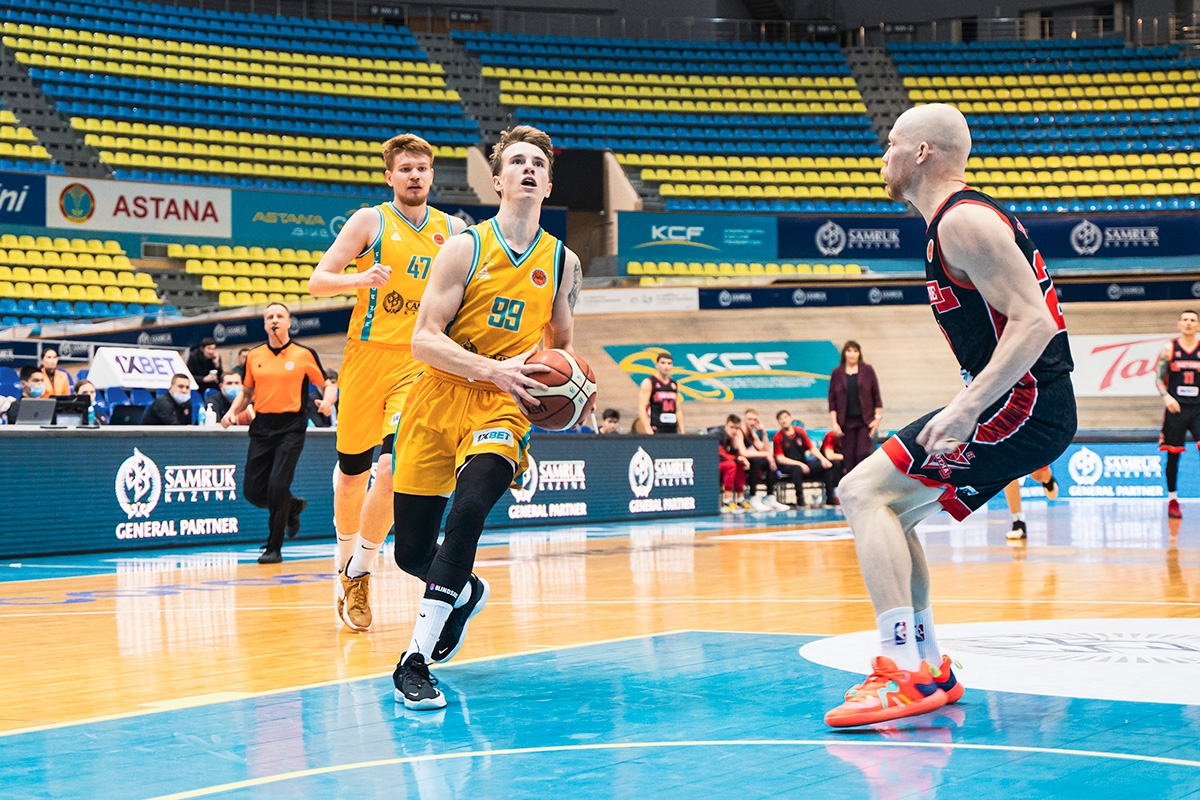 After fifteen minutes of rest, Antonio Campbell chalked up another «and one,» Dmitry Gavrilov replenished his account with two points. Rustam Murzagaliev scored the first points in the game — just from behind a three-point arc. Nikolay Bazhin scored two points before the equator of the third period, but the absolute difference in the score did not change much. Then the scales of the game tilted in our direction, and «Astana» began to build up the gap actively. Bazhin scored two more points, another three from the captain flew in, which Aitkali supported with his accurate three-point throw, and then he forced the guests to take another time-out, pushing the ball into the ring in a quick break. The one-minute break didn't slow down the pace of our team's game. Rustam Murzagaliev scored another three-pointer, and Aitkali, in another fast break, again slam-dunked, only now with a 180-degree turn. «Astana» significantly increased its handicap before the final period and, most likely, has already secured a victory for itself — 78:51. After points from Robert Pan, Vadim Shcherbak, and Ruslan Aitkali at the start of the fourth quarter, our team's lead exceeded 30 points. Meanwhile, the opponents could not find their game in any way, and rarely did the throws in their performance reach the goal. In the middle of the period, which was not very productive, Robert Pan scored twice. Our team did not score points for the next three minutes, and the rivals were accurate only once. But then Murzagaliev was precise again from behind the arc, and after him, three attacks in a row remained with our players — Litvinenko, Gavrilov, and Tikhonenko scored two points each. At the end of the match, «Aktobe» scored five points, but in the end, our team won a tremendous victory — 98:59.

Most productive:
Consequences: «Astana» continues to lead the standings, so far without defeat.

Upcoming match: The next game of the series with «Aktobe» will take place tomorrow, December 24, in Nur-Sultan at the arena of the cycle track «Saryarka». The match kicks off at 19:30 Nur-Sultan time. The online broadcast of the game will be available on the main page of our website.