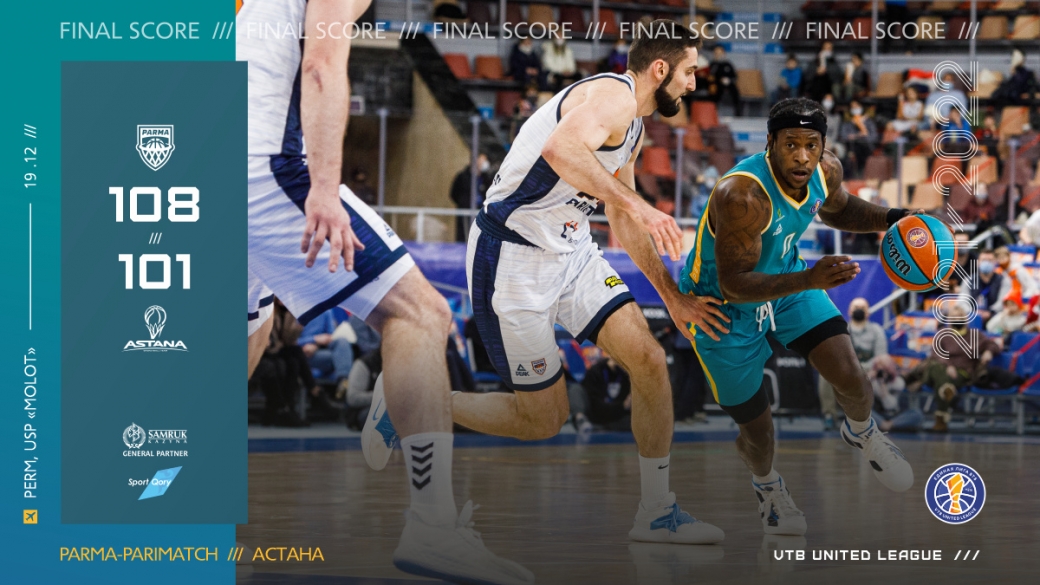 Basketball club «Astana» stayed on a visit to «PARMA-PARIMATCH» for three more overtimes, which became a new VTB United League record in extra playing time. A return to the playoff zone was at stake for our team in case of victory, but the hosts had a lot to lose too.

The hosts won the jumping ball and opened the scoring in the match. Jaylen Barford became the first player in «Astana» to score points in the game, thanks to which our team caught up with the rivals. After that, the yellow-turquoise team stalled and could not hit the hosts' basket for several minutes. The Permians went ahead, and their lead quickly became double-digit, and their spurt had to be stopped by Darko Russo — with a timeout. After a one-minute break, our team was doing much better: Skylar Spencer was twice accurate from the free-throw line; Anthony Hickey scored points from the field twice, Antonio Campbell scored once, and Burford was the first in our team to score a three-pointer. Next, Spencer equalized the score in the match, and thanks to another three-pointer from Barford, «Astana» took the lead. Having missed a spurt from our guys, opponents activated again, but it was not so easy to level the score. Campbell, Hickey, and Murzagaliev successfully implemented their attempts, but in the last second of the period, the hosts equalized the score — 24:24. In the second quarter, as in the first one, «PARMA» players took the lead. Darko Russo's wards could not earn the first points in this game segment for almost four minutes and again fell behind, this time by 8 points. Anthony Hickey interrupted the goalless pause, then our score was supported by Maxim Marchuk and again by Hickey, and after a dunk from Skylar Spencer, the score was again equal. It was impossible to bypass the rivals; the latter began to gain points again. «Astana» until the end of the first half was in the role of catch-up — Barford scored twice and Hickey once, but this was not enough to catch up with the rivals — 41:38. 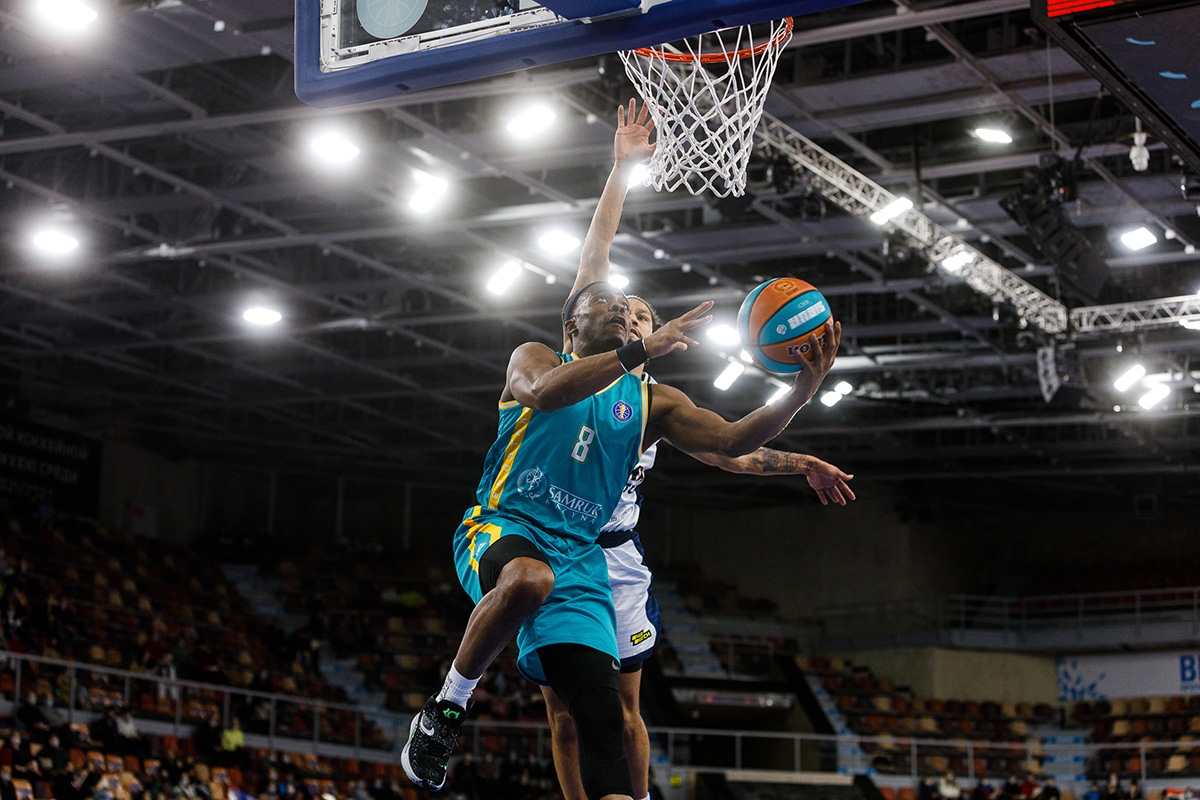 In the third quarter, the capital team continued the pursuit of the Permians, during which the distance changed from six to two points. In general, the return from the long break was not very fruitful — Skylar Spencer and Jaylen Barford brought 4 points. In the middle of the period, the hosts went into another gap and their advantage again reached a double-digit figure. Also, in the middle of the quarter, Darko Russo took another timeout, and over time it bore its fruits, «Astana» stopped the further breakthrough of «PARMA» and gradually began to reduce the gap. Anthony Hickey and Skylar Spencer chalked up two points each; Mark Tikhonenko was twice accurate from beyond the arc, Barford and Hickey distinguished themselves with precise shots from afar. All this was not enough to level the score in this period, but before the final game segment, our guys were losing only two points — 60:58. Anthony Hickey equalized the score at the start of the fourth quarter, and a little later,  Mark Tikhonenko scored another three-point shot. However, the hosts stubbornly did not let our team go ahead. Jaylen Barford narrowed the gap to one point, and in the middle of the quarter, «PARMA» again went into a slight advantage. Five minutes before the end, the Kazakhs were losing 7 points. Spencer was accurate in the pass, but the opponents regained 7 points of advantage, which they held for the next one and a half minutes. Barford scored only one free throw, followed by Campbell scoring two more points; Jaylen was again able to score just one point from the penalty line. After two points from Anthony Hickey, the difference was minimum, and only a minute remained until the end of regular time. The opponents were able to shoot the target twice from the penalty mark, but 20 seconds before the final buzzer, Jaylen Barford scored a three-pointer and equalized the score in the match. The opponents had time for one attack, but they did not realize it, and we ended up in for overtime — 76:76. 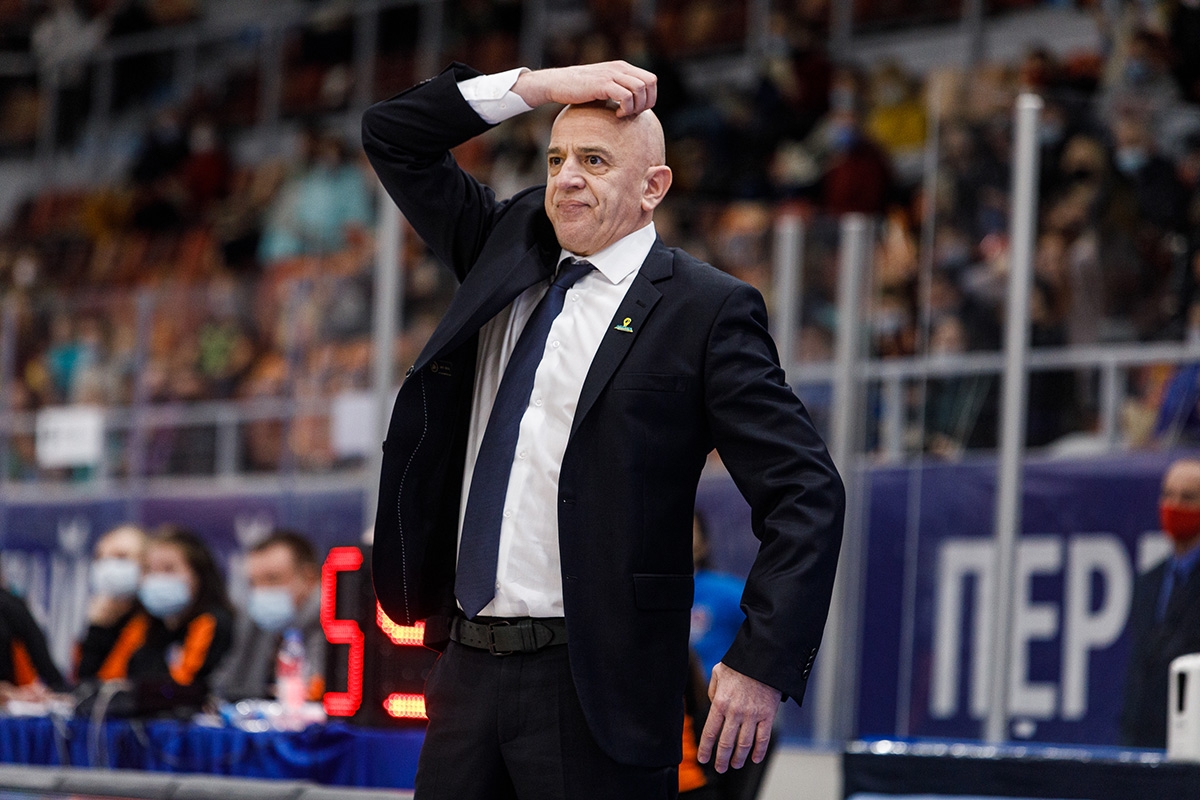 For «Astana,» this is the second overtime match in a row in the VTB United League. In the home match against «Yenisei,» luck turned away from our team. Overtime did not start so well for «Astana»; almost after two minutes, there was no single point to our team. Meanwhile, the hosts have already earned a 4-point lead. Skylar Spencer scored the first points for «Astana» in extra time, and Maxim Marchuk equalized the score a minute later. It was noticeable that the players were already tired; particular concerns were at the expense of Barford, who could hardly move around the court. The rivals scored a couple of points, but Jaylen returned the balance to the scoreboard; this time, he was twice accurate from the penalty line. In the remaining minute of the first overtime, the teams did not score more points, and the game successfully moved into the second overtime 82:82. By the way, Barford, who left the court at the end of the first overtime, did not come out at the start of the second, and Tamerlan Batyrgaliev tried to get him back in shape. The second overtime, as the beginning of the first one, remained with the hosts, who by 7 points. Anthony Hickey was accurate from beyond the arc, narrowing the gap slightly. Then Jaylen returned to the site, who moved on one pure will of power. Maxim Marchuk got the fifth foul and could no longer help his team. Jaylen again earned two points from the penalty line, but he went back to the bench after a while. The Permians were planning to finish everything in this overtime, and their advantage in a little over a minute before the end of the five minutes was 7 points. But our guys did not give up and continued the fight — Nikolay Bazhin scored a crucial three-pointer, followed by Anthony Hickey scored points from the game, Oleg Balashov scored two points with a foul. After realizing an additional free throw, he brought «Astana» one point forward. There were 8 seconds left, and the attack remained the rivals. After a timeout with its coaching staff, «PARMA» missed the mark. Oleg Balashov took the rebound in defense, and immediately a foul was made on him. There were 3 seconds left, Balashov scored both free throws, and it seemed this was a victory. But the hosts did not give up and scored a crazy ball from about the middle of the field, which hit the target and equalized the score — 97:97. Ahead was the third overtime, which became a new VTB League record. To say that the precise three-pointer in the last seconds was demoralizing is to say nothing. Our several key players could no longer help the team, and, in general, everyone was exhausted. The opponents were not full of strength either — they also gave a lot of energy to this match, but the end of the second overtime gave them an emotional boost. Unfortunately, it all worked against our team. Antonio Campbell earned two points, but the opponents had more confidence, and they went ahead. Anthony Hickey, at the last minute, was twice accurate from the penalty line and hit the line of one hundred points for «Astana,» but the victory, in the end, remained with «PARMA» — 108:101.

Most productive:
Head coach of «PARMA-PARIMATCH» — Kazis Maksvitis:
«We would not have brought the game to three overtimes if only we'd controlled it better. We were supposed to foul in the first overtime, but the opposing player scored a free throw from the perimeter. In the second overtime, we changed the defense, and Evgeny Voronov entered the game from the bench. There were many emotions and mental mistakes today. However, the main thing is that the basketball gods were on our side today, and in the end, we achieved victory.

Head coach deputy of «Astana» — Sirvidis Virginius:
«Today, we competed very well, even though our bench is much shorter than that of the Permians. But we made many mistakes in defense, and in the end, we failed to complete everything as planned. It was these simple mistakes that decided the outcome of the match.»

Consequences: «Astana» remains on the tenth line of the standings, and at the same time, it is further from the playoff zone even more.

Next match: Towards the end of the outgoing year, the capital team will have time to play two home series of the National League games against Aktobe. The first games with the red-and-white ones will take place on December 23 and 24, and after a day of rest, the teams will again converge on the floor on December 26 and 27. As part of the VTB United League, our guys will now play after the New Year holidays - on January 8, they will play an away game with the Krasnodar «Lokomotiv Kuban.» 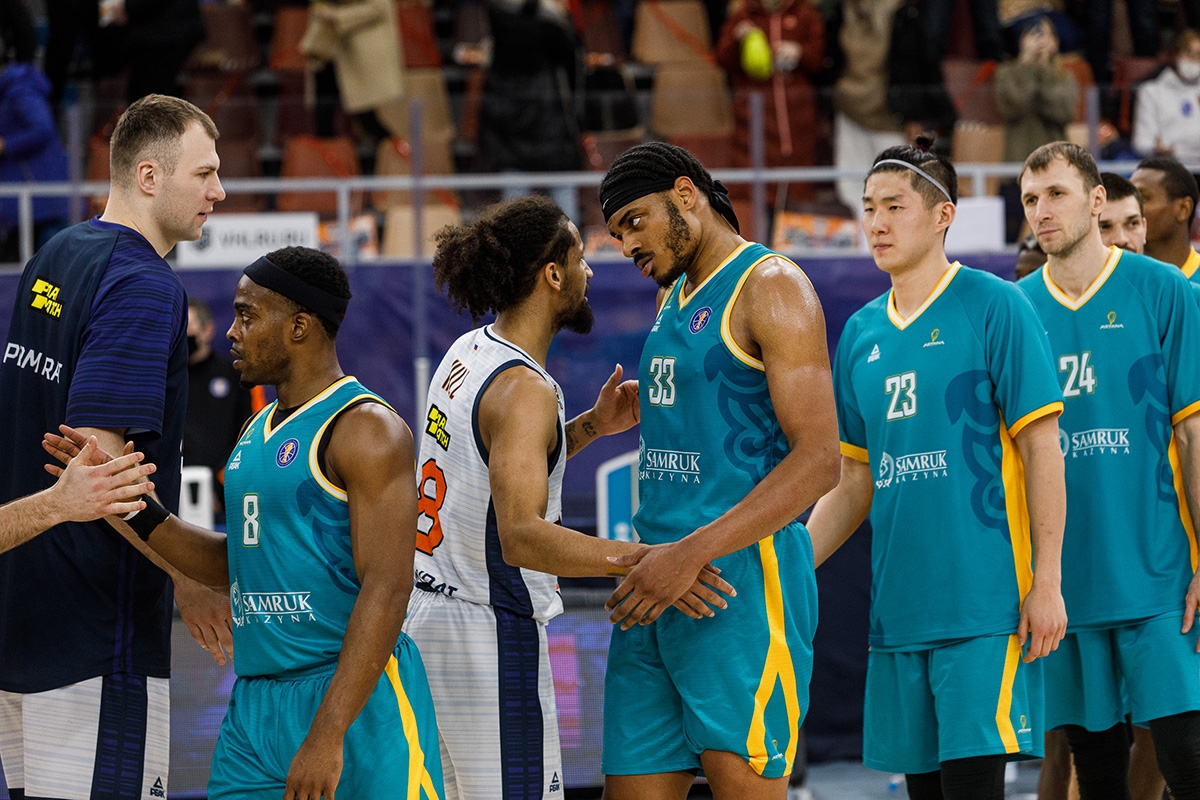