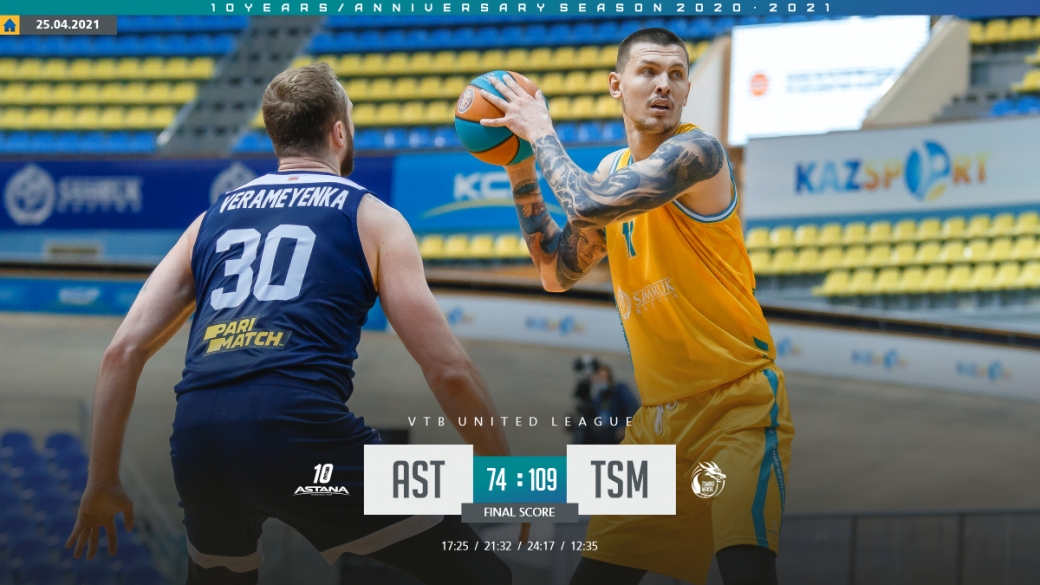 Towards the end of the VTB United League regular season, «Astana» lost in a home match to «Tsmoki-Minsk»

Basketball club «Astana» did not cope with rivals from Belarus in the last game of the VTB United League season, losing to the team «Tsmoki-Minsk» at home.

The jump ball went to our guests, who opened a scoring in this game. Looking ahead, it should be noted that the start of the match turned out to be extremely unsuccessful for “Astana” — a series of losses and missed shots became the reason for that. Meanwhile, our rivals used to the maximum the first minutes of the game and implemented almost all their attacks, all this resulted in a 0:11 spurt. Our team earned the first points from the penalty line — Nikolay Bazhin made one attempt, and Askar Maidekin a little later scored the first points from the game for our team. “Dragons” continued to dominate, and their advantage reached 16 points even before the equator of the first quarter. “Astana” finally managed to gather together and began to gradually recoup the gap. Nikolay Bazhin was twice accurate from the free throw line, and Ojars Silins opened his personal score with a three-point shot and was accurate three more times with free throws. Until the end of the quarter, Rustam Murzagaliev and Dmitry Gavrilov brought our team points. After 10 minutes of the game “Astana” was losing 8 points — 17:25. The second quarter began with points from Gavrilov, thanks to which the backlog of the hosts was reduced to 6 points. However, “Tsmoki-Minsk” continued to confidently score points, while our team did not play well in attack. Three points from Anton Ponomarev did not save our team from a lag of 18 points even before the middle of the period. Further, Nikolay Bazhin and Askar Maidekin distinguished themselves by their performance, but the guests nevertheless reached 20-point advantage. Until the end of the first half of the match, Ponomarev, Bazhin, Silins and Hill contributed to Astana's score, but the final gap after twenty minutes of the game was not consoling — 38:57. 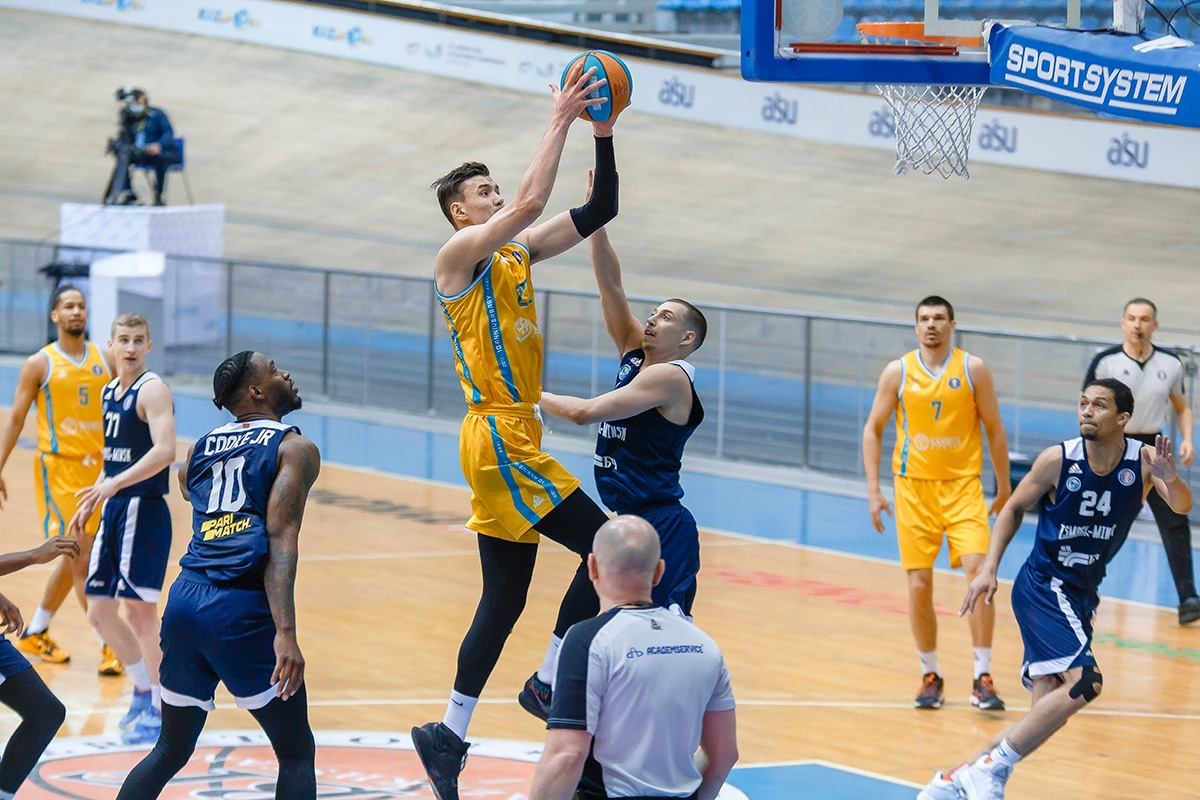 After a long break, things for our team began to level out a little and points from Jeremiah Hill and Dmitry Gavrilov reduced our gap by more than a third. In the game of Emil Rajkovic's squad confidence began to appear, which was so lacking in the first half. In the middle of the third period Jeremiah Hill became Astana's daring force, and Ojars Silins supported him with his points. Then Ruslan Aitkali reduced the backlog of the capital's team to 8 points. Nevertheless, our rivals were able to cope with the pressure of the Kazakh team and stopped a further advancement. Moreover, the guests again increased their lead to double digits. Askar Maidekin and Jeremiah Hill replenished the score of “Astana” with their points, but before the final quarter the backlog of our team was 12 points — 62:74, which was not yet such a critical result. But the fourth quarter itself became a real disaster for «Astana». Already from the start of the final ten minutes, our guys had serious difficulties with gaining points, while the opponent was coping with this task quite successfully. Maxim Marchuk opened the scoring for “Astana” in this period, but only in the fourth minute and with a gap of more than 20 points. “Dragons” continued to dominate and five minutes before the end won more than 30 points, and were also able to overcome the milestone of 100 points. Points at the end of the game were earned by Anton Ponomarev and Jeremiah Hill, and Robert Pan set the final score in this match, which was very unsatisfactory for our team — 74: 109.

Consequences: This was the last game of the VTB United League season, and «Astana» ended up taking only 12th place in the regular season standings.

Most productive:
Head coach of «Astana» — Emil Rajkovic:
''I would like to congratulate «Tsmoki-Minsk» on the victory. They were better today and played with more energy. However, we were unable to keep the pace of the game and physically were not in optimal shape. It's unpleasant to lose in the last game in the VTB League as the head coach of ''Astana''. This season was difficult, but the best thing is that the local basketball players have significantly improved their level of play. Thank you very much and wish you all the best!»

Head coach of «Tsmoki-Minsk» Rostislav Vergun:
«A difficult season for both teams is over. We represent what our opponent had to go through. Our season was also extremely difficult, it was not possible to realize what we had in mind. Today we wanted more of this victory, and I am very glad that the guys managed to materialize their energy into effective basketball. In terms of efficiency, this match was the best of the season. I wish good luck to Emil Rajkovic and his team. Hope we to meet next season.»

Next match: At this, Astana's performance in the VTB United League season came to an end and now our team will have to defend the championship title of the National League in the playoff series, which will start from the 1/2 finals against the Aktau «Kaspiy». The first three matches of the series up to three wins are scheduled for April 27, 28 and 30 in Nur-Sultan.