«Astana» failed to compete against CSKA in Moscow

The away game of the basketball club «Astana» with the Moscow CSKA in the VTB United League ended with the victory of the hosts.

The jump ball was won by the hosts and immediately opened the scoring in a quick attack, laying the foundation for their lead. The first points for “Astana” were earned by Ruslan Aitkali, who scored a three-pointer. Then CSKA were pulling away fast, the army team scored 10 points, in just over two and a half minutes, and their advantage was 7 points. Aitkali was again accurate from beyond the arc, but the hosts continued to impose their game. Our team began to gradually resist and demonstrate a more confident game, while the gap between the army did not increase, but remained in the range of 5-8 points. Jeremiah Hill, Anton Ponomarev and Eric Buckner scored points for the first game segment. Michael Thompson scored his first points in the game from beyond the arc and narrowed the gap to two points, and Hill had a chance to level the score from the free-trhrow line for the first time in the match, but he made one mistake and in the end the team was separated by only one point. CSKA implemented their attack and “Astana” had time to retaliate, but the three-pointer missed the target, but Hill stole a ball by the skin of his teeth and made a pass to Askar Maidekin under the basket, who established the final score of the first quarter — 23:22. “Astana” was not able to catch up with the rivals, who were actively gaining points at the start of the second quarter. Nikolay Bazhin scored twice against «Astana», but these were the only points of our team at the start of the period, while CSKA, meanwhile, made it into a double-digit lead. Ojars Silins and Erik Buckner reduced the gap to only six points, but after that our team allowed the opponents to earn 12 unanswered points. Only two minutes before the end of the first half and with a gap of 18 points, Michael Thompson interrupted a goalless pause, but before the big break, the hosts got to 20-point lead. Robert Pan implemented a three-pointer, and as a result, “Astana” retired, 19 points behind — 58:39. 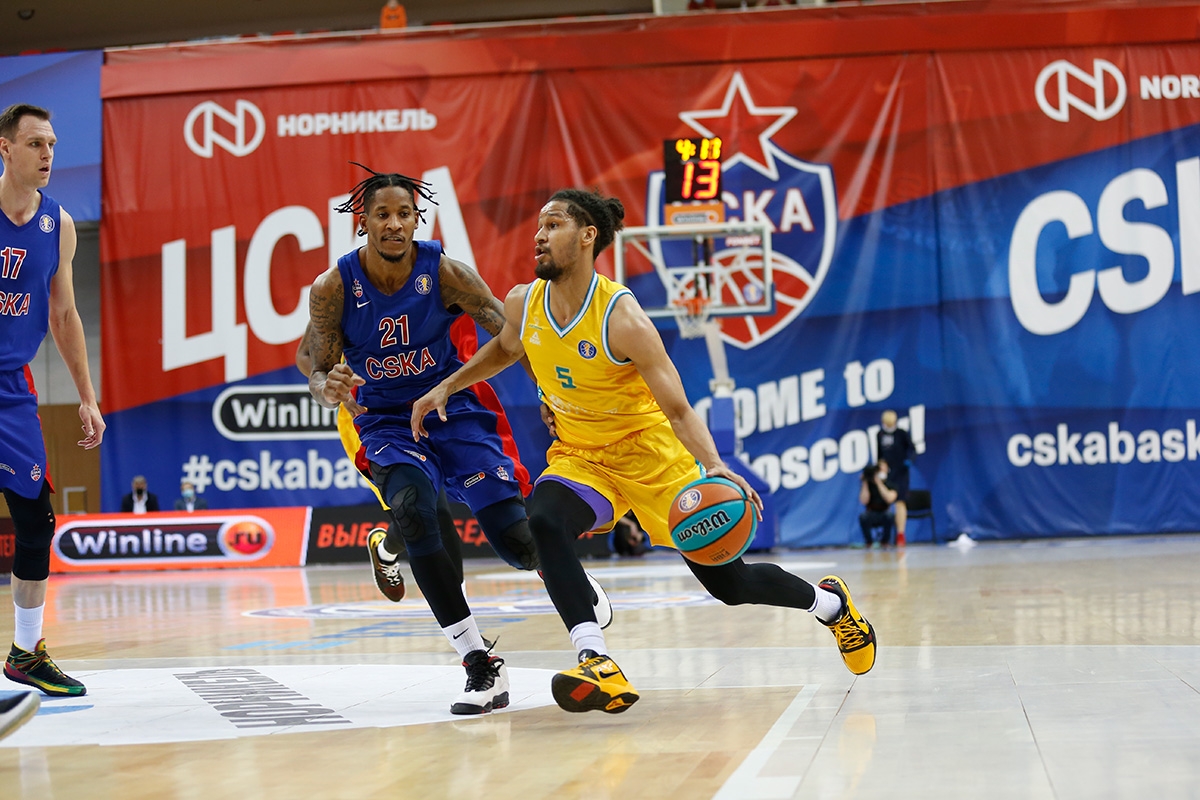 The second period was very unfortunate for our guys, but there were still 20 minutes left to play. Jeremiah Hill opened the score in the second half and was supported by Eric Buckner. However, CSKA responded to this attack, and their advantage exceeded twenty and reached 25 points. Once again, Michael Thompson interrupted the scoring lull from “Astana”. Nikolay Bazhin was twice accurate from under the ring, and after three points from Thompson, the difference again became less than twenty points. The final score in the period was settled after an effective attack from Jeremiah Hill. The period itself ended in a draw, and 19 points of the Moscow team's advantage persisted. Ojars Silins was active at the beginning of the fourth quarter, earning 7 points in the first five minutes, Michael Thompson also scored an accurate three-pointer, but this did not greatly affect the gap, which still exceeded 20 points five minutes before the end of the match. Ruslan Aitkali converted a three, and Jeremiah Hill and Erik Buckner organized an alley-up for the highlight match, but this could not save the game. Moreover, CSKA made another leap and approached +30 on the scoreboard. In the last minute and a half, “Astana” was more active, Michael Thompson, Jeremiah Hill and Nikolay Bazhin were gaining points, thanks to which the difference in the score was slightly reduced. CSKA was a step away from a hundred for some time and they managed to achieve a three-digit figure at the very end of the game, thereby becoming the final score — 100: 77.

Consequences: CSKA strengthened its position on the third line, and “Astana” remained on the 12th position.

Most productive:
Next match: Less than a week later, on Saturday, April 17, our guys will play their home match in the VTB United League against Kazan UNICS on the ground floor.