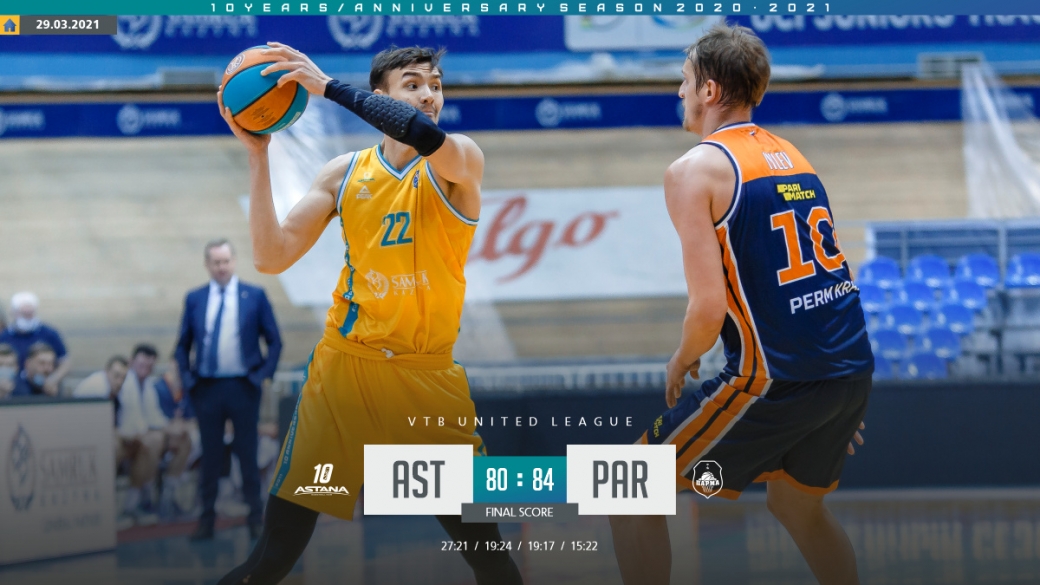 «Astana» could not beat «Parma» at home

This match was important for both teams and was expected to be challenging. Basketball club “Astana” and “PARMA” played a very equal and tough game, but the defense of the rivals, especially in the final quarter, brought victory to a rival team.

The jump ball was won by the guests, but they did not score points in the first attack, as well as our attack was fruitless as well. As a result, the guests opened the score by organizing an effective shot from behind the arc. Michael Thompson responded with his accurate three-pointers, but the Permians again took the lead after another accurate long-range throw. Rustam Murzagaliev was the first of our players to score from a short distance, and Astana's spurt was supported by Michael Thompson with another three, while the capital team took the lead for the first time. The parade of long-range hits continued, but this time our rivals were accurate. The answer came again from Murzagaliev and Thompson, who repeated their precise throws and again brought the Kazakh team forward, and after a three-pointer from Anton Ponomarev, Astana's advantage reached 6 points. “PARMA” tried to catch up, but long-range artillery in the person of Thompson and Hill continued to hit right on target, and at the last minute Nikolay Bazhin made two precise throws from under the ring — 27:21. The second quarter was frankly unsuccessful, when our team spent almost four minutes in fruitless possessions and missed the guests' spurt — 0: 8, thanks to which the Permians not only caught up but also bypassed “Astana”. Michael Thompson opened the score for “Astana” in the second period and leveled the score, and he further brought our team forward. “PARMA” continued to impose the struggle, the rivals managed to come out ahead again, but not for long. The points of Jeremiah Hill and Eric Buckner returned the leadership to “Astana”, and then they kept the advantages in the hands of the Kazakh team. But “PARMA” managed to pull away again, and until the end of the first half the teams replaced each other several times as the leader. As part of our squad, Michael Thompson and Eric Buckner were useful, and Thompson put an end to the first half, which was held with an equal and persistent struggle, and the score was proof of this — 46:45. 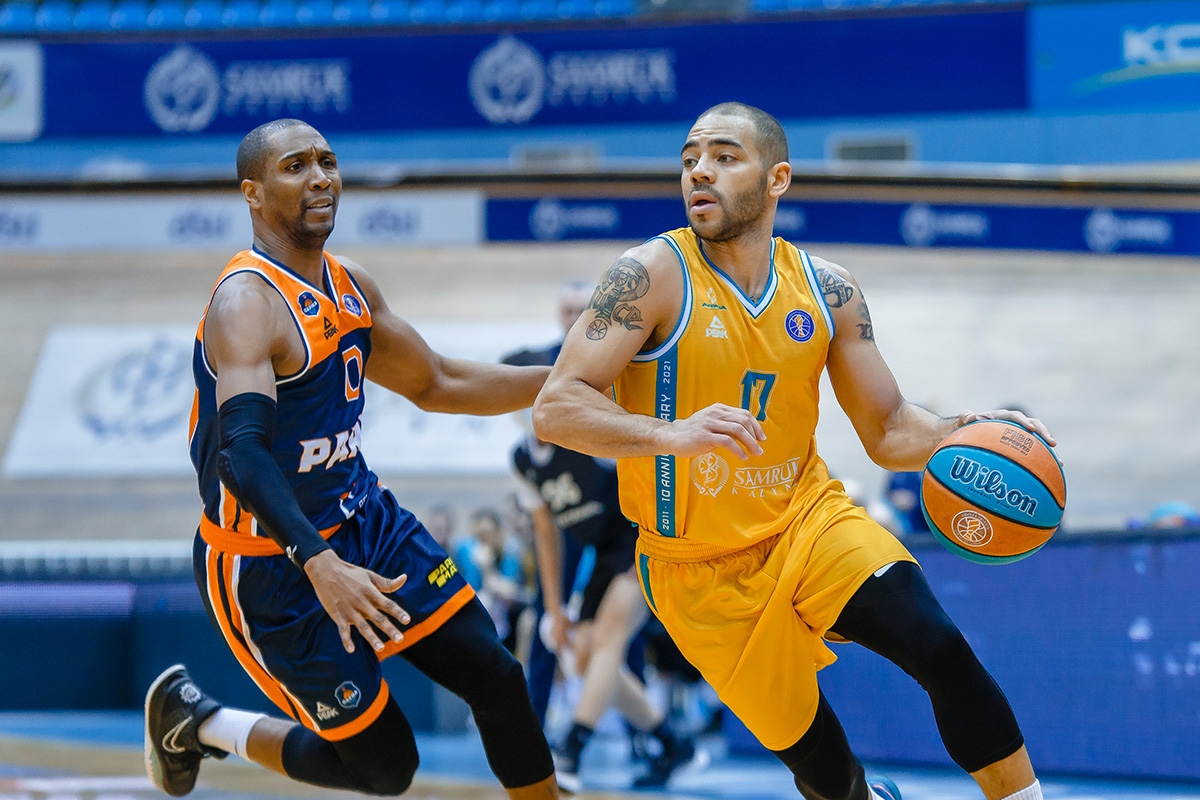 After the changeover, the hosts managed to make a small breakthrough, based on the points scored by Murzagaliev and Thompson. The advantage of «Astana» reached 8 points, but they failed to reach the double-digit figure. The guests did not allow our team to leave a significant gap and did not let the intrigue fade away. So the whole third quarter passed, and the difference was kept in the region of 4-7 points. “PARMA” put pressure on the entire court and was able to block Michael Thompson, who by that time had already scored 26 points. Eric Buckner and Anton Ponomarev demonstrated excellent play, and Nikolay Bazhin was also very active. The last effective attack in the third quarter remained with the Permians, who, having realized three points, and before the final quarter were losing only 3 points — 65:62. The whole game was played in a very equal and tough struggle, and the last period promised to be tense. From the start, both teams switched tough defense, and “PARMA” imposed such pressure that it was very difficult for our players to move the ball over the centerline. The defense was effective and for the first time 4 minutes, the teams practically did not score from the game. During this time, our players were unable to score effective points and allowed their opponents to score from the penalty line, which brought them forward. The guests also converted a three-point shot before Eric Buckner opened the ring of the rivals in this period. Also, in the first five minutes of the period, only Nikolay Bazhin scored two points from the Kazakh squad. Five minutes before the end, “Astana” was losing only 3 points and anything could have happened in this match, but “PARMA” continued playing tough, and most importantly, to play effectively in defense. This resulted in a -9 lag for our team just over a couple of minutes before the final buzzer. The penultimate minutes went well — Nikolay Bazhin earned 5 points and a couple more from Hill, after which the difference was only 5 points, and the intrigue was quite sharp. The teams ended the match in a tactical struggle with a lot of timeouts. “Astana” had chances to at least transfer the match into overtime, but “PARMA” defense worked out for 100% and did not allow our shooters to make simple shots from beyond the arc, which we really needed. As a result, “Astana” lost this match with the result — 80:84.

Consequences: “PARMA” after this victory returned to the playoff zone, moving “Avtodor” from the eighth line. But with each defeat “Astana” has fewer chances to get into the top eight, and the nearest schedule does not contribute to this in any way.

Most productive:
Head coach of «Astana» — Emil Rajkovic:
«At the end of the game, «PARMA» used pressure a lot and we could not get easy points under the basket. As for defense, we should have played better on rebounds, especially at key moments of the game. On the other hand, we made it possible for all players to play. Nikolay Bazhin spent a long time on the court, Anton Ponomarev and Askar Maidekin got their chance as well. As I said earlier, we are using these matches to give more playing time to local players. This experience will come in handy the next season.»

Head coach of «Parma» - Kazis Maksvitis:
«I congratulate my team on the victory, «Astana» fought with dignity. Our team lacked freshness after a long journey, and this was evident in the first half of the game. After a long break, we acted a little more aggressively, fought to the end, and deserved an important victory.»

Next match: Next, the team of Emil Rajkovic will have to prepare for the away game with «Lokomotiv Kuban» within the framework of the VTB United League, which will take place on Saturday 3 April.