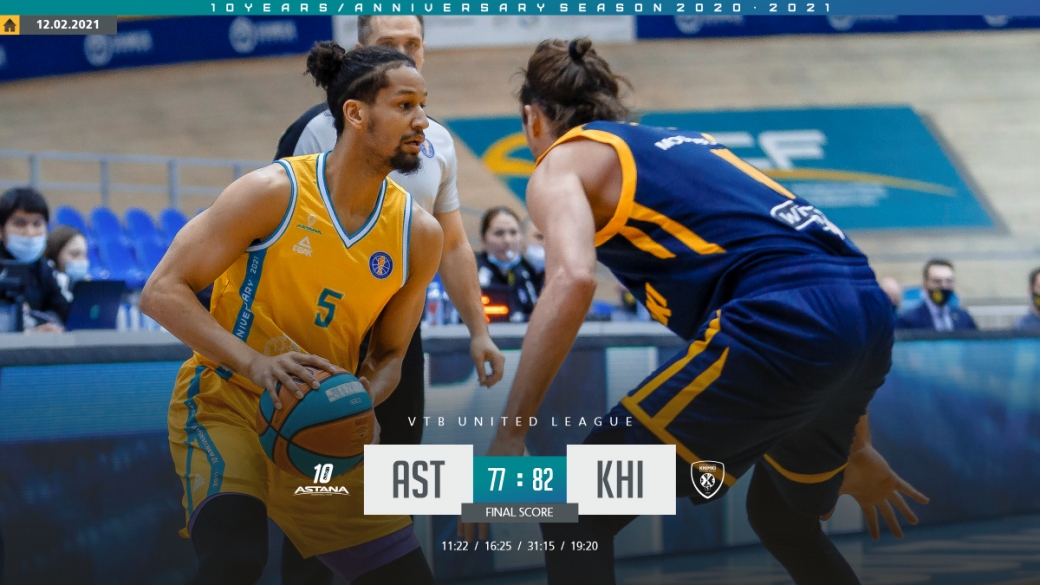 The home match of the basketball club «Astana» against «Khimki» turned out to be really hot! Yielding during the first half of the game, our guys made a confident comeback in the second and were one step away from winning the intriguing ending.

The score was opened by Martins Meyers, but his points were the only ones at the start of the game. Then there was a goalless pause for almost three minutes on the court, during which time the teams made quite a few mistakes, both when shooting and in the field. The Khimki players interrupted this pause by leveling the score and a competition for leadership began on the court. Thanks to the efforts of Ojars Silins and Adonis Tomas, our team came forward a couple of times but eventually took on the role of the one catching up. After the next points from Silins “Khimki” made a good breakthrough and “Astana” was losing almost 10 points for a couple of minutes before the end of the quarter. Devin Marble scored a three-pointer, but it turned out to be the last points in the quarter for the yellow-turquoise, and the guests got their way and left for the break with a double-digit lead — 11:22. At the start of the second quarter, the Moscow Region team kept control in their hands, gradually increasing the gap, but then Jeremiah Hill and Michael Thompson scored three three-pointers in a row, reducing the gap to 8 points. After that, the implementation of the shots of our team fell again, and by the end of the quarter, the score of the Kazakhstan squad was replenished with only a few precise free throws, and the advantage of Khimki exceeded 20 points. Only at the very end of the first half of the game, Marble scored from the paint, and the first twenty minutes ended with the score — 27:47, not in our favor. Again, it can be noted not the best implementation of the shots, a rather large number of losses, especially in the first quarter. 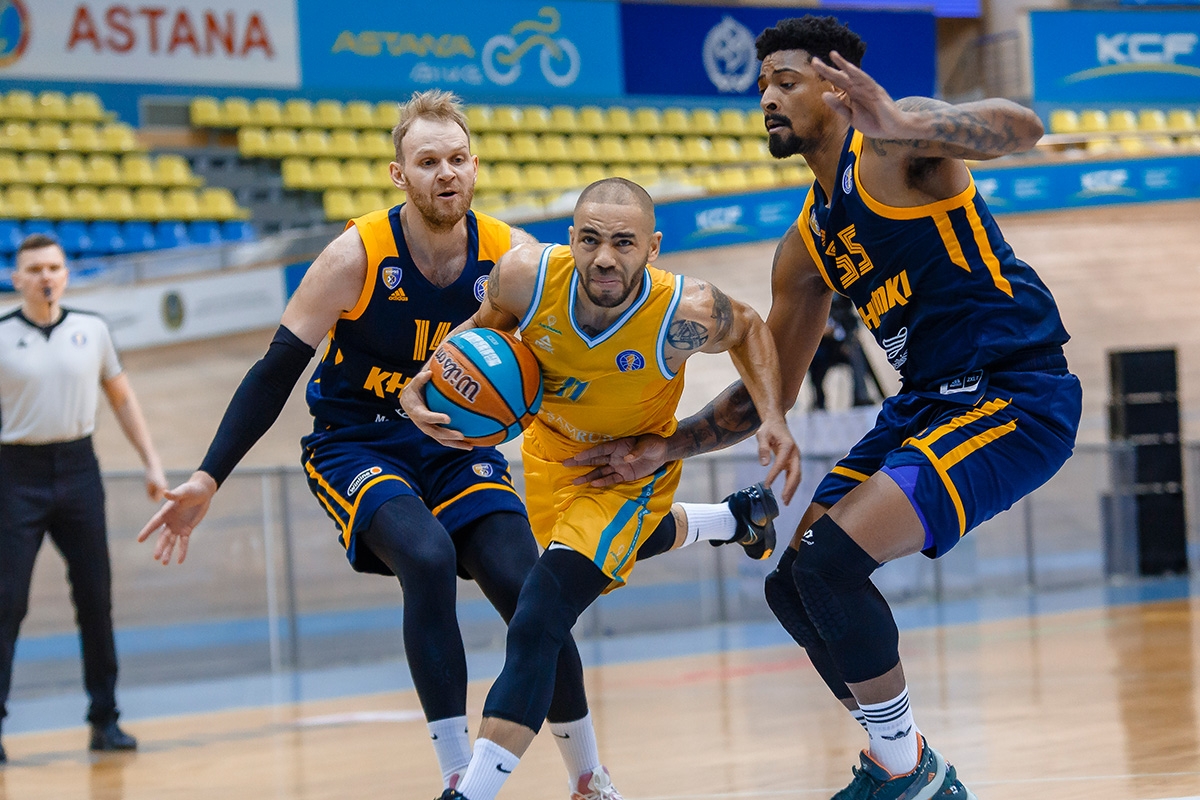 The big break did good for our team and no one expected what began to happen in the third quarter. Emil Rajkovic's team rushed forward, and it all started with a steal from Michael Thompson at the starting jump ball and a lightning effective attack of the opponents' glass. In the next attack, it was Ojars Silins who made the steal and effectively completed the fast lead with a dunk. Meyers made a block-shot and dispersed another quick attack, which ended with a foul on Adonis Thomas, but with only one free throw. Our team defended well and the guests did not have so many offensive opportunities, while “Astana”, meanwhile, stubbornly moved forward. Silins implemented another long-range shot, and in the next attack, Jeremiah Hill followed his example. The gap was rapidly reduced from 20 points to 9 points. The time-out of rivals did not prevent the Kazakhstani team and our guys continued their comeback on the roll. Thomas and Hill scored three-pointers each, and then Meyers hammered in an impressive dunk. It took only five minutes of the quarter, and the difference was reduced to a minimum, only after that the guests were able to score the first points in the quarter. Then the game leveled off a little and the opponent began to respond to our attacks with their effective actions, but our long-range artillery continued to delight — Silins was once again accurate, and Thompson evened the score in the match. Nevertheless, “Khimki” could pull together and immediately regained the lead, and remained in this role until the end of the quarter. Hill showed an excellent game and did not allow his rivals to make another gap, successfully completing the last two attacks of “Astana” — 58:62. Unfortunately, courage left our team in the fourth quarter, however, the guests were also not very productive, but out of 9 points from both teams in the first half of the quarter they chalked up 7, only Meyers was effective closer to the middle of the period. Thus, the guests won 9 points five minutes before the end of the match. The advantage of our rivals reached two-digit numbers, but thanks to the points of Thompson, Meyers, Hill and Silins, it mostly stayed in the region of 5-7 points. It was very hot on the court because two minutes before the end “Khimki” were leading by 5 points, Jeremiah quickly brought the difference to three. A series of mistakes on both sides did not change the score on the scoreboard and before the attack of our team, Emil Rajkovic took a time-out, when there was just over half a minute before the final buzzer. For this attack, our players were able to make two three-pointers and if they had reached the goal, then the score would have been equal, but alas, this did not happen. After the rebound of the opponent, our team had to make a tactical foul and both free throws were scored. 13 seconds remained and -5 on the scoreboard. Another time-out followed, after which Silins was accurate from beyond the arc — minus 2 and another tactical foul, hoping for at least one miss and 8 seconds to attack. The leader of “Khimki” Aleksey Shved, it was he who performed free throws, scored the first, but missed on the second attempt, after which the rebound was not on our side and after the controversial ball remained for “Khimki”, who were able to spend precious seconds last to score — 77:82.

Consequences: “Khimki” remained on the seventh line, having improved its percentage of victories, and “Astana” again went down to the 11th line, letting «Yenisey» ahead according to the results.

Most productive:
Head coach of «Astana» — Emil Rajkovic:
- Congratulations to the «Khimki» on the victory, they were better than us in the first half, but in the second we improved. However, this was not enough for our victory. I'm disappointed that we didn't win. If we played in the first half the same way as in the second, then we could certainly count on winning the game.

Acting head coach of «Khimki» — Andrey Maltsev:
- We have taken the right course and are currently on a good road. We had a slightly unsuccessful match with «Lokomotiv», which we lost in the end, and now in the first half against «Astana» we showed the basketball we are striving for. We conceded only 27 points. The second point: I really liked the fact that in the end, we found seven people who helped us win this match. Maybe they shortened the rotation, but this is exactly the situation in which we can find ourselves in any subsequent game, not only in the VTB League but also in the Euroleague. I am very glad that the guys withstand a rather difficult work schedule, and it is yielding results. We will continue to work in order to play the whole match in the same way as the first half against «Astana.


Next match: «Astana» fans will now be able to support their favorite team again only in spring — on March 1, Estonian «Kalev» will arrive in Nur-Sultan, and until that time our guys in the National Team will have to defend the honor of Kazakhstan in the final matches of the Cup Qualification Asia 2021.