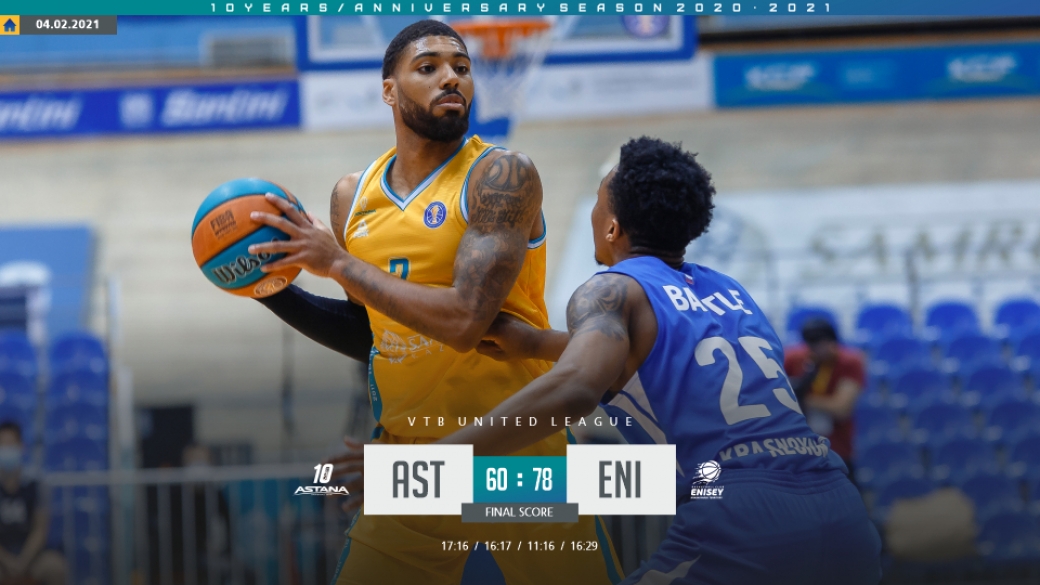 The home match of «Astana» against the Krasnoyarsk «Yenisey» began with the confident leadership of our team, but in the second half of the game, the opponents managed to seize the initiative and gain the second victory of the season.

The start of the match for our team turned out to be extremely ineffective, and in five minutes of the match, our guys did not score a single point. Krasnoyarsk team also could not boast of serious results but managed to score 7 points. Michael Thompson brought the first points to «Astana», who realized a three-point shot. In the next attack of our team, Jeremiah Hill distinguished himself with a long-distance shot, after which our gap was reduced to a minimum. However, the guests' response was not long in coming, and a minute later «Yenisey» was already in the lead by 6 points. “Enisey” kept the lead and its advantage was 7 points less than two minutes before the end of the first quarter. But this spurt was quickly parried by Nikolay Bazhin and Michael Thompson, as a result of which the difference in the score was again reduced to one point. Towards the end of the starting segment, Devin Marble brought “Astana” forward — 17:16. It should be noted that 15 points in the first period were scored from a long distance, and out of a negative 7 losses in ten minutes, although on average this season in the VTB United League for a match “Astana” is gaining only 12. The second quarter began for our team not quite well. Except for the precise points from the free-throw performed by Dmitry Gavrilov and another successful pass from Marble, our team scored nothing in the first half. During this time, “Yenisey” not only caught up with our team but also pulled away. When the advantage of our opponents became double-digit, Emil Rajkovic had to take a time-out. After a tactical pause, the matter got off the ground. Jeremiah Hill first made a hoop shot and then successfully demonstrated his sniper skills. Martins Meyers scored his first points in the match and reduced the gap to 4 points. Krasnoyarsk tried to keep the lead, but first Thompson converted another three, and in the final attack in the quarter, Adonis Thomas made an offensive rebound and immediately sent the ball into the ring, levelling the score — 33:33. 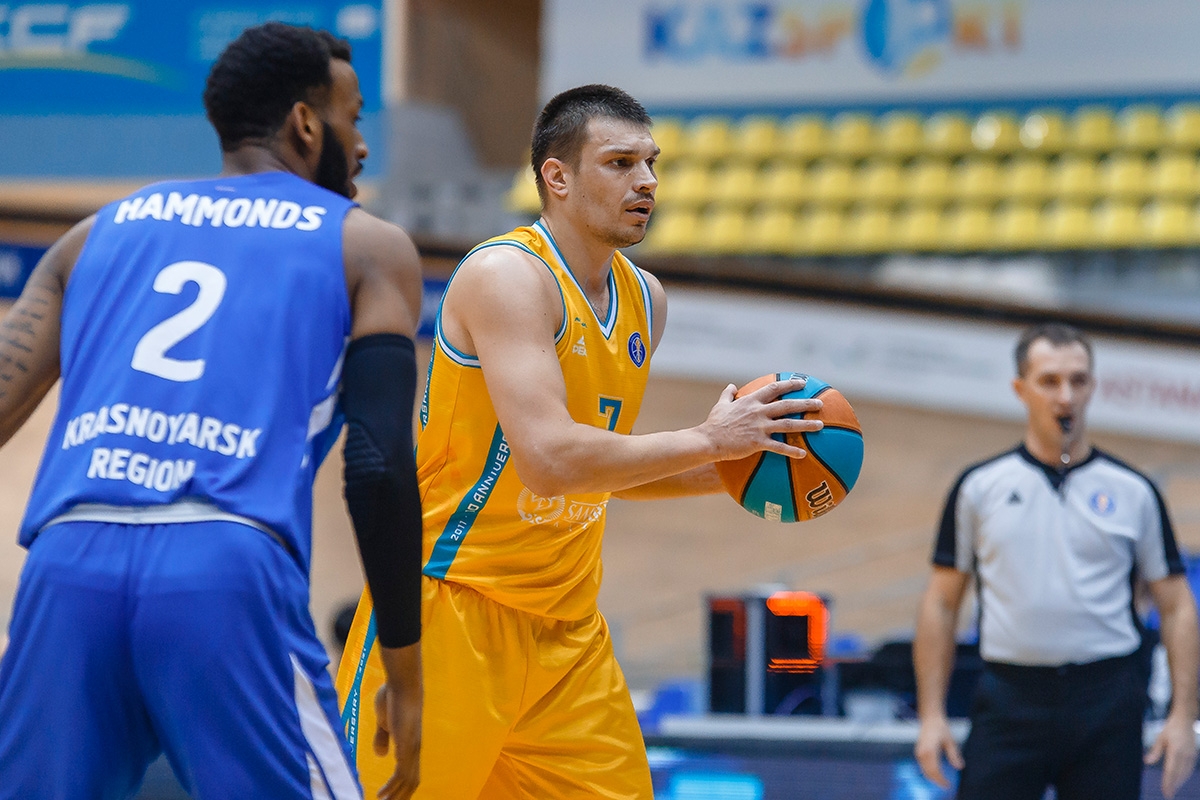 Problems with scoring haunted our team in the third quarter, when from the start the capital's basketball players missed a spurt of rivals — 0: 7. Only closer to the middle of the third period, Michael Thompson earned the first points for “Astana” in the quarter and started the return attack spurt of our team, which was supported by Adonis Thomas and Nikolay Bazhin. Dmitry Gavrilov evened the score, and Nikolai Bazhin, in a quick breakaway with an effective dunk, brought the hosts ahead. The next effective attack from our guys was enough to make the rivals' coaching staff nervous and take a minute pause to interrupt Astana's spurt, which stopped at 11: 0. The coach of the opponents managed to bring down the courage of «Astana» because after this time-out our team could not score a single point until the end of the third period, more than two and a half minutes. “Enisey” took advantage of this and not only made up for a lost time but also stepped forward, completing the third period with a 5 point advantage — 44:49. At the beginning of the final quarter, it was still too early to predict the outcome of this game, because the 5 point difference meant nothing. Nikolay Bazhin opened the scoring in the period, reducing the gap to three points, but then the response followed from the opponents, who earned points in two attacks in a row, with three in each. The teams exchanged a couple of effective attacks, and then “Enisey” for the second time in the match reached a double-digit advantage. This was the turning point in the game. In the last five minutes, the game at “Astana” completely went wrong, and “Yenisey”, meanwhile, found its own rhythm. The Kazakh team missed another spurt of the rivals and with every minute the chances of returning to the fight for victory were waning. A minute before the end of the game, “Astana” was losing more than twenty points, and the outcome of the game was already predetermined. A bright moment of the end of the match was Nikolay Bazhin's impressive dunk in a fast break, and Devin Marble scored the last points in the game, but this did not save our team from a painful defeat — 60:78.

Consequences: The teams exchanged positions in the standings: “Enisey” moved up to the tenth place, and “Astana” went down to eleventh, although they are separated only by the results of personal games.

Most productive:
Head coach of «Astana» — Emil Rajkovic:
- Congratulations to «Enisey», he was stronger today. We have a lot of problems, including because of the absence of Ojars Silins. He is our only player in the fourth position. There were problems under the ring, we could not cope with the front line of «Yenisey». I think this is the main reason why the opponent dominated in the second half of the game.

Head coach of «Eisey» — Drazen Anzulovic:
- Congratulations to my players, this was a good team game. In the first half, we controlled the game, but lost our advantage and gave the opponent a return to the game. From the third quarter, we have had the game under control. I am very happy with the way my players performed today. Of course, this is a very big victory for us.

Next match: The first weekend of February, on the 6th and 7th, our guys will play in Aktobe, where they will twice meet with the local team of the same name in the National League, after which they will have to prepare for a serious home game