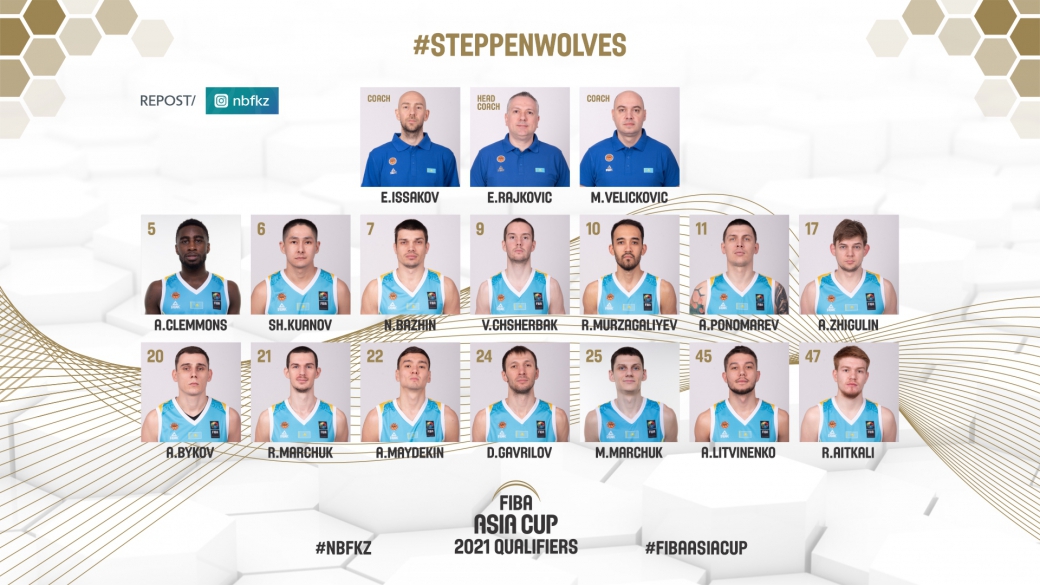 Exactly one month later, on February 18, the outcome of the Qualification for the Asian Cup in Basketball 2021 starts and today the coaching staff of the National Basketball Team of Kazakhstan has already decided on the list of players who will have to compete for a ticket to the continental championship.

By tradition, we will begin our acquaintance with the Steppenwolf roster by introducing the coaching staff, which in November 2019 was headed by the Macedonian specialist Emil Rajkovic, the head coach of the «Astana» Presidential Basketball Club for the last three seasons. As a coach, Emil Rajkovic managed to prove himself well, becoming the best coach of the VTB United League of the 2918/2019 season, and the team spent the best season in the League in the history under his leadership of the club, and also once again won the title of champions of Kazakhstan and became the winner of the Cup of Kazakhstan. Emil Rajkovic will be assisted by his Astana colleagues — Serbian specialist Marko Velickovic and national basketball veteran Yevgeny Isakov, who in the summer 2020 moved to the coaching staff of the capital's team from the Aktau «Kaspiy». The doctor and massage therapist of «Astana» — Damir Abildin and Tamerlan Batyrgaliev are still responsible for the health of the main team of the country. The team manager is Rustem Mukanov, also from the capital's team structure.

In regards to the roster of «Steppenwolfs» itself, 9 players of the capital «Astana» were summoned to the National team. The team captain is Rustam Murzagaliev, who has been a permanent member of the National team in recent years. He will be accompanied by teammates — Dmitry Gavrilov, Maxim Marchuk, Nikolay Bazhin, Askar Maidekin, Vadim Shcherbak, Andrey Litvinenko and Ruslan Aitkali, as well as Anton Ponomarev, who returned to «Astana» from Tobol, who has defended the yellow-turquoise colors for many seasons before this. Also, Alexander Zhigulin, who has played for «Astana» since 2015, will play for the National Team. In the offseason, Alexander moved to the Russian club «Ufimets», and in January he signed up with «Samara». Like a year ago, the old-timers of the National team — Anton Bykov and Shaim Kuanov are from the Kostanay “Tobol”, and Roman Marchuk from “Kaspiy”. In addition, Anthony Clemmons, who played for «Astana» in the 2017/2018 and 2018/2019 seasons and received Kazakhstani citizenship, will again help the Steppenwolves get a ticket to the 2021 Asian Cup. This season Anthony is playing for the basketball club «Igkokea» from Bosnia and Herzegovina.

The delegation of the National Team in the away matches will be headed by the general manager of «Astana» — Olympic champion Valery Alekseevich Tikhonenko.

According to the approved schedule, due to the re-scheduling of the 2nd game window between the group «F» teams, which was supposed to take place in November 2020 in Jordan, but was canceled due to the spread of the COVID-19 pandemic, at the end February, our team will play four away matches, which will be held in the capital of Bahrain — the city of Manama: On February 21 and 24, 2020, the Men's National Basketball Team of Kazakhstan played the first two qualifying matches for the Asian Cup 2021, which were held in Nur-Sultan. In the first game, the Steppenwolves snatched victory from their rivals from Palestine — 79:76, and the meeting against the Jordanian National Team ended in an unfortunate defeat — 68:71.

The National Basketball Federation of Kazakhstan expresses gratitude to the National Olympic Committee and the Ministry of Culture and Sports for their support and assistance in preparing the team for participation in the tournament. The general sponsor of the National Basketball Team of Kazakhstan is «M-Sport» LLP, the sponsor is «Capital City Center» LLP, the technical partner — JSC «Transtelecom», the partner is the «Easy Bounce» basketball store.