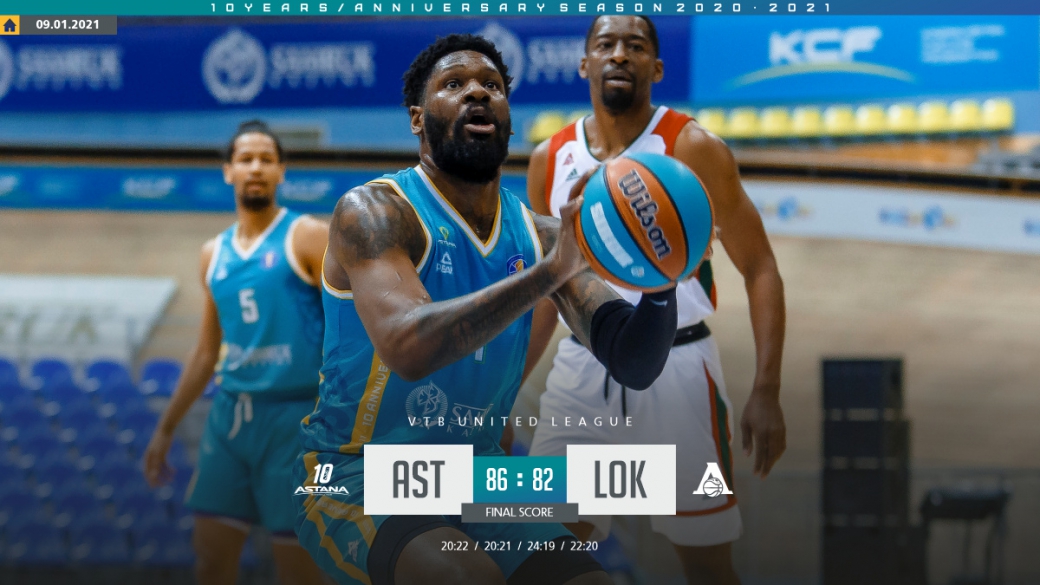 We congratulate all the fans of the basketball club «Astana» with a great start to the new year! In the home match of the VTB United League against «Lokomotiv» Krasnodar, our guys demonstrated an excellent fight and snatched an important victory from strong rivals in a breath-taking ending.

Our rivals won the jump-ball and in the first rather prolonged attack, the Kuban team opened the score in the match. Our guys missed another effective attack of the guests before they scored for the first time in this game, and Michael Thompson distinguished himself by realizing two of his three free throws. Adonis Thomas cut the gap to one point with his first field goal, but our guests still remained in the lead. “Astana” confidently kept the situation under control and did not allow “Loko” to go into a significant lead. At the beginning of the match, only Thomas and Thompson scored points for the Kazakh team, but they could not dramatically affect the difference in the score, which was kept in the range of 5-6 points. Ojars Silins reduced the gap to three points with an accurate three-pointer, and Thompson evened the score with another accurate long-range throw for the first time in the match. Then Michael realized one more long-distance attempt and brought “Astana” forward. Unfortunately, from that moment on, our guys could not realize a single attack until the end of the quarter, and the opponent scored five more points and regained the lead — 20:22. But it is worth noting that today our long-range shots were on fire, and this called for nothing but rejoice. At the start of the second quarter, Martins Meyers and Jeremiah Hill scored their first points in the game, thanks to which our team again took the lead. But this our guests naturally did not like, and they again seized the lead. Two points from Dmitry Gavrilov balanced the score again, and our captain — Rustam Murzagaliev, who missed his first long-range attempt, rehabilitated himself in the same attack and brought “Astana” forward once again. This exchanges of shots went on, and the teams took turns replacing the leader. First Askar Maidekin, and then Michael Thompson equalized the score until the end of the first half of the match, but the last effective attack remained with «Lokomotiv» — 40:43.

After a long break, the first point in the third quarter was scored by Askar Maidekin, who realized one free throw. Krasnodar team tried to break away, but one more point from Askar and a three-pointer from Ojars again made the score equal. Silins was the most active in the first half of the third quarter and even evened the score twice in the last couple of minutes. “Lokomotiv-Kuban” were ahead, but our guys constantly stepped on the opponents' heels and made them nervous. Jeremiah Hill equalized the score twice before the end of the quarter and then gave an excellent pass to Nikolay Bazhin, who put «Astana» ahead in the last minute of the period. Krasnodar managed to cope with their nerves, but the last word in this quarter remained with Anton Ponomarev — 64:62 in favour of “Astana”. In the final ten minutes, the stubborn struggle continued. Nervousness began to interfere with the game of our team and this negatively affected the quality of the game. “Loko” came forward by five points, but Martins Meyers was able to change the situation and single-handedly won back the gap. However, the rival broke away again. At the start of the seventh minute, one of the key moments of the match took place. Adonis Thomas earned a foul, and most importantly, he forced the Kuban leader, centre Reggie Lynch, to break the rules for the fifth time, who went to watch the match from the bench. Further, Meyers' points again brought balance to the game, and Hill's three-pointer put the hosts ahead. There were less than two minutes left to play, and the tension grew more and more, but it did not prevent Adonis Thomas from realizing a crucial three-pointer thirty seconds before the end — as a result, +4 for «Astana”. The coaching staff of Krasnodar, naturally, asked for a time-out, but Emil Rajkovic also had time to give valuable instructions to his team. The Kubans were able to force the hosts to make a shooting foul and realized their free-throws attempts, reducing the gap to two points. “Astana” understood that time was on their side and were in no hurry to attack, but the threat to our victory in today's match was still high. Michael Thompson rushed under the basket, but could not realize his attempt, but Ojars Silins backed up his team-mate in time and scored a very important finishing goal, returning 4 points of advantage and, in fact, deciding the outcome of the game. The Krasnodar team had very little time left and they failed to come up with something — 86:82 the first victory of “Astana” in the new year.

Consequences: Despite the victory, «Astana» remained on the tenth line of the tournament table, but today our team can rise one line higher in the event of a victory of UNICS over PARMA. «Lokomotiv-Kuban» dropped from the fourth position to the fifth, but today it can also return to the starting position if the outcome of the PARMA — UNICS match is opposite, that is, if the Permians win.

«Most productive:
«Astana» head coach — Emil Rajkovic:
- I must say that I am very pleased with the victory over «Lokomotiv». They have one of the best offences in the League this season. I think we played well in defence. Today all 12 players have given their best and demonstrated dedication in defence. This is a very important victory for us.

«Lokomotiv-Kuban» head coach — Evgeny Pashutin:
- It was a tough game. We controlled the game in the 2nd quarter, but in the 3rd quarter we didn't play hard enough in defence, that is, we allowed Hill and Thompson to attack freely. We need to improve our defence and fight to win.

Next match: Due to the postponement of the home series of the National League against «Barsy Atyrau», which was supposed to take place in the capital on January 12 and 13, «Astana» will now play the next away games only on January 17 and 18. Our guys for the first time since the season of the Championship of Kazakhstan will meet with Kostanay «Tobol». The next rival of the capital team in the VTB United League is «Yenisey», which will meet on January 24 in Krasnoyarsk.