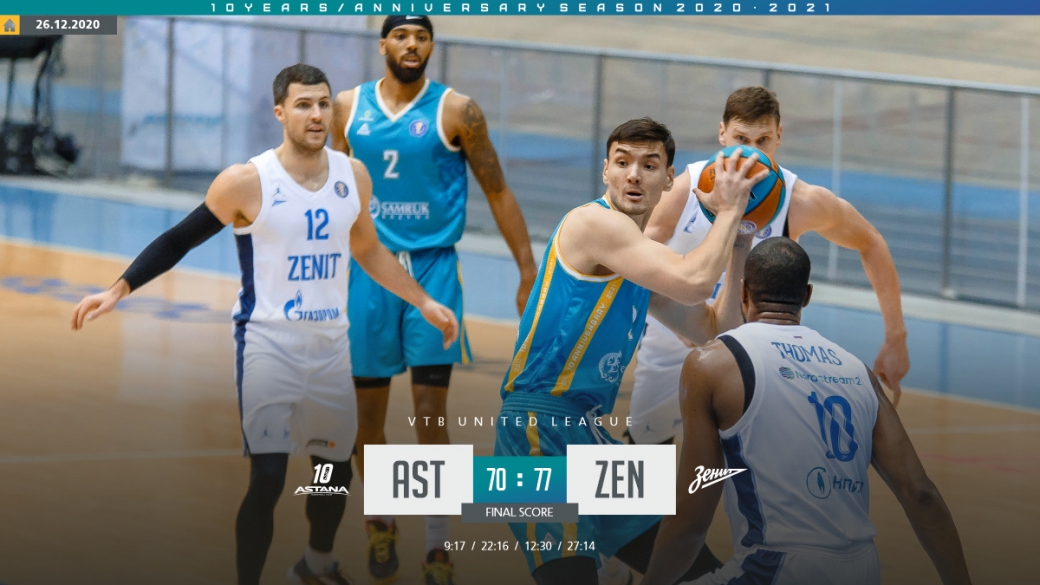 The pre-New Year home game of the basketball club «Astana» with the leaders of the VTB United League — St. Petersburg «Zenit» was not easy. Emil Rajkovic's players made a rapid comeback from -20 in the third quarter and in the dramatic ending were one step away from revenge.

After the jump ball, the ball went to our rivals, but in their first attack, they did not succeed, although our guys did not manage to open a score either. Moreover, the players of “Astana” were picking up fouls very quickly, so Emil Rajkovic had to make a substitution, removing Martins Meyers from the court. The score was opened only in the second minute of the game — after Meyers' foul, Arturas Gudaitis scored one of the free throws. The next effective attack happened even more than a minute after, but this time our Ojars Silins distinguished himself, bringing “Astana” forward. In general, in the first five minutes, both teams had only ten points, four for “Astana” and six for St. Petersburg. But if “Zenit” slowly pick up the pace, then Astana's balls stubbornly did not want to fly into the rivals' ring. With a gap of almost ten points, just over three minutes before the end of the quarter, Nikolay Bazhin, at last, scored a long-range shot.  The final score based on the starting ten-minute was set by Jeremiah Hill — 9:17 in favour of “Zenit”. Naturally, nine points in ten minutes was a very unsatisfactory result, but the opponents were not so effective either, and it is not surprising because both teams played defence. In the second quarter, the game pattern began to gradually become more dynamic, and our guys' situation began to improve. Bazhin, Marble and Thompson distinguished themselves, thanks to their efforts the difference in the score was only 4 points. However, the Petersburg team grabbed the initiative and kept the advantage in the region of 8 — 5 points for the next few minutes. “Astana” coped well with the role of catch-ups and achieved their goal three minutes before the end of the first half. Michael Thompson hit the floater, earning a free throw, and after his implementation the score became equal. The last minutes of the quarter passed even more dynamically. “Zenit” implemented their attacks, but immediately received a response from our players. The score became equal three more times, but the last attack was with the opponents, who successfully realized it and were in the lead after twenty minutes of the game — 31:33. 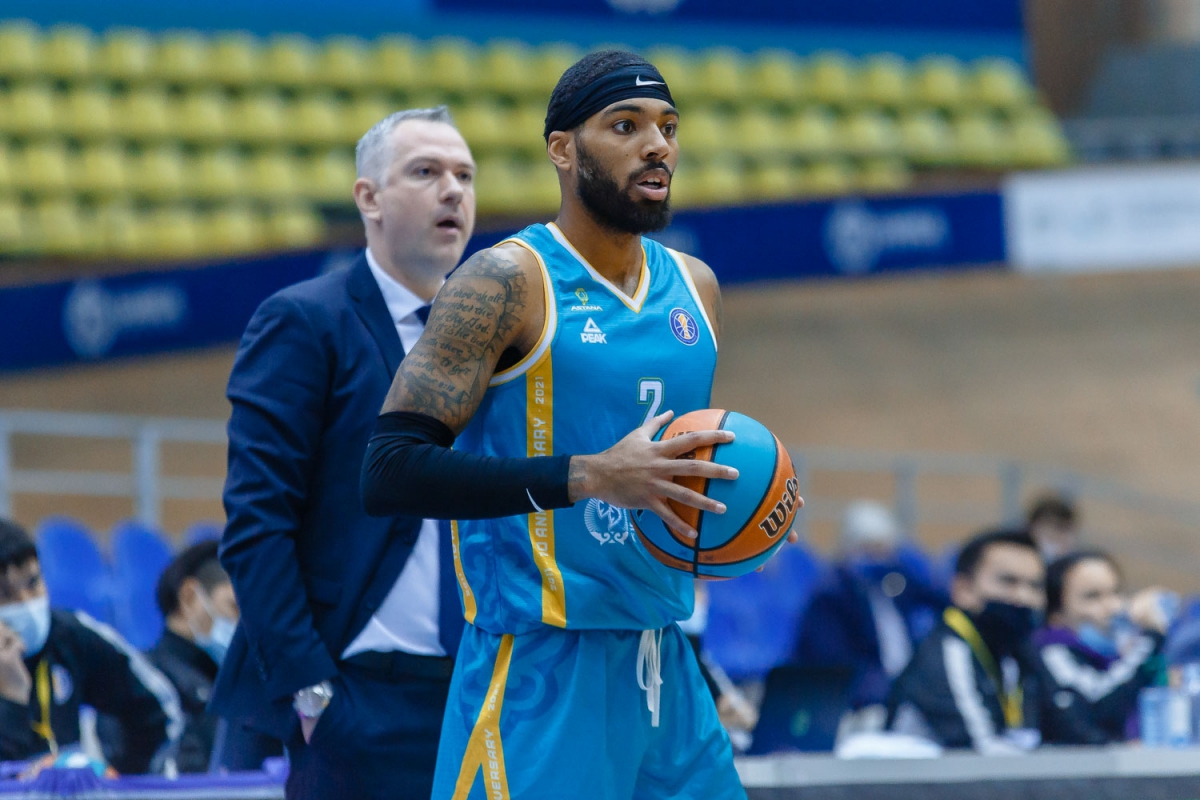 If the first quarter was not so bright, and in the second “Astana” improved the situation and there was a tough equal fight, albeit not productive, but a tough equal fight on the court, then the third quarter became extremely unpleasant for our team. After the side change, Emil Rajkovic's team could not score points for a very long time. Only after more than four minutes, Silins was accurate from the penalty line, but during this time “Zenit” pulled away from +2 to +14. At this point, we finally managed to solve the problem with accuracy and for the next three minutes, the difference in the score changed insignificantly, remaining in the region of 11-13 points. But the last two minutes of the period did not bring anything good when the shooting of the capital team began to fail again, and besides, the team made several unnecessary losses. Ten minutes before the end of the game, the situation turned pear-shaped- minus twenty points, and in the game with “Zenit”, it did not bode anything well. But as it turned out, it was too early to write off our team. Jeremiah Hill began the return of our team to the fight with an accurate three-pointer, he was supported by active actions by Nikolay Bazhin, Martins Meyers and Devin Marble. Less than three minutes after the beginning of the final quarter, the backlog of “Astana” was halved, and “Zenit” did not score a single point. But that was just the beginning of our comeback. Marble, Meyers and Hill once again distinguished themselves with effective attacks, and the difference in the score was only 4 points. Only a time-out on the initiative of the coaching staff of “Zenit” stopped the leap of the Kazakh team, and after it, the opponent hit the target for the first time in the fourth quarter, by that time almost five minutes of playing time had passed. After that, the game levelled off, and “Zenit” clung to the remaining advantage and began to give effective counterattacks. The lag of “Astana” reached -3, but after a couple of attacks, the teams were already divided by 7 points. The courage that our players had in the first half of the final quarter was knocked down by the rivals, and although the difference in the score was not very big, time was not on our side. “Astana” could not put pressure on rivals and lost the victory in this match — 70:77.

Most productive:
Head coach of «Astana» — Emil Rajkovic:
- Congratulations to «Zenit» on the victory. Our team had good moments, we managed to get back into the game, having won back a big advantage of «Zenit». But at the end of the match, we couldn't hold them back, especially Will Thomas. Also, we were unable to realize our open three-point shots and our field-goal percentage from the three-point line was very low. Of course, it is impossible to beat a team of the level of «Zenit» with such a percentage, given that they demonstrate a good game in the EuroLeague.

Head coach of «Zenit» — Xavi Pascual:
- We started the game well, but in the second quarter, we lost our advantage. After a long break, the situation repeated itself. We didn’t play badly, but at the end of the 3rd and the beginning of the 4th quarters, we again lost control over what was happening on the court. But then we started playing with more dedication and won.

Next match: On the first Monday of the new year, January 4, the capital's basketball players will host the Polish “Zielona Gora” in the VTB United League return match.