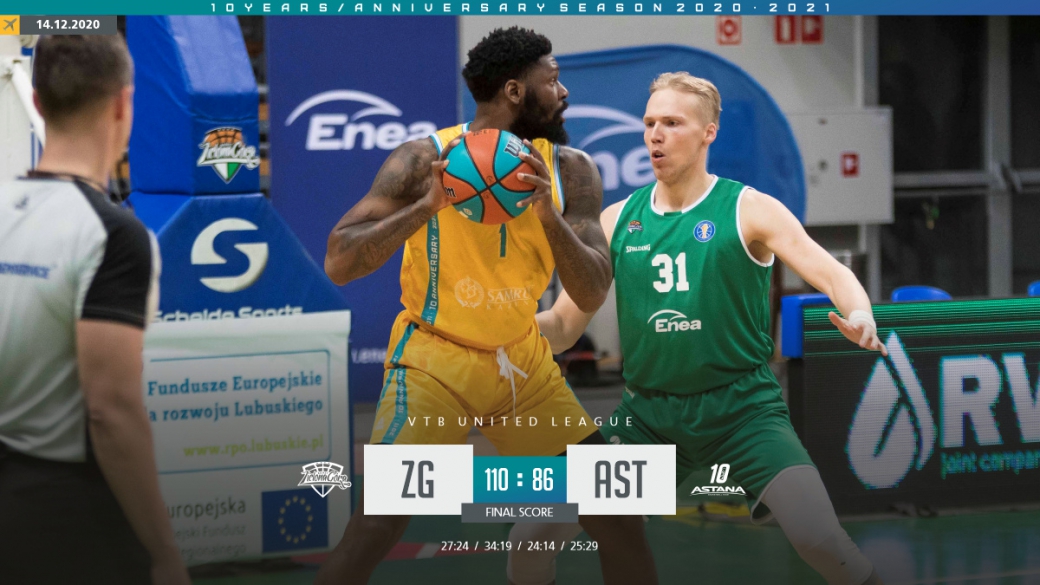 Basketball club «Astana» could not cope with the pressure of the Polish «Zielona Gora» in the away game in the VTB United League and suffered a painful defeat, which was the first in the history of the meetings between the teams.

The jump ball remained with our team, but the Kazakh team failed to score points in the first attack. The same happened with the hosts, who in their first attack could not realize a throw, although there was one after the referee's whistle after a foul in the attack. Then Adonis Thomas stepped in, he took the lead and opened the scoring. In general, Adonis was very active in the first minutes of the game and effectively completed a series of attacks, and then add to this an accurate three-pointer from Michael Thompson and the start for “Astana” looked pretty cloudless. However, our rivals did not stay idle and constantly stepped on the heels of Emil Rajkovic's team, playing the role of catch-up for a while. Thanks to the “and-one” from Nikolay Bazhin, as well as points from Marble and Thompson, the Kazakhstani squad was in the lead by six points. Nevertheless, the middle of the first quarter turned out to be very unsuccessful for “Astana”, in two minutes +6 quickly turned into -4. By the end of the quarter, the teams were already playing opposite roles than in the first minutes — “Zielona Gora” was pulling away, and “Astana” was catching up. The three-pointer from Jeremiah Hill helped to catch up with the rivals forty seconds before the end of the quarter, but the last word in the first game segment remained with our rivals — 27:24. In such a game, a gap of three meant nothing, but there was a 'secret weapon' in the rivals' camp — ex-player of our team Jeffrey Grosell. Martins Meyers and Jeremiah Hill did not allow the opponents to increase their lead, but despite their efforts, it slowly but surely grew and closer to the equator of the second quarter became double-digit for the first time. Not everything went well in the attack, and the defence could not cope with Grosell, and the result was -15 points in ten minutes if we add to this three more points behind from the first quarter and we get the final and disappointing difference in the score at the end of the first half of the match — 61:43. 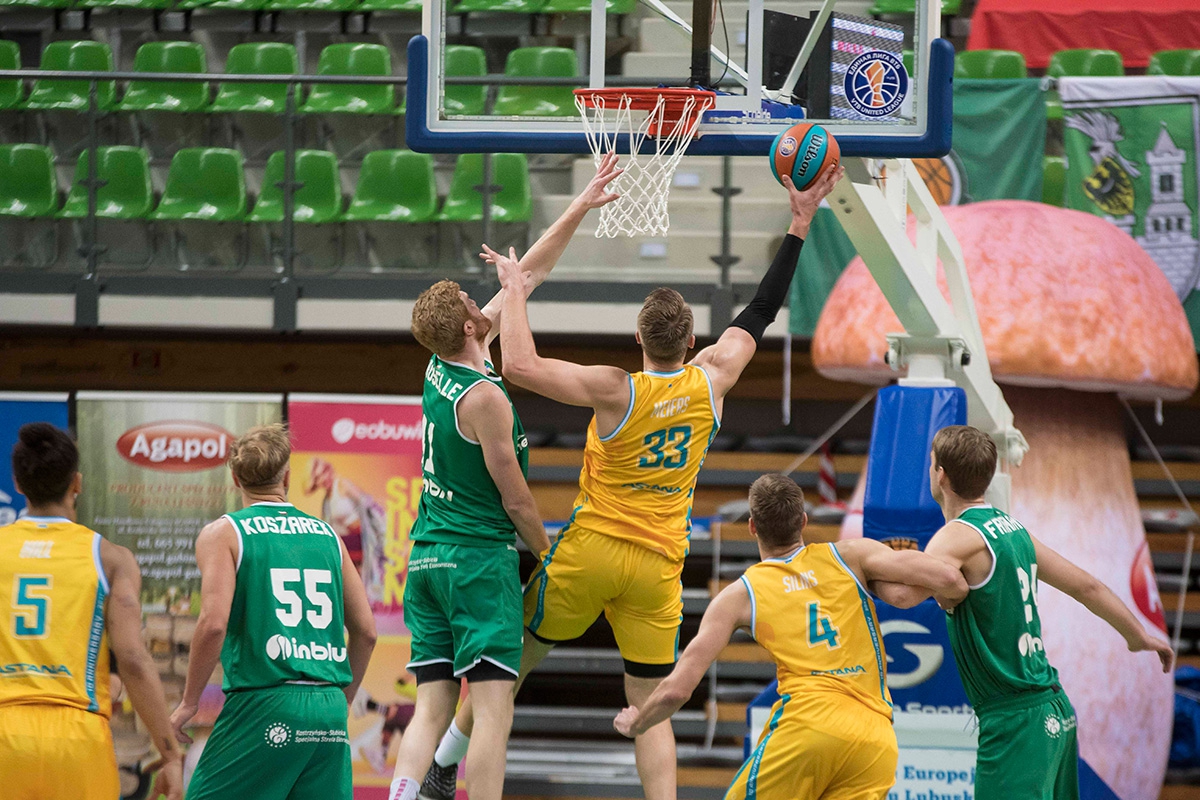 By the way, Jeffrey Grosell scored two points more than our entire team in the second quarter. After switching sides, it was crucial to speed up and start to recoup in order to count on victory. But alas, the first five minutes of the third period did not bring anything at all. In five minutes, “Astana” only once was able to effectively hit the target — Kolya Bazhin was accurate from the free-throw line with only one of the two attempts. Meanwhile, the Poles were in control of the game and by the middle of the quarter had already won almost 30 points. Emil Rajkovic was clearly not satisfied with this situation, and he used a time-out, after which things went much better, but the opponents always responded to the effective actions of our players. A couple of minutes before the end of the third quarter, the hosts' lead still reached 30 points, but not for long. “Astana” until the end of the quarter realized a couple of the attacks, but also missed one, as a result of which they lost twenty-eight points before the final quarter — 85:57. Such a situation was far from winning, and it would take a miracle to make a comeback, but it did not happen. “Zielona Gora” confidently maintained a more than comfortable distance, and the last chances of winning the game for our team were fading away. Five minutes before the end of the game, the rivals were 29 points ahead of us, and the outcome of the meeting was already foreseeable. The game was on its way to its logical conclusion, and the Polish team not only broke the 100-point mark for the first time of the season but also renewed their team record in the VTB United League, winning the match with a score of 110: 86.

Most productive:
«Zielona Gora» head coach — Zan Tabak:
- Today we did a great job in defence. At some points in the game, we completely blocked the opponent's attacks. Even though we scored 110 points, I am glad for our efforts because we lacked it».

Head coach of Astana — Emil Rajkovic:
- «Zielona Gora» fully deserved to win, today the opponent was much better than us. In this game, I did not recognize my team. We must conduct a deep analysis and take steps to prevent that from happening again».

The next match: the capital team will go straight from Poland to Perm, where on Thursday, December 17, they will play an away match with the local team «Parma» in the framework of the VTB United League.