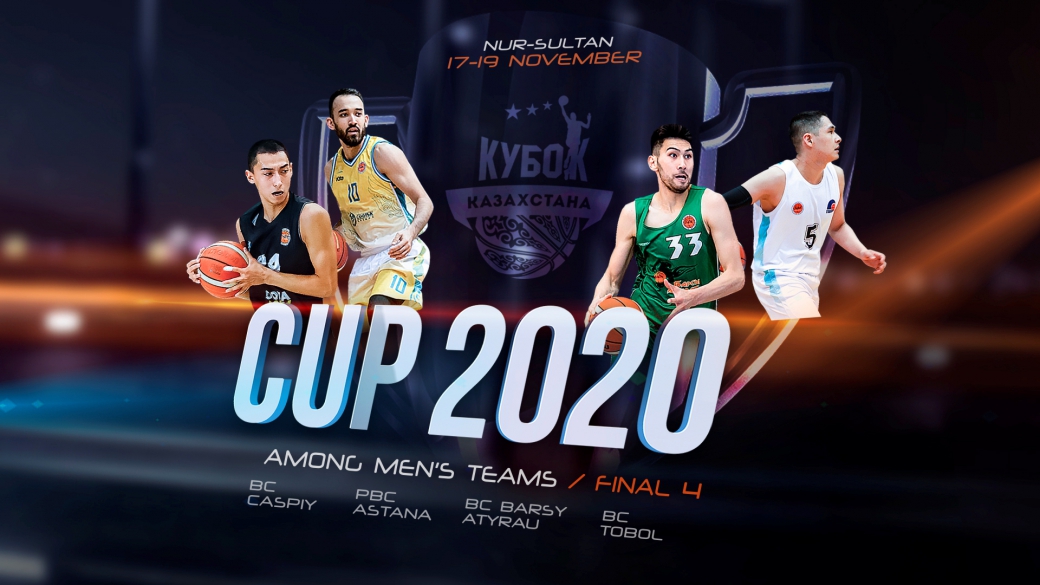 The competition for the main trophy of the Kazakhstan Basketball Cup among men's teams in 2020 will take place from November 17 to 19 in the capital.

The tournament has started at the beginning of the year with a preliminary stage — 1/4 finals, which ended in mid-February, and the Final 4 planned for the end of March was postponed due to the state of emergency introduced in the country because of the COVID-19 pandemic.

This year, seven teams are taking part in the tournament, three of which have already completed the tournament eliminating in the quarterfinals. The presidential basketball club «Astana», the winner of the XXVIII Championship of Kazakhstan among men's teams of the National League, according to the terms of the Regulations on the tournament, does not take part in the preliminary stage and directly enters the semifinal stage of the Final 4. The remaining six clubs — five members of the National League this season and “Barsy Atyrau 2”, who took part in the main championship of the country last season, fought for entry to the Final 4 of the Cup of Kazakhstan in two-game series of 1/4 finals.

The fate of the first ticket to the Final 4 was decided in the Atyrau when the main team of «Barsy Atyrau» left no chances to their teammates from the farm team — 85:46 and 49:61. The rivals of the green-whites in the semifinals were determined in the confrontation between “Tobol” and “Aktobe”, the undisputed winners of which were the Kostanay basketball players with the score 103: 80 and 77: 101. In the third pair of quarterfinalists, “Sinegorye” lost to “Caspian”, having received a technical defeat for not showing up for the return match, while in the first game the Kokshetau team won over rivals — 93:58.

Thus, on the first game day, November 17, in the semifinals, «Barsy Atyrau» and «Tobol», the hosts of the tournament «Astana» and «Caspiy», will meet together. The next day, the teams will have time to take a breath before the decisive games, and on November 19 the matches for the prizes and the award ceremony will take place.

ATTENTION! Due to the restrictive measures introduced because of the coronavirus pandemic, matches will be played without spectators.