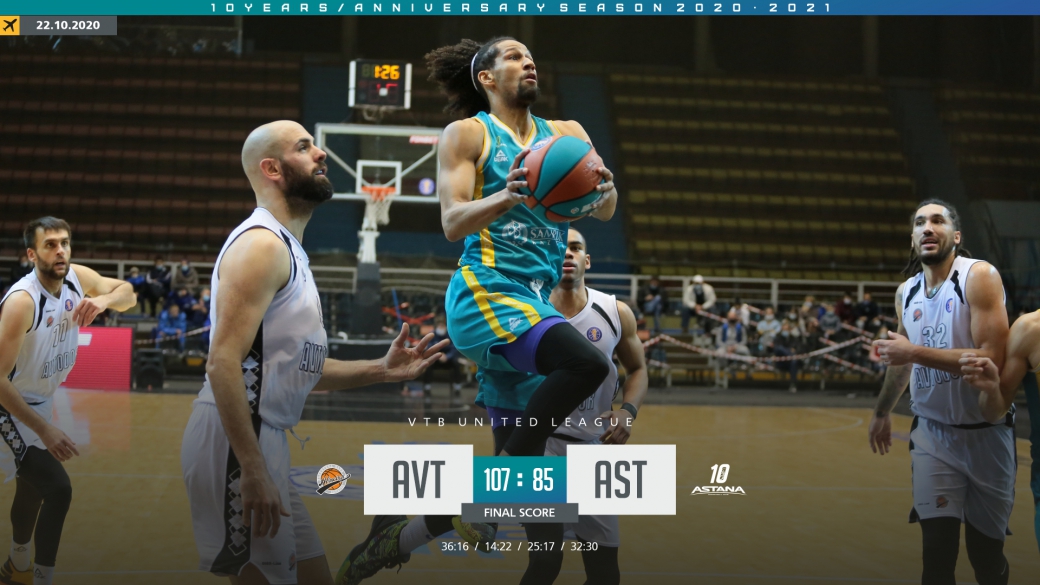 «Astana» could not hold back the pressure of «Avtodor» in Saratov

The terrible first quarter in Saratov in the VTB United League match against the local Avtodor ruined the game for the Astana basketball team for this match, in which they suffered a very painful defeat.

After the victory in Moscow over the local Khimki, the victory in Saratov seemed very feasible. Avtodor lost big in the first two games, in the first game — 23 from PARMA, and then — 34 from CSKA. Considering this, everyone thought the chances of Astana to win this game were very high. But the Saratov team approached this game extremely motivated and surprised their rivals and fans as well as everyone else.

The start of the match did not bode well for anything. Martins Meyer opened the score in the match not only for Astana but also the total score. Two minutes later the score was still 5:5, but then Avtodor just rushed forward. They could score every ball, and with a 7-point gap, Emil Rajkovic took a time-out to bring the game back, but that didn't help. The hosts continued to gain points with an enviable constancy, and the game of Astana was not very good neither in defence nor in the attack. Literally, right after the equator of the match, the players of Saratov were already in the lead by 10 points and were not going to stop. Adonis Thomas from Astana distinguished himself in the first quarter. But the opponent gained such a frantic pace that at that moment they didn't care who to play with. A minute and a half before the end of the first quarter, Avtodor reached a critical 20 points advantage, and our team simply could not stop the rivals. In just the first 10 minutes, the Saratov team scored a record 36 points. Astana scored 16 points, which was a disaster in comparison with the score of rivals. In the first quarter the hosts played “just perfect”: their percentage of hits, both from up close as well as long-distance attempts, was exorbitant, and Astana completely lost the rebound. Hence we see the following result. In the second quarter, Saratov did not intend to stop and increased their lead even more. In the middle of the quarter, the difference remained extremely unsatisfactory for our team — 24 points but then “Astana” began to gather their tempo. They made a good ending to the first half, and the difference contracted to 12 points. 50:38 that's how the first half ended and the numbers didn't seem so intimidating, especially after the last minutes of the game. 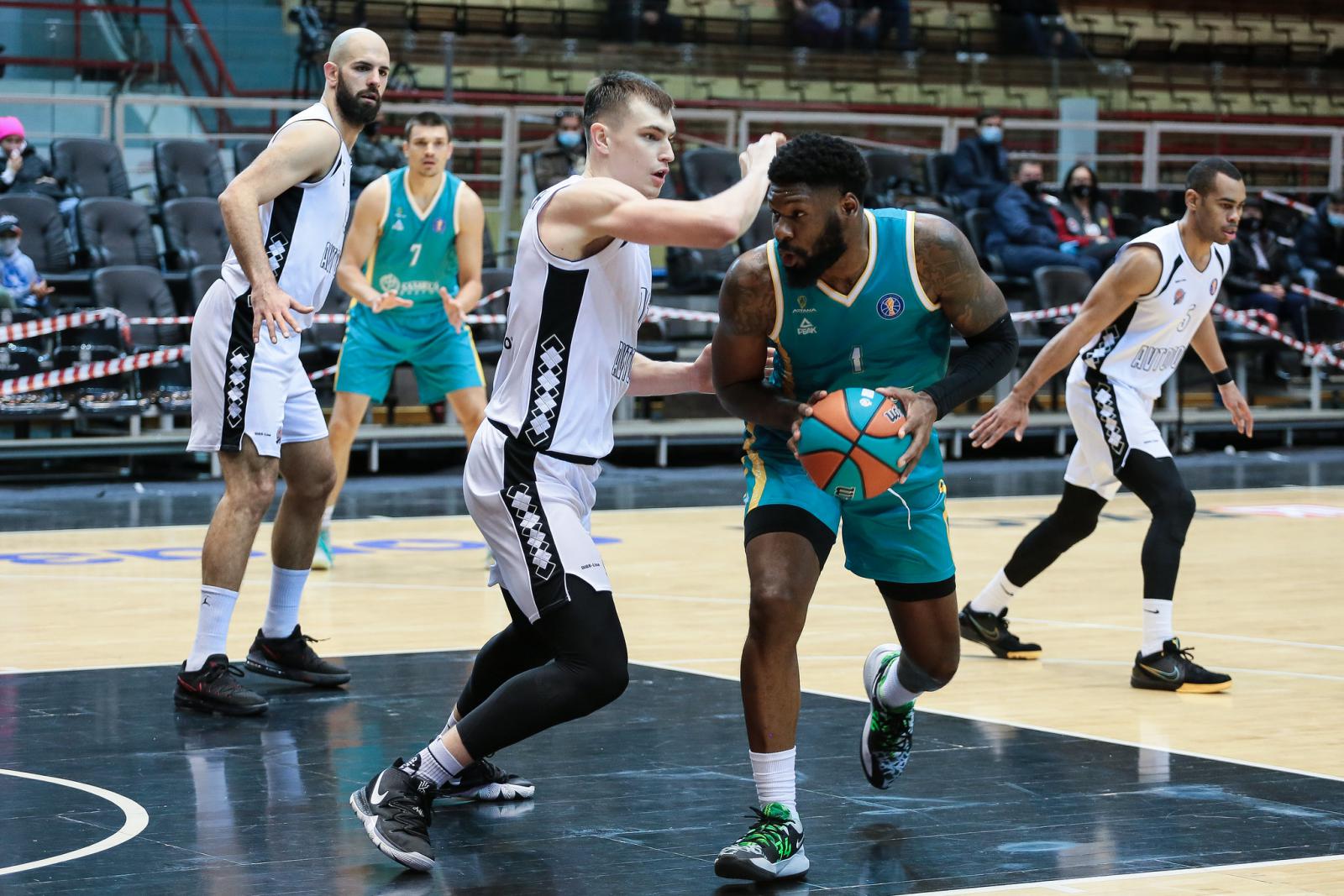 The start of the third quarter and a three-pointer from Jeremiah Hill inspired even more hopes in our team's comeback because there were only 9 points left to win back, but we didn't manage to seize the moment. Avtodor got back into the game, and their lead quickly became double-digit. Our guys again missed the thread of the game, and the opponent's game was in tune again. By the middle of the third quarter, our gap again approached the 20 point gap and then rose further. No matter how hard Astana did try, all attempts were stopped by the opponent and did not bring the desired result. Before the final 10 minutes “Astana” was losing 20 points (75:55), which is quite a lot. Hopes for the fourth quarter disappeared with every minute because no matter how actively our team acted, the opponent always fended off in response. Astana in three minutes was able to reduce the gap to 15 points and the intrigue began to flare up, but Avtodor again began to dominate the game and again approached the comfortable 20 point gap. Five minutes before the end of the match, it had unfortunately already become quite obvious that today we would not see a victory. The end of the match took place in more open basketball, the teams constantly increased their score, but the gap practically did not close. As a result, Avtodor won a landslide victory with a score of 107: 85. 85 points per game is not that little, but in this game, the opponent could not simply be held back. Of course, the first quarter was discouraging, but in the middle of the match, there were chances to turn the game around. The opponent, today, played an excellent match, but the weak play in defence did not allow them to hold back the pressure, it is also worth noting that 15 losses against 8 for the opponent did their job.

Most productive:
Avtodor head coach Gordy Herbert:
—  «I think we had a great first quarter, and at the beginning of the game, we were at a crazy pace. Several times Astana tried to return to the game, but we were very responsive, united as a team, showed good basketball and confidently led in the score throughout the whole game. Today at the court, the boys showed the results of those 10-12 days of hard training.»

Astana head coach Emil Rajkovic:
— Congratulations to Avtodor on the victory – our rival has played great, was extremely motivated from the very beginning. We allowed too many points in the first quarter, after which it was very difficult to return. A close second away game after the victory over Khimki showed that it is too early to relax. We need to work harder, especially in defence, if we want to win.

Consequences: Avtodor won the first victory of the season and it allowed them to rise to the ninth line of the standings, coming close to the playoff zone, and push our team to the tenth line. The defeat for “Astana” is very painful, but there is still almost a whole season ahead and there will be many more games.

Next match: one by one in the VTB United League matches are postponed, so Nizhny Novgorod went into quarantine and their next games were postponed indefinitely. Let's hope that the coronavirus will recede and VTB's schedule won't be altered as often. So far, the next game of “Astana” is scheduled for November 1 with Zenit in St. Petersburg. And on October 26 and 27, two games with Caspiy in the National League are planned.