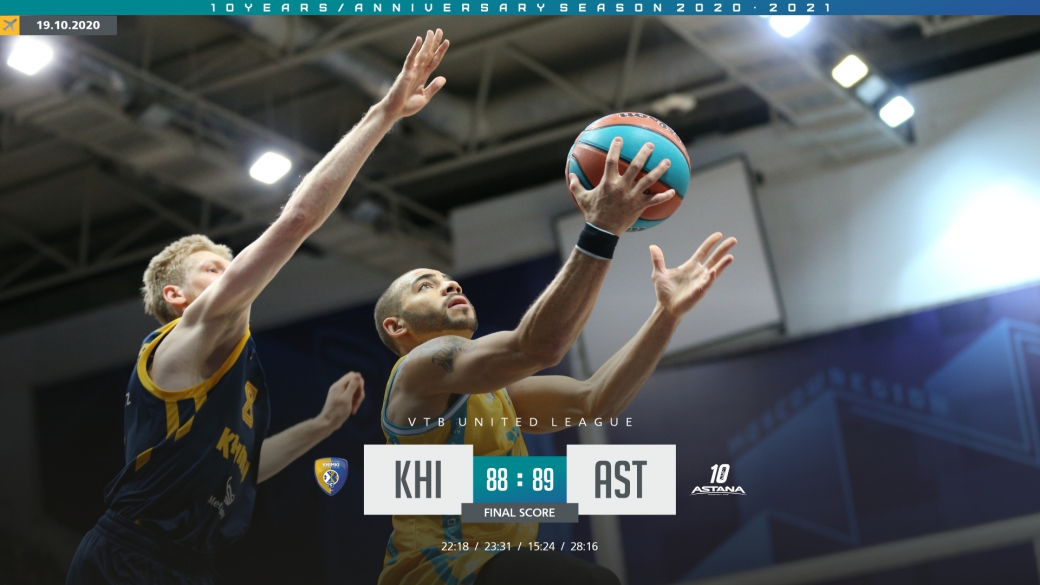 In an incredibly intense away match of the VTB United League, the team of the basketball club «Astana» confidently dominated over Khimki for most of the game and snatched the victory from the hosts in the thriller end.

In an incredibly intense away match of the VTB United League, the team of the basketball club Astana confidently dominated over Khimki for most of the game and snatched the victory from the hosts in the thriller end.

A trip to the Moscow region was very important for our team as there were two defeats in a row and no victory since the beginning of the season. But no other than Khimki were waiting for our team, and this team is rightfully considered one of the best in Europe. True, Khimki is now in a very difficult period, there are a lot of injuries and positive tests for coronavirus, and this naturally negatively affects their game and the roster. In the last matches in the European championship, the Moscow Region team played in an extremely truncated roster: in one game with 8 players, and in the second, Rimas Kurtinaitis had only 7 people at his disposal. But a day before the game with “Astana” it became known that the leaders of “Khimki” Alexey Shved, Janis Timma, Jordan Miki and Evgeny Voronov would return to the squad. The departure for our team was further complicated by the fact that due to the pandemic we had to fly to Moscow via Istanbul. It is also worth noting that Astana has never won in the Moscow region and many favoured hosts in this game. Another interesting fact, in this match for our team Ojars Silins, made his debut.

The jump ball was won to the hosts, and Janis Timma in the first attack demonstrated that Khimki's intention was serious, scoring three points from the pass of Alexey Shved. Our team did not immediately enter the fight, and a little more than a minute after the start was behind by five points. Nikolay Bazhin coped with the loss in the previous possession and, having scored a three-pointer, opened the score for “Astana”, and Michael Thompson evened the score a little later. After that, the swing began, then one or the other team came forward, no one could pull away, and the scoreboard often showed a draw. In the second half of the quarter, the hosts clung to their advantage, but they did not manage to break away from their rivals. The most they achieved in the first quarter was 5 points of advantage, and as a result, after ten minutes of the game, the Kazakhs were losing only 4 points. In the second quarter Astana started to “sniper”, and three-pointers flew with enviable stability into the ring of Khimki. Both Rustam Murzagaliev and Jeremiah Hill distinguished themselves, and the debutant Ojars Silins also showed an excellent game. “Khimki” clearly did not expect such a hail of long-range hits and let our team gain an advantage. After that, the hosts got together a little, now our big ones did not stand aside, Dmitry Gavrilov brought the lead to seven points, and Adonis Thomas extended it further. The next minute did not work well for our squad, and the hosts quickly levelled the score. Emil Rajkovic had to take a time-out to bring our guys back to their senses and it worked. Astana finished the first half of the match well, and Adonis Thomas marked + 4 for Astana after two quarters. In the first half, “Astana” looked very good, there were ups and downs, but there were no obvious failures, and the same could be said about our rivals, but in general, the game was very tense and the teams went neck to neck. 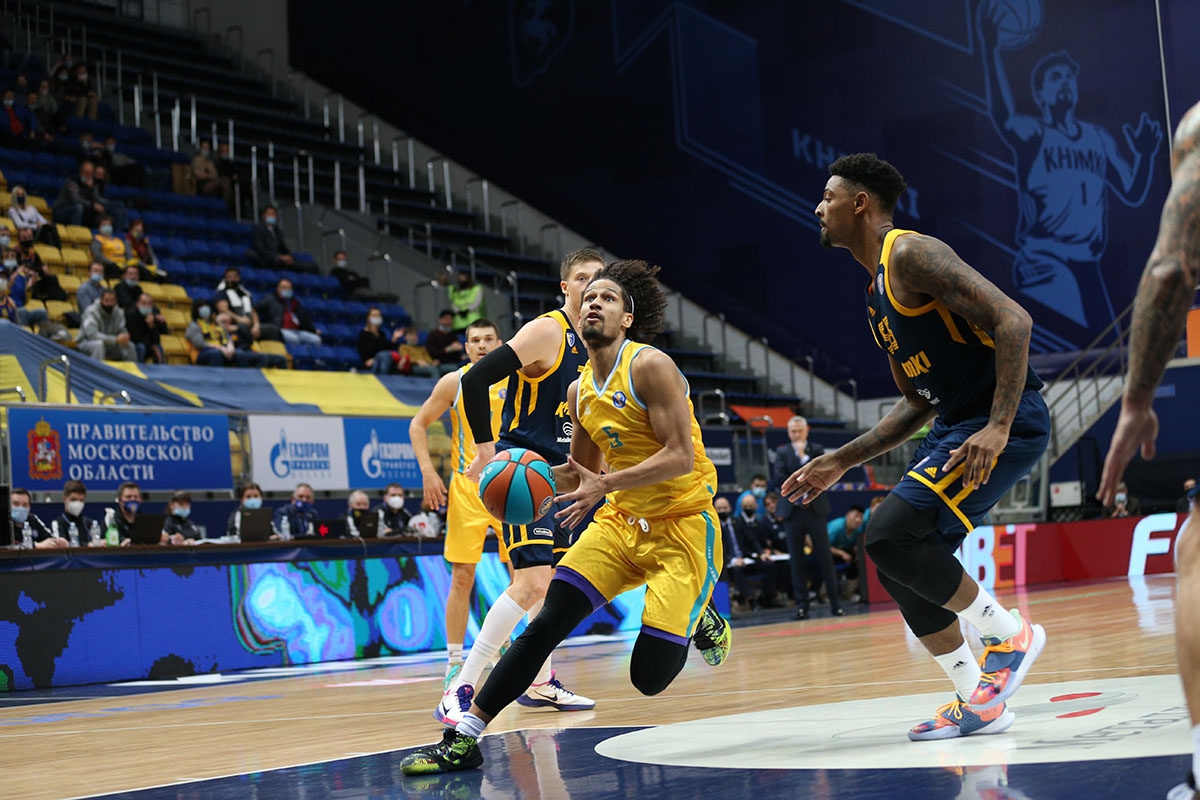 The third period began with the impressive work of the team of Jeremiah Hill and Nikolai Bazhin, they brought five more points to the advantage of our team, which came close to the double-digit figure. Our team was not taken aback by Devin Booker, who “destroyed” the ring of “Astana” with his dunks. “Astana” showed a confident game, and all the same Jeremiah Hill brought our lead to 10 points. No matter how hard the hosts shot, our team found an excellent response to each of their attacks and kept their double-digit advantage. Three minutes before the end of the third segment of the game, Ojars Silins scored another three-pointer and Astana led +15. Hill, after an excellent pass from Gavrilov with a dunk, brought the lead to 17 points. Until the end of the third quarter, Khimki slightly reduced the gap, but before the final quarter were losing 13 points. “Khimki” is not a team that gives up, especially since 13 points is “not a sentence” and it is quite realistic to win them back in 10 minutes, which the hosts began to prove in the fourth segment of the game. And if at the start of the quarter, thanks to the efforts of Dmitry Gavrilov, there was no noticeable change in the game, then the initiative passed into the hands of our rivals, who rapidly began to reduce the gap. By the middle of the quarter and five minutes before the final siren, the hosts were losing only 5 points. An important “and one” from Adonis Thomas could not break the pressure of Khimki and the next three minutes were a disaster for the team of Emil Rajkovich. During this time, they did not score a single point, and the opponent spent time with a breakthrough 12-0 jerk, which allowed them to move forward by 4 points a minute before the final siren. Nerves were strained to the limit, and not only among the players but also among the referees, who in this match “tortured” the video operators to replay the video of the game. Ojars Silins made an important three-point shot, although he missed the goal, Ojars earned a foul and the right to three free throws, which he successfully scored. -1 point and the chances of our team significantly increased, although it was Khimki's turn to attack, they did not bring it, to success but on the other hand, Adonis Thomas played reliably and with 15 seconds before the end, Astana was already one point ahead. Alexey Shved was unable to use his opportunity and missed the ball over the baseline. 8 seconds left, Astana is ahead and has possession. Of course, a quick foul by Khimki suggested itself, which they successfully implemented. Adonis Thomas had two free throws but missed both. It immediately reminded of  October 2017, then the situation was similar. Then, in Khimki, Astana, in the end, lost one point and earned two penalties, if our team had scored both, there would have been a victory, if had scored one and there would have been overtime, but both attempts were unsuccessful and Astana lost. But let us return to the current game, in which the situation was different — “Astana” wins one point, but after the rebound, Khimki had 6 seconds to attack. But fate was on side of our team this time and the hosts were unable to realize the last chance and the historic victory is ours — 88:89. Intense struggle, the transfer of initiative from hand to hand, long views of video replays, a nervous ending and all this is seasoned with a good pinch of luck — this is what this game will be remembered for.

Most productive:
Khimki head coach Rimas Kurtinaitis:
— «It's too bad that we lost. We knew it would not be easy because four new players returned to us; I tried to use three of them, but they were without basketball for a long time. It's hard to get the rhythm right away. However, the problem is not even that we did not play well, the problem is how we played in the ending. They took the lead, changed the course of the game and failed to defend this result. After that, they fouled on a three-pointer, they decided to throw a three-pointer when they needed to score a point in five seconds, gaining speed. This is all not professional. Our main problem this season is that we don't know how to figure out the endings and how to make the best decision in order to win. A similar situation was in the match against Panathinaikos when in seven seconds we were unable to make a good shot.»

Astana head coach Emil Rajkovic:
— «First of all, I want to congratulate my players and thank them for their dedication and faith in this victory. They showed discipline and made tactically correct decisions, which we worked out during our practices. I also would like to distinguish the Khimki players. They have a difficult schedule and big staffing problems, however, they played very well against Real Madrid and Basque Country, with seven to eight people. At the same time, several of their players have just returned to the court, I mean Shved, Timma, Mickey, Voronov, and all of them are not in their best shape. I sincerely wish them to return to optimal condition soon and show the basketball that they have demonstrated before all these problems began. I think this is the first away victory of Astana over Khimki for the entire time that I have been coaching this team, and I am very happy with this result. We have an away match with Avtodor ahead of us, we are not returning to Nur-Sultan, but going straight to Saratov so that we have time to recover. Hope we have a good game.»

Consequences:  Khimki lost one line in the standings, going down to the eighth place, but Astana rose noticeably and approached the Moscow Region team right next to it, occupying the 9th line.

Next match: On October 22, Emil Rajkovic's players will again play away in the VTB United League, without returning home they will go to Saratov where they will play with the local Avtodor.