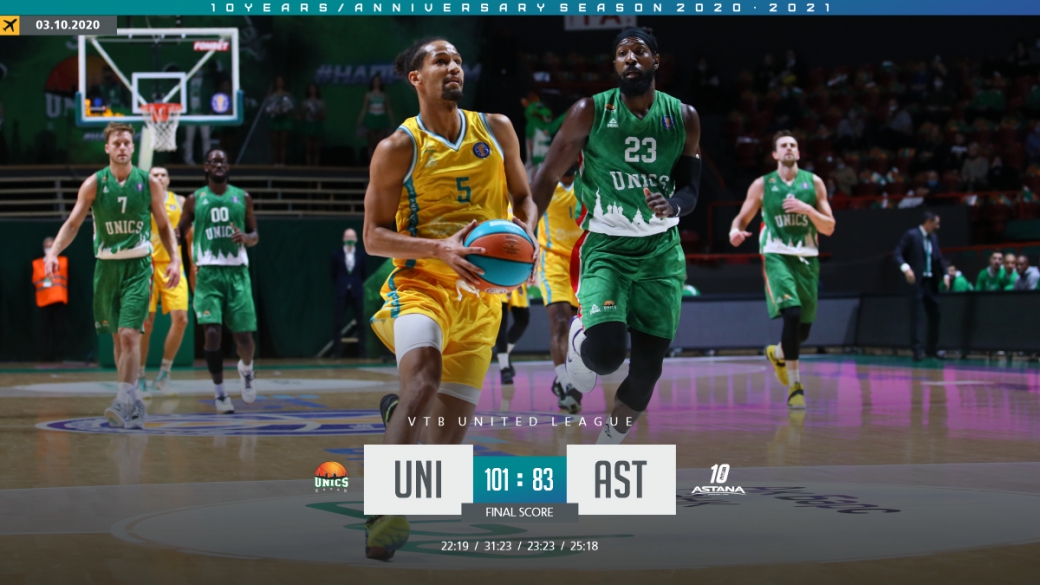 «Astana's» visit to Kazan ended in defeat to UNICS

The game between the basketball clubs Astana and Kazan UNICS in the away match of the VTB United League was not crowned with success for Astana - the game ended with the victory of the hosts.

For their first match in the new VTB United League season, UNICS Kazan declared the most effective players. The centre, the Greek player Kostas Kaimakoglou and the Russian player Artem Klimenko were the only ones not involved in the game among the 14 players announced for the season. Astana had practically the same players in the roster as in the match against CSKA, the only exception was the replacement of Maxim Marchuk with Adonis Thomas, who recovered from an injury.

Despite the fact that the toss was won by Astana, in the first attack our team failed to open a score. Moreover, the yellow-turquoise could not score points during the first three minutes of the game. Only at the end of the third minute, Michael Thompson unsealed the hosts' ring. However, UNICS during this time was not the most productive either, Kazan team managed to score only five points. During most of the first quarter, Astana adjusted to the game of the hosts, who quite dominated, although they could not pull away in the game. Nevertheless, Emil Rajkovic had to take a time-out, because three minutes before the end of the first quarter, his players were losing almost 10 points, and this tactical pause brought noticeable benefits. Our players began to play more confidently and significantly reduced the gap, moreover, they even had the opportunity to finish the first quarter in a draw. But the three-pointer in the last minutes was blurred, and the first 10 minutes were left for UNICS (+3). By the way, it should be noted that Astana players were pretty nervous at the start of the quarter and received five team fouls in five minutes. In the second quarter, the capital team played much more confidently and clearly coped with their nervousness, but UNICS also did not slow down and used their strengths to the full. Astana did not allow rivals to increase their lead, but they could not catch up with them either. For five minutes the difference between the teams was something between 5-8 points, but then the hosts began to gradually strengthen their positions and increase the gap. Thus, the team of Dimitris Priftis managed to complete the first half of the game with an advantage of more than 10 points — 53:42. It is worth noting that the Kazan team was doing very well with three-pointers in the first half and due to them that they achieved this advantage, and in other respects, they did not surpass our team. 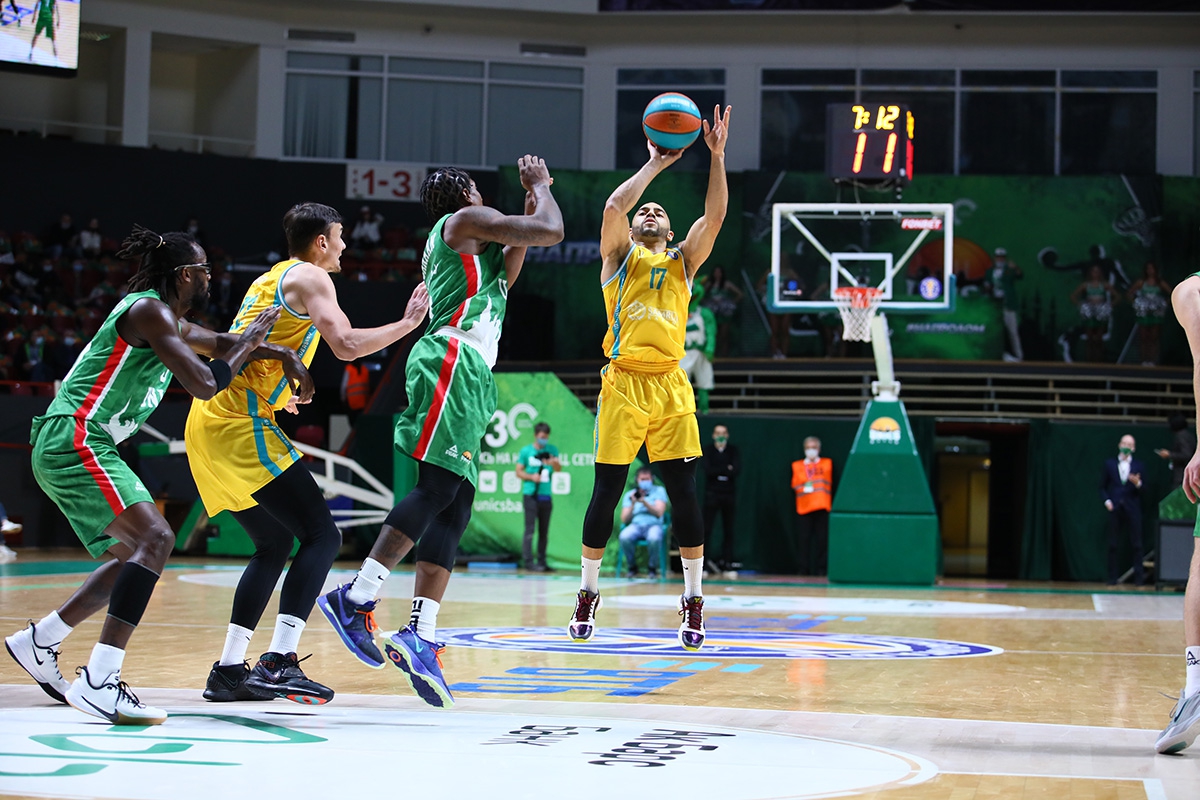 After a long break, Astana did not give up and fought for every point and for every centimetre of the court. The lag of the Kazakh team was gradually reduced and reached five points. The UNICS coaching staff took time-outs to slow down the pace of our team, after which the Kazan team acted more effectively and repelled the threat. Despite all the efforts of our players, by the end of the third quarter, the Kazan team was able to regain their double-digit advantage and won 11 points quite comfortably before the final quarter. The fourth quarter became extremely difficult for our team. The key players were already obviously tired, so also two essential players Jeremiah Hill and Martins Mayers could not continue the match to the end owing to fouls. Despite all the challenges, Astana was losing only 7 points in less than five minutes before the end of the game, and there was still an opportunity to snatch out a victory in this match. But today everything turned out not in our favour. UNICS played the last minutes of the match clearly better than our team and did not give any chances for Astana, which was playing out in a truncated composition. As a result, the defeat in Kazan was added to the loss from CSKA in Nur-Sultan — 101: 83 (22:19, 31:23, 23:23, 25:18).

Most productive:
UNICS head coach - Dimitris Priftis:
- First of all, I’m happy to get back to the games after months of waiting. Of course, I’m glad to win the first VTB United League game. Unfortunately, we had a unique and weird way to get prepared. We had to deal with many circumstances. Given all that, it’s great to win.

«Astana» head coach - Emil Rajkovikj:
- I should say that Dimitris Priftis has built an excellent team this season. I am not disappointed with the result, even though we lost. We faced a lot of difficulties during the preparation for the season and started working only 4 weeks ago. Until now, we are not in our game shape yet and as though we are continuing our preparation. Also, we are still waiting for two more players whom we had signed a long time ago to join us. I hope that before the game against Khimki, our squad will be complete and we will be in better shape.

Consequences: UNICS starts the VTB United League season with a victory, but for “Astana” this is the second defeat of the season in a row out of two possible ones. But let's not forget that our team has so far played only with the teams from the objectively «top four” in the league.

Next match: On October 19, Emil Rajkovic's players will again play away game in the VTB United League, this time they will go to the Moscow region to meet with Khimki.