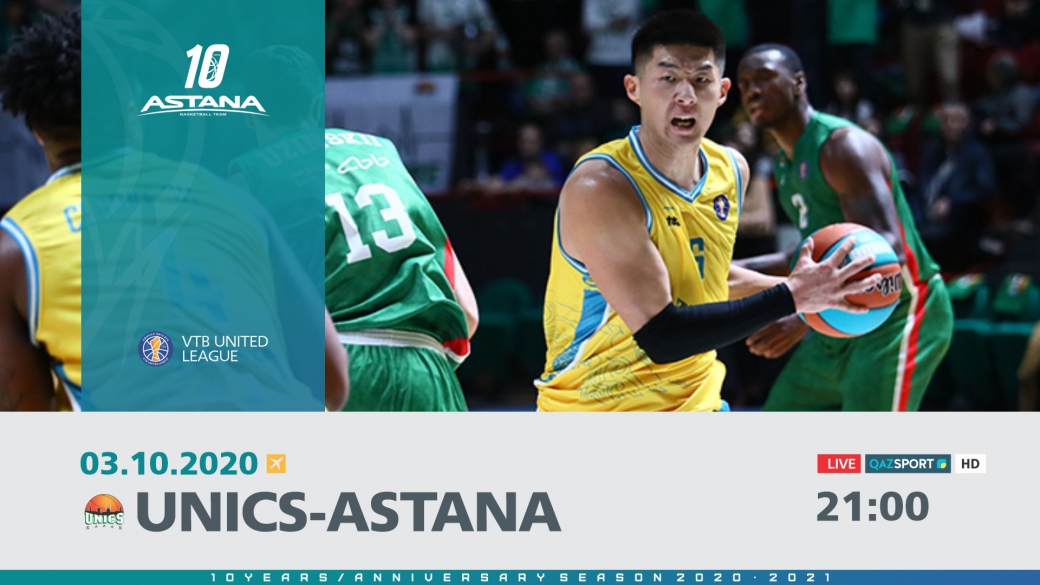 The first away game of the basketball club «Astana» in the new season of the VTB United League will be held in Kazan against the local UNICS. The match will take place on October 3, beginning at 21:00 Astana time.

UNICS - is a Russian professional men's basketball club from Kazan, founded in 1991. In addition to the VTB United League, this season the participate in the Eurocup.

As for the UNICS team, it has changed significantly since last season. Perhaps the main loss for the team was the departure of one of the leaders of last season — the American Eric McCollum, who signed a contract with “Khimki”. Also, Alex Tyus, Raymar Morgan, Jordan Theodore, Haukur Palsson and Jamil Wilson have left the team. Another import Elgin Cook left the team, but he did not play a single VTB United League game last season. Among the Russian players, Valeriy Likhodei left the team and went to Poland to play for the Anville team. Andrey Koscheev also left the team and the young Kirill Anoshin was not announced.

Five American players have joined the Kazan squad this season. John Holland, a shotting guard, started his professional career in Europe, playing for the French Roanne and Graveline Dunkerque, the Spanish Cajasol and the Turkish Besiktas. Then John tried his hand at the NBA, but only played a little for the Boston Celtics and Cleveland Cavaliers, and mostly played in the NBA development league in the Canton Charges and Austin Spurs. In 2019, he managed to play for Puerto Rican Santeros de Aguada and Filipino San Miguel Beermen, and he spent the entire last season in Israel's Hapoel Jerusalem. Point guard Nate Walters began his NBA career with the Milwaukee Bucks before joining the New Orleans Pelicans. Then there was the NBA development league and Grand Rapids Drive and two seasons in Europe — in Turkish Besiktas” and Serbian Crvena Zvezda. Then Nate again tried his hand at the NBA in Utah Jazz” but could not gain a foothold and moved to the Salt Lake City Stars, and then the French Élan Chalon. The last two seasons he spent first at Zalgiris, and then Maccabi, Tel Aviv. Point guard Isaiah Canan has a great career in the NBA, having played in such teams as the Houston Rockets, Philadelphia Seventy-Sixers, Chicago Bulls, Phoenix Suns, Minnesota Timberwolves and Milwaukee Bucks, and also played in the NBA Development League with the Rio Grande Valley Vipers, Northern Arizona Suns and Stockton Kings. Isaiah also had a small trip to China in 2019 for the Shandong Golden Stars team. Powerful forward Jordan Morgan started in Italy — Virtus Roma, and then moved to France, where he played in the teams Hermine de Nantes Basket and Paris Levallois. In 2016, he returned to the States, where he joined Canton Charge, but quickly returned to Europe, playing in the Greek Kõmis and Slovenian Petrol Olympia. He spent the last two seasons in Turkey with Banvit and Pınar Karşıyakaa. Forward John Brown before UNICS has spent four seasons in Italy, in the teams Virtus Roma, Universo Treviso Basket and New Basket Brindisi.

As for the Russian newcomers to the team, there are three of them. Powerful forward Pavel Antipov cannot be called a newcomer, because at different times he had spent 4 seasons for the Kazan team. In addition, he played for Spartak, Zenit and Lokomotiv-Kuban, and spent the last two seasons in Nizhny Novgorod. Powerful forward Alexander Razumov played for Zenit, but spent most of his career in the teams of the Russian Super League — Ryazan, Spartak-Primorye and Novosibirsk. Young shooting guard Georgy Zhbanov has spent the previous 4 seasons in Nizhny Novgorod.

For UNICS, this match will be the first in the VTB United League season, but before that, they had already played 4 matches, two in the preseason, with Avtodor and PARMA. And on September 30 UNICS played its first game in EuroCup, following which it lost to the Italian team Umana Reyer Venezia. Despite the defeat, the leaders of UNICS still can be distinguished for this game at the moment.
Jamar Smith in the match with the Italian team became the most effective and efficient in the UNICS squad. Excellent results were shown by John Brown, Isaiah Kanan and John Holland. Dmitry Uzinsky became the best Russian player. It is to this player that our team should pay close attention.

he coaching staff of UNICS Kazan has not changed at all since last season and still remains Greek. Dimitris Priftis is leading the Kazan team for the fourth season in a row and is assisted by two more Greek specialists Thomas Niku and Valiles Simtsak. Head coach Priftis has more than twenty years of a coaching career, which mainly took place in his homeland in Greece. He started at the head of the women's team Kalithea, then spent 10 years as an assistant coach of the Greek men's teams Daphnis, Ionikos, AEK and Aris. After that, he headed the coaching staffs of the teams Kavala, Kalithea and Kolosos. In 2014, he briefly became an assistant coach in the Panathiacos team, but then became head of Aris, where he became the coach of the year in the Greek championship in 2016. In addition, Dimitris Priftis has been an assistant coach of the main Greek National team for a long time. At the UNICS coaching staff in 2019, he was chosen as the coach of the “World Stars” at the VTB United League All-Star Game. 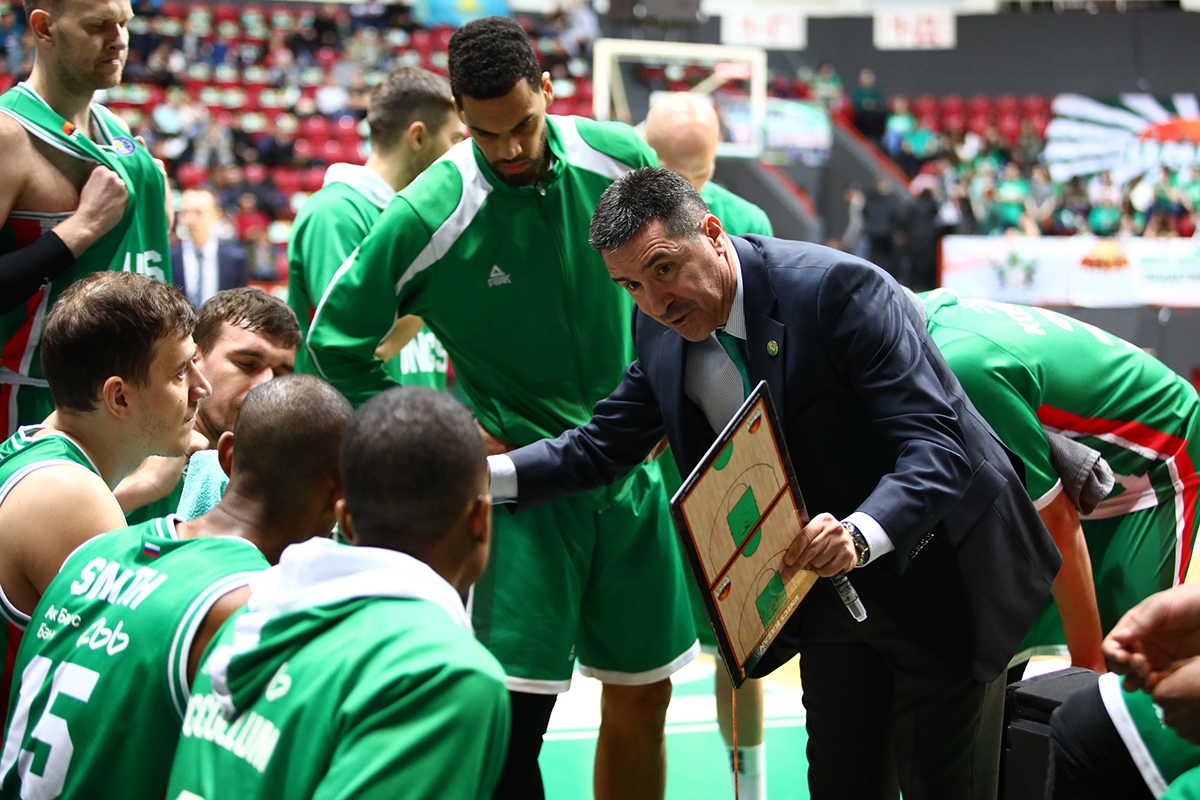 For UNICS, this is the first game in the VTB United League season, and Kazan currently has no points in the standings. “Astana” with one defeat is still at the bottom of the table, but a victory in this match can significantly raise our team in the ranking.

For the entire time in the VTB United League, Astana and UNICS have met on the court 15 times, while the capital team managed to beat eminent rivals from Kazan only twice.

Interesting facts:
The match will take place on Saturday, October 3 in Kazan at the Basket Hall arena, starting at 21:00 Astana time. The online broadcast of the match will be available on our website in the Match Center section, as well as live on the QazSport TV channel.