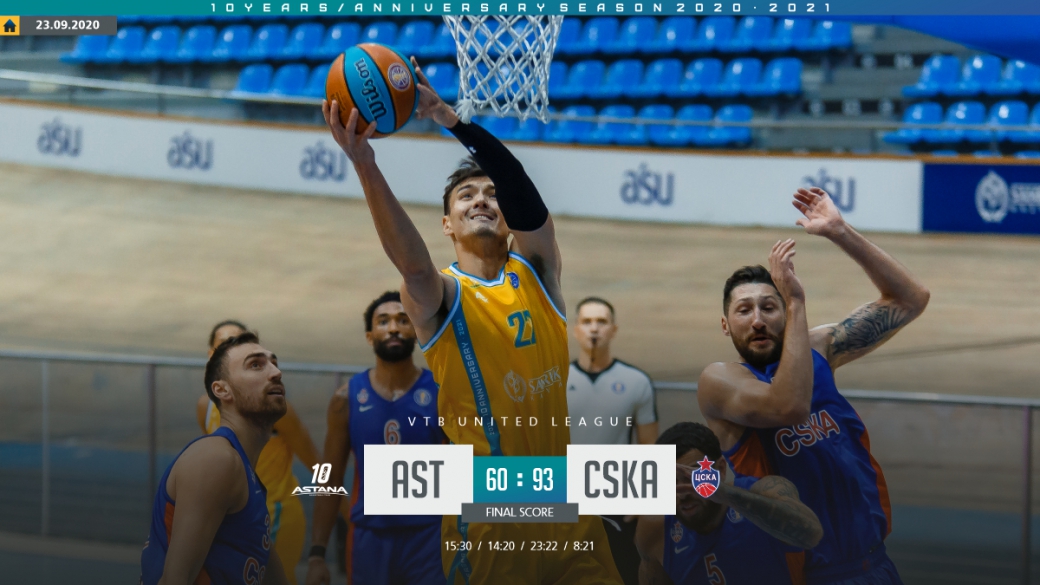 The beginning of the jubilee season for the basketball club «Astana» in the VTB United League turned out to be difficult — in the home game with Moscow CSKA our team failed to impose a fight on their eminent rivals.

At this moment, CSKA has 14 players in the VTB United League, and of course, two of them did not qualify for this game. They were German Johannes Vogtmann and Italian Daniel Hackett. But even without them, the CSKA roster was fully packed with strong players. As for our team, Vadim Shcherbak did not get into the roster for the game. Also, Emil Rajkovic decided to save Adonis Thomas, who was slightly injured during the practice a couple of days ago. Thus, there were only three imports in our team for this game, and the Kazakh players had more chances to prove themselves.

Our guests won the ball at the start of the game and opened the scoring in the first attack. Meanwhile, our team did not manage to shoot the rivals' ring for quite a long time. After more than two minutes from the start and losing already 6 points, Jeremiah Hill scored the first points not only in this match but throughout the VTB United League season for “Astana”. CSKA had won two tournaments in the preseason — the Neva and Gomel Cups and the Kazakhstani team was able to play only one friendly match, and in such a way the rival team had had much more practice before this match. And it proved to be fruitful, the red-blue played their game perfectly, but “Astana” did not give up either. By the middle of the first quarter, «Astana», thanks to a pair of accurate three-pointers performed by the newcomer of the team, Michael Thompson, were losing only 4 points. However, the team foul limit had already been exhausted and the next violation of the rules would already be punished by free throws. Then CSKA raised their pace and their advantage very quickly exceeded 10 points. As a result, the first ten minutes were completely unsuccessful for “Astana” — 15:30. The second quarter also developed in favour of our guests, who confidently moved forward. Four minutes later, the difference reached an impressive 20 points. No matter how hard our guys tried, they failed to close the gap, and CSKA firmly seized on their advantage of around 20 points. As a result, the first half of the match ended with the score — 29:50, which gave our opponents a huge advantage in the second half of the match.

After a long break, Emil Rajkovic's wards coped with their emotions and noticeably improved. The pace of the game increased and both teams played open basketball. “Astana” reduced the gap by a third from 21 to 14 points in less than three minutes, but then Mike James took over the game and was simply unstoppable. His shots reached the goal from any distance and from any game development, and thanks to Mike's efforts, CSKA's advantage very quickly returned to the comfortable advantage of 20+ points. Until the end of the quarter, only Kazakh players Askar Maidekin, Ruslan Aitkali and Robert Pan scored points for «Astana». Thanks to their efforts, the backlog of our team was again reduced to 20 points. “Astana” won the third quarter with an advantage of one point, but the total gap was already too large — 52:72. The final quarter did not start as well as the third one, and our team could not score points for more than four minutes. Five minutes before the end of the match CSKA won 25 points and, in fact, the fate of the match had already been pronounced. The whole fourth quarter for “Astana” became extremely unfortunate — our players scored only 8 points and as a result, lost quite a lot — 60:93.

Most productive:
«Astana» head coach — Emil Rajkovic:
- Congratulations to CSKA, at the moment we are at absolutely different levels with this team. We didn't have much time to prepare, only two weeks of practice. In addition, we lost Adonis Thomas and two other players who did not take part in the match today. Martins Meyers arrived only yesterday, so you might have noticed that he is not in his best shape. On the positive side, I would like to note that our Kazakhstani basketball players had enough playing time, and some of them made good use of it. For example, Ruslan Aitkali, who usually does not get much time on the court, showed good results today. But most importantly, after 190 days, we are finally playing basketball again.

CSKA head coach — Dimitris Itoudis:
- Congratulations to the team on the victory. We knew about Astana's problems with the foreign players who joined the team late. I have great respect for this opponent and wish him the best of luck. We had our own goals for work in defence — we did not fulfil them, especially in the third quarter, which we lost with a score of 22:23. This suggests that we have something to work on. We played well in attack, but I am not satisfied with our play in defence. We conceded 60 points, but we had obvious failures in defence. We were better today, but we have a lot of work ahead of us.

Consequences: CSKA has started the season confidently, and for “Astana”, although they lost their first match, ii is just the beginning.

Next match: On October 3, the capital team will play their first away match in the new VTB United League season, which will be held in Kazan against the local UNICS.