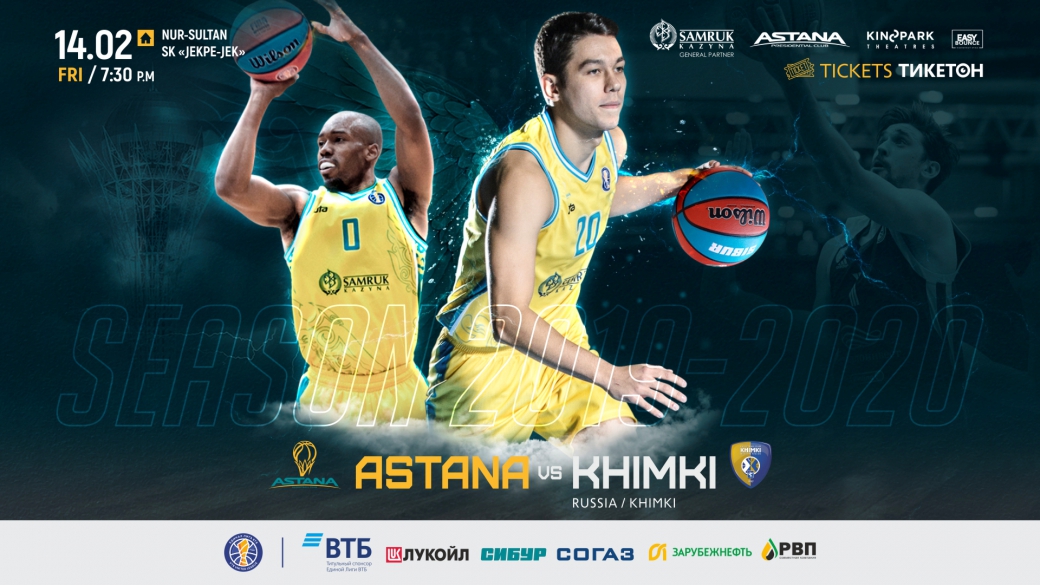 On Friday, February 14, «Astana» Presidential Basketball Club will hold a home match as part of the second round of the VTB United League regular season against the leaders of the standings «Khimki», Moscow Region.

«Khimki» - is a Russian professional men's basketball club from the Moscow Region, founded in 1997. In addition to participating in the VTB United League, they play in the Euroleague.

In the first round match, which was held almost at the start of the season on October 20 in Moscow region, “Astana” played the most ineffective match of the season, gaining only 56 points, and our opponent won a pretty confident victory with a score of 73:56. After that game, «Khimki» has held 12 games in the VTB League. After that game, “Khimki” beat  UNICS cold, and after that, they won “Parma” and “Tsmoki-Minsk” with great difficulty. Then, on the road, they left no chance for “Nizhny Novgorod” and snatched the victory from “Zenit”, and defeated “Kalev” at home. The next game, which also took place at home against the Lokomotiv-Kuban team, brought «Khimki» the first and so far only defeat of the season. Then at home, the Moscow Region team defeated their main competitor, CSKA, and won «Yenisei» in a difficult game. The next game was against «Tsmoki-Minsk» had ended in the defeat of the latter team, UNICS also could not resist, and in the last game, which took place on February 10 in Khimki, in a very bitter struggle, for the second time in a season, «Nizhniy Novgorod» lost to the team from Khimki. In addition to this, “Khimki” has a busy tournament schedule in the Euroleague.

Tournament position: “Khimki” has been spending one of the best seasons in VTB United League, thoroughly positioning themselves on the first line. The Moscow Region team has stumbled only once this season, although they were close to losing victories not only in one but in several matches at once. They won with an advantage of fewer than 5 points in five games this season. By the way, at home, the team plays worse than away, because all these dangerous five games, as well as the only defeat, occurred on their home court. By the way, the closest pursuers of “Khimki”, CSKA and “Lokomotiv-Kuban” lose 3 points to the Moscow Region team, that is, they are three wins behind. “Astana” after losing to CSKA has left the playoff zone, taking 9th place. The victory over “Khimki” will return them to the playoff zone, and the defeat will throw the Kazakhstan team back to 11th place.

Changes in the roster: of two Russian players, experienced Evgeniy Valiev and young Timofey Yakushin were repelled, both players signed with «Parma». The young forward Ivan Evstigneev, who played in five matches, was announced to the team roster to help the main team from the farm team. And literally not long ago there was news that Thomas Earl Robinson, a powerful American forward, returned to Khimki. Thomas has a pretty impressive NBA career: from 2009 to 2017, he played for teams like «Sacramento Kings», «Houston Rockets», «Portland Trail Blazers», «Philadelphia Seventy Sixers», «Brooklyn Nets» and «Los Angeles Lakers».  In the 2017/2018 season, he played for Khimki, and then went to China, and then he returned to the Moscow Region after a season and a half.

Leaders of the opponents: a guard Alexey Shved is the clear leader of the Moscow Region team, as well as the leader of the entire United League in such parameters as Points, Assists and Efficiency. On average, Alexey scores 22.7 points, 9.3 assists with an efficiency of 24.8 per game. The second and third most efficient player in the team is American center Devin Booker and Latvian forward Janis Timma, who constantly is playing in the starting five. Two powerful American forwards Jeremy Evans and Anthony Gill brought a lot of useful actions to the team, but the last time both American players played only on January 19, and in an interview about the arrival of Thomas Earl Robinson, Rimas Kurtinaitis said that both American forwards were not available for the team. But who the team can count on is Swedish forward Jonas Zherebko, Serbian guard Stephen Jovovich and another Latvian guard Dairis Bertans. Among the Russian players, it is worth noting the forwards Sergey Monya and Sergey Karasev, as well as Egor Vyaltsev and Vyacheslav Zaitsev, who often play in the starting five and spend on the court for an average of more than fifteen minutes.

The match will take place on Friday — February 14 in Nur Sultan in the arena of the Sports Complex, beginning at 19:30 Nur-Sultan time. Online broadcast of the match will be available on our website in the Match Center section, as well as live on QazSport TV channel. Tickets for the match are already on sale at Ticketon.kz.