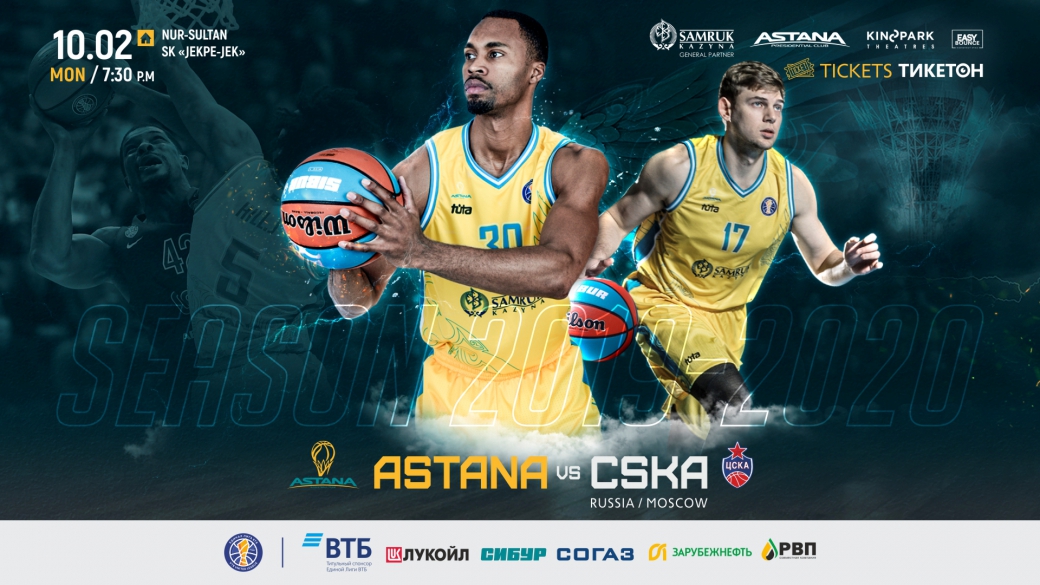 On Monday, February 10, «Astana» Presidential Basketball Club will test the new arena of «Zhekpe-Zhek»Sports Complex in the home game of the second round of the VTB United League regular season against «CSKA» Moscow.

«CSKA» - is a Russian professional men's basketball club from the city of Moscow, founded in 1923. This season, in addition to participating in VTB United League, they play in the Euroleague. The first match of the season against «CSKA» held in Moscow on December 15, 2019. Then our guys lost 13 points to the hosts but were able to impose a stubborn struggle on the current champions, earning more than 90 points — 104:91. After that game, the army team played five matches in the VTB United League, with all five games away. At first, they “didn’t leave a stone unturned” in Tallinn in a match with the local “Kalev”, and in the next game in Minsk they defeated «Tsmoki-Minsk» with great difficulty, wresting a victory by a margin of only 3 points. Closest to home, the “red-blue” suffered the biggest defeat of the season, losing to “Khimki” 16 points. Then in St. Petersburg, the team of Dimitris Itoudis took an act of confident revenge from “Zenit”, and won a difficult game in Nizhny Novgorod. 5 matches in almost two months are not such a busy schedule, but let's not forget that there is still the Euroleague, in which «CSKA» has held 10 more games, and the eleventh will be held four days before the game with «Astana» in Nur Sultan. The Moscow team will arrive in the capital of Kazakhstan after Greece.

Tournament position: “CSKA” is not having their best season, of course, if you call a confident second place during the season unsuccessful. And yet, since the beginning of the season, they have already suffered 4 defeats, and this is the maximum number of failures that the army team had in the past few seasons in the VTB United League. But those seasons are already in history, and the current one is in full swing, so there is a possibility that until the end of the game they can worsen their performance in terms of defeat number. Moreover, «CSKA» loses a lot to the leaders — “Khimki”. In the standings, it will be very difficult for «CSKA» to catch up with them in the regular season. “Astana”, in turn, was on the fifth line only a week ago, but thanks to the not-so-expressive game in Minsk, the “yellow-turquoise” are now on the seventh line.

Changes in the roster: American forward William Klaibern, who played only three games at the start of the season as part of the “army” team and did not participate in the game with “Astana”, officially terminated the contract with the Moscow team only on January 17 this year. But the team has three new names from the last game. Two young Russian forwards, Daniil Kochergin and Alexander Ershov are both from CSKA-2, but if Daniil has already played one game, then Alexander has been seen neither on the court nor in the application. The most interesting newcomer to the team is Cuban forward Howard Saint-Ros. The Cuban began his career in Italian and German teams, then played for the Czech «Nymburk», with them he appeared in the VTB United League. He moved to the Moscow team from the Greek club “AEK”. During his career, he twice became the champion of the Czech Republic, as well as the winner of the EuroCup and the FIBA Intercontinental Cup. Howard has so far played only one match for «CSKA» in the VTB League, but has played five games for the Moscow team in the Euroleague and was one of the main makers of the victory over «Khimki».

Leaders of rivals: CSKA's undisputed leader is a guard Mike James, who has the titles of the team’s most efficient and most productive player. Costa Kufos gets not into all rosters but still is the leader in rebounds. In addition, the main team includes Darran Hilliard, Nikita Kurbanov, Johannes Voitmann, who caused the most problems to “Astana” in the previous match, Kyle Hines, Daniel Hackett, Andrey Vorontsevich, Joel Bolomboy, and Janis Strielniks, as well as rookie Howard Saint Ros. Thus, the bench for the army team is very impressive, and there are a lot of players who can make the game. But according to the rules of the VTB League, at least 6 players with a Russian passport should enter the court for «CSKA», as for any other team. Therefore, we will not see any of the foreign players in «CSKA» in the upcoming match, and among the Russian players we will most likely see Ivan Ukhov and Semyon Antonov, who patted our team’s nerves in Moscow, and Mikhail Kulagin or Andrey Lopatin can also enter the court, and maybe some young players. Only one thing is clear that Dimitris Itoudis has someone to choose from.

The match will take place on Monday — February 10 in Nur-Sultan in the arena of the Sports Complex «Zhekpe-Zhek», beginning at 19:30 Nur-Sultan time. Online broadcast of the match will be available on our website in the Match Center section, as well as life on QazSport TV channel. Tickets for the match are already available at Ticketon.kz. Also, the sale of tickets for the next home match of «Astana» against «Khimki», which will take place on February 14, at the venue of the Zhekpe-Zhek Sports Complex, has started.