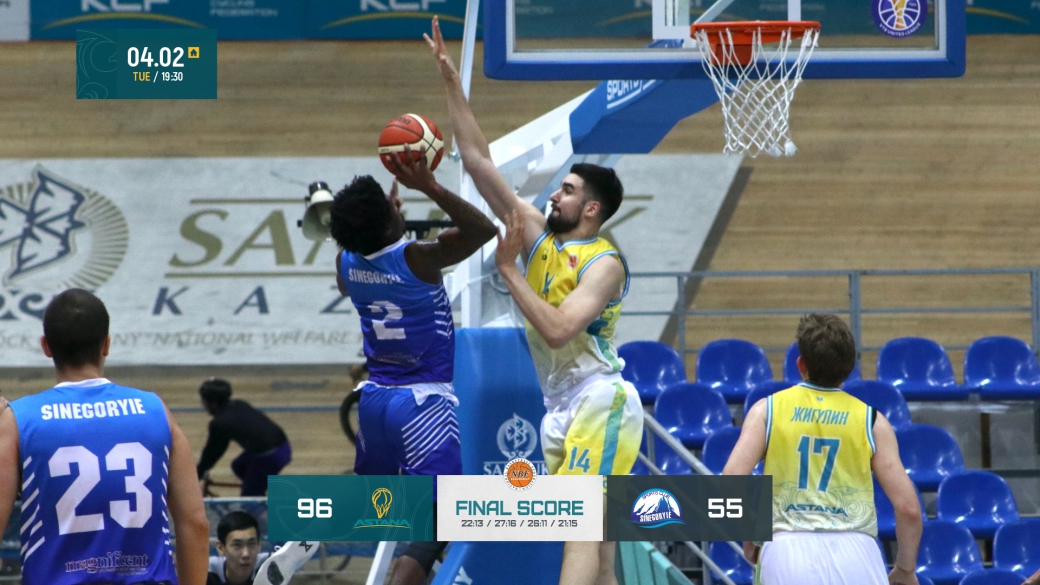 The Presidential Basketball Club “Astana” is one step away from absolute leadership in the National League regular season after defeating «Sinegorye» in the first of two matches of the final series.

In today's match, along with Kazakhstan players, Stephen Holt and Dusan Ristic were listed in the roster for the game. Unlike the previous two matches of the National League against «Kaspiy», in which the foreign players never appeared on the court, in this game both Dushan and Stephen were in the starting five. In addition to them, Robert Pan, Rustam Murzagaliev and Maxim Marchuk appeared on the court at the start of the match.

After a toss, the ball went to our opponents, but they did not fulfill their first attack, but in our first attack, Robert Pan opened the score in the match. The beginning of the game was led by our guys, who were building up their advantage every minute. Exactly 4 minutes had passed when Dusan Ristic brought the gap to 10 points. Our rivals managed to reduce the gap, but most of the time the difference until the end of the first quarter was around 10 points. The second quarter had passed according to a similar scenario, like the second part of the first quarter when the teams played on equal terms. Even when Andrey Litvinenko brought his team’s lead to 14 points, «Sinegorye» continued to resist, and by the middle of the quarter, the difference had again reduced to 9 points. In the remaining five minutes of the first half of the match, our team again began to «tighten the screws» and rushed to increase the advantage. The pace of the game of the capital's basketball players had been growing very quickly and in the last minute before a long break, Stephen Holt had realized two free throws, setting the final score in the first half — 29:49. The 20-point advantage in the first half was the first “bell” on the victory of «Astana» in the whole match, especially since the team of Emil Rajkovic continued to lead the game according to their scenario in the third quarter. Despite the fact that our rivals made a spurt in the third quarter, our guys quickly neutralized all the zeal of their rivals quickly set them back to their previous advantage. At the end of the third ten-minute, “yellow-turquoise” completely dominated, not giving rivals a single chance. Stephen Holt and Vadim Shcherbak brought the gap of the capital's team by the end of the third quarter to 35 points. In less than two minutes of the final quarter, when again Vadim Shcherbak with his next three-pointer made the position of “Astana”' already inaccessible. A few minutes later, Alexander Zhigulin carried out several successful attacks, and «Astana» already had 48 point-advantage. Such a difference did not promise anything well for «Sinegorye», especially since there was very little time left to play. The guests finally found the strength for their last breakthrough, but in the end, “Astana” won a crushing victory with a score of 55:96 (13:22, 16:27, 11:26, 15:21).

Most productive:
Consequences: for our team, as well as for our rivals, there is only one match left, the positions of the teams in the standings remain unchanged, and the capital team is in one victory away from a win-win regular season.

Next match: tomorrow, February 5, the final game between «Astana» and «Sinegorye» will be held as part of the National League regular season. The match starts at 19:30 Nur-Sultan time.


Detailed information about the tournament, standings, the schedule and match results are published in the Tournaments section.

We kindly remind you that Ticketon.kz has started the sale of tickets for the next home matches of the capital team in the VTB United League; on February 10 against «CSKA» Moscow and February 14 against «Khimki».