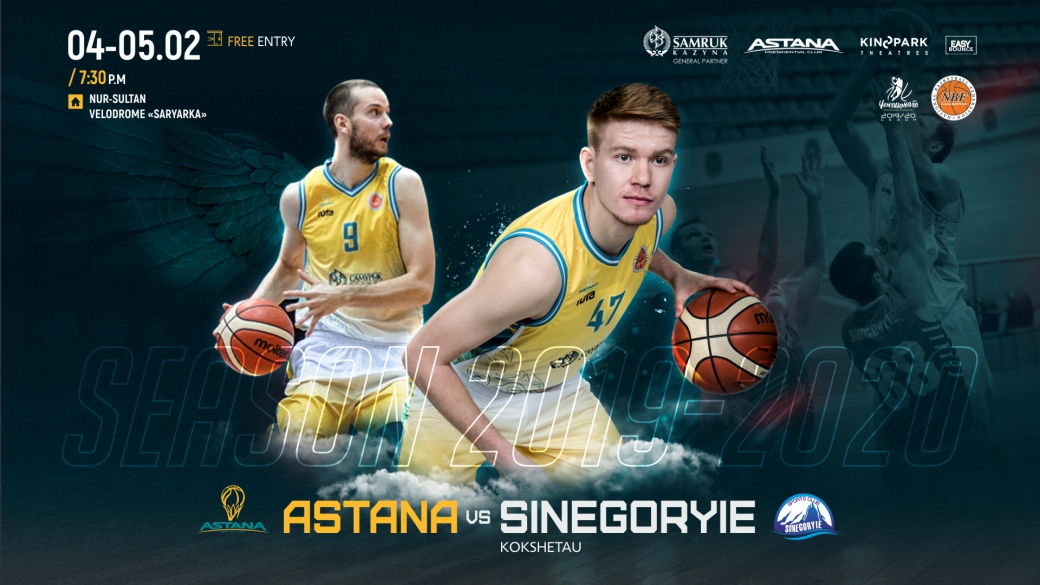 In the final series of the National League, “Astana“ will play at home against “Synegorye”

The Presidential Basketball “Astana” will hold a home series of matches with the Kokshetau “Sinegorye” at the end of the regular season of the National League, the games will be held in the capital on February 4 and 5.

“Sinegorye” - is a Kazakhstani professional basketball club from the city of Kokshetau, founded in 2017. The upcoming series will be the final in the regular season not only for “Astana” and “Sinegorye”, but in generally for this season. The first official games between the capital and Kokshetau teams took place on October 24 and 25, in the capital. Then, “Astana” won two confident victories: on October 24 with a score of 81:55, and the second game ended with a score of 94:53. That series was the first for the Kokshetau team in the season and after that they played two episodes with the rest of the rivals, winning half of their matches — 8 out of 16. “Sinegorye” have never been able to beat “Barsy of Atyrau”, twice won “Tobol” in one game at home and away, and also won three times in “Aktobe” and “Kaspiy”, losing one match away. Formally, the Sinegorye team should be the host of the series, but due to the workload of the capital team, the Kokshetau team agreed to transfer the games to Nur Sultan.

Tournament position: both teams have already secured their final places in the regular season standings and the upcoming series cannot affect their position. “Astana” confidently takes the first place, and “Sinegorye” is in fourth position.

Changes in the roster: this season, the roster of the Kokshetau team has changed quite noticeably. The Ukrainian center Stanislav Zavadsky left the team, as well as two Kazakhstanis joined the team “Aktobe”: a guard Azim Yagodkin and forward Alexander Papshiv. The team was strengthened by Kazakhstani guard Konstantin Neff, who started this season at Aktobe, and most recently the American forward Karim Bryuton joined the team.

Leaders of the rivals: the most effective player in the team is the departed Stanislav Zavadsky, and now forward Roman Lagutin took on this role, gaining an average of 17.4 points per game and making 3.6 assists. Forward Roman Marchuk, the brother of our Maxim Marchuk, in each game earns more than 10 points. Under the ring, the most experienced Uzbek center Dmitry Sviridov, who has long been playing for Kazakhstan teams, demonstrates a very confident game. The main point guard for the Kokshetau team is Vadim Korzhov, who makes an average of almost 4 assists per game. It is also worth noting the experienced forwards Vasily Petrishenets and Stanislav Rovovoy, who very often come out at the start. As for the American Karim Bruton, he spent only one match for the team and he scored 16 points and 7 had rebounds.

Matches will take place on Tuesday and Wednesday on February 4 and 5 in Nur Sultan in the Saryarka cycle track arena. Beginning at 19:30 Nur-Sultan time. Free admission. Online broadcast of matches will be available on the main page of our website.