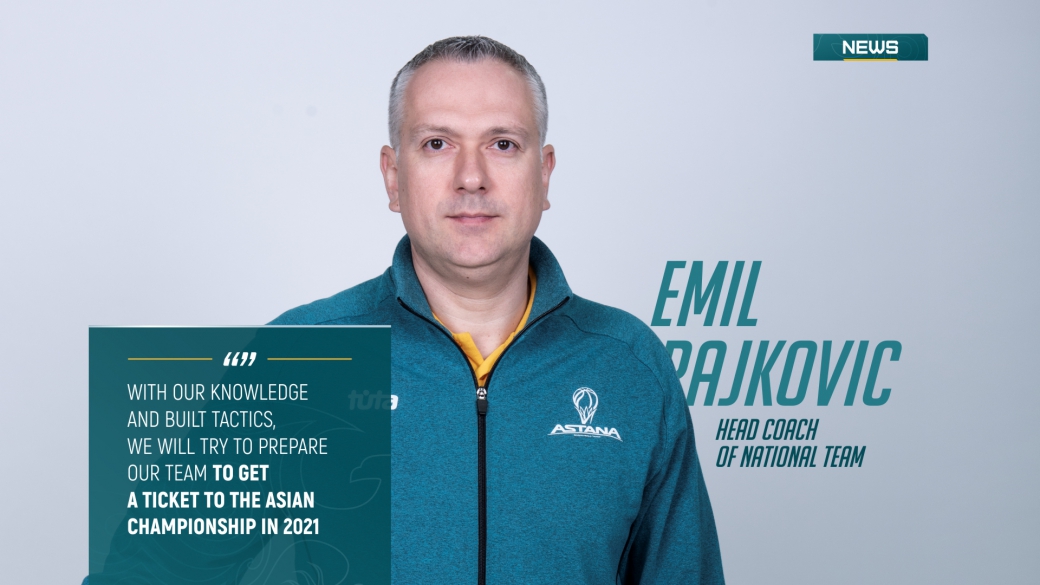 The head coach of the Presidential Basketball Club «Astana» Emil Rajkovic has become a mentor of the men's National Basketball Team of Kazakhstan on the eve of qualification for the Asian Cup in 2021.

Immediately after signing up the contract, Emil Rajkovic answered the most relevant questions regarding the Steppe Wolves and the upcoming qualification for the Asian Cup in 2021.

- You know firsthand about the National team of Kazakhstan and you probably watched the participation of your players in the National team as part of the qualification for the 2019 World Cup. How could you rate their performance?
- Of course, I followed the performance of the National team of Kazakhstan at the qualification games for the World Cup 2019 and watched every game. I think that our guys did a good job, they played with great motivation and made every effort. It is worth noting that the Kazakhstan team in the second round had a very difficult group and strong rivals, but nonetheless, the results were very good. It is worth noting the result demonstrated in the first game against the Philippines. Unfortunately, the team could not win the second match, which took place on the home court, this was the main reason that Kazakhstan was unable to take part in the World Championship. I hope that we will achieve even greater results and each player will contribute to the success of the team.

- Now you have to juggle the coaching process of the team with the preparation for the qualifying matches for the Asian Cup in 2021. Do you expect having some difficulties in this, or vice versa, it will only be beneficial?
- The fact that the players of the Presidential basketball club make the basis of the National team is a great advantage since we will have more time to develop the best game combinations and effectively prepare for the Asian Cup in 2021.

- We cannot but ask a question about Anthony Clemons — should we expect it in the roster of the National Team of Kazakhstan?
- Of course, we will include Anthony Clemons in the rotation of the team.

- Last season, you brought Astana to a new level in the VTB United League and the Championship of Kazakhstan. How are you going to apply your secret of success in working with the National team?
- There is no secret to success, only hard and hard work stands behind every victory. Basketball, like other team sports, is a game where there are two opponents, so not everything depends on you. But with our knowledge and built tactics, we will try to prepare our team to win as many qualification games as possible and get a ticket to the Asian Championship in 2021.

On June 8, 2019, in India, in the city of Bangalore, qualification draw for the Asian Basketball Cup among men's teams in 2021 was held, as a result of which the rivals of the Steppe Wolves in the group became known, and at the end of July FIBA published the schedule of matches, which, as well as qualifications for the World Cup, will be played on a traveling system basis and will include 3 games. The first games are scheduled for the end of February 2020, the second game will be played in November 2020, and the third and final game will take place in February 2021. Emil Rajkovic is a former Macedonian professional basketball player. He started his coaching career in 2006 as a coach of the Macedonian club «KK Feni Industries» (2006 — 2013), he also headed the coaching staffs of «KK Rabotnicki» from Macedonia (2013/2014) and the Polish «Silesk-Wroclaw» (2014 — 2016). He was recognized as the “Coach of the Year” four times in the Macedonian Championship between 2008 and 2014. In the Polish league, he was recognized as the “Best Coach” for the last two years in 2017 and 2018. With the Macedonian team, «KK Feni Industries» he won the Balkan League in 2011. In Europe, Emil Rajkovic is known as an unyielding and natural winner. He is from that plethora of new-generation coaches from the former Republic of Yugoslavia, who is being predicted a great future.
In addition to high coaching qualifications, he is an excellent motivator and is well versed in psychology.

Under the leadership of Emil Rajkovic, “Astana” held the best VTB United League season in its history — 2018/2019. In the United League championship, the Kazakhstan team won a record 15 victories (57.7% is also the best result), which allowed it to take 6th place in the season. Also, for the first time in the history of the League, “Astana” had a positive balance of scored and missed points on average in the regular season (+2.7). In March, the capital basketball players broke their record for the number of victories in the “regular season” — 13, and after success in the game with “Yenisey”, they demonstrated the best result in the percentage of matches won — 60. The team from the capital of Kazakhstan taught everyone to fight to the last seconds. Quite often, “Astana” started a game not that bright, but thanks to the changes that the coaching staff brought in during the game, the team managed to recoup and gain strong-willed victories. As for the success of the wards of Emil Rajkovic in Kazakhstan tournaments, under his leadership, Astana won 7th Kazakhstan Cup, and the 7th victory in the Kazakhstan Championship was the main achievement, thanks to which «Astana» became the most decorated men's team in the country.

Emil Rajkovic’s contribution to the team’s progress did not go unnoticed and he was recognized as the best coach of the VTB United League championship season 2018/2019. The awarding ceremony took place in Nur-Sultan before the third match of the quarter-finals of the playoff series between «Astana» and «Khimki».