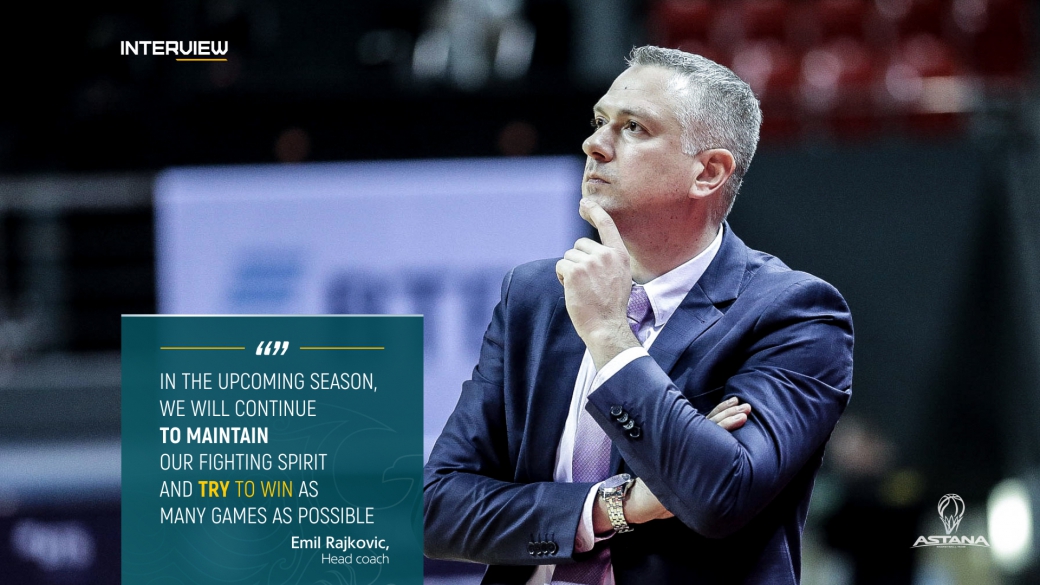 Emil Rajkovic: «In the upcoming season, we will continue to maintain our fighting spirit»

The head coach of the Presidential Basketball Club “Astana”, Emil Rajkovic, in an exclusive interview spoke about how he had spent his vacation, how the preseason training of the capital team has been going, who he is rooting for at the FIBA World Cup and shared his plans for the upcoming season.


- How did you spend the offseason?
- I spent the offseason with my family on vacation, spent a little bit of time in Greece and then we had a trip to Barcelona and during the vacation we also attended some basketball seminars to update the knowledge and to brainstorm with the other coaches and talk about new things in basketball.

- How is the preparation for the new season going?
- Preparing for the season is already in the stage of friendly games. To date, we have played three friendly games: the first match was against the CBet team from Prenai (the first division of Lithuania), in which we managed to win, in the second match against Khimki (Moscow region), the opponent turned out to be stronger and won the game, and yesterday’s game we had a draw with Lithuanian club Neptunas. All three games demonstrated the potential of our team, but there is still work to be done and the second part of the training camp will be key. - In the offseason, the composition of the legionnaires has been completely updated. Can you briefly say a few words about each of the newcomers?
- In the offseason the legionnaires, most of them left because of the offers which they had and because of the great season with Astana, they had great offers and opportunities to move on in their careers.  We could not financially compete with these clubs and we could not keep any of our players although we wanted to keep some of them, but it was almost impossible, because their price on the market went up two, three times bigger so we had to scout new players.

- Are there any other candidates for the team in mind?
- We need to fill the roster spots for foreigners and we need to find reinforcements in order to compete in the VTB league.  This year all the teams have raised their budgets multiple times and they have much stronger teams than last season.  I hope that our management will find a way  to secure the budget in order to fill the roster spots for foreigners with the quality players who can help us to compete with the strong teams of the VTB league. One thing I know for sure is that at the beginning of the season one special player should join us, but everyone will find out about this a bit later.

- What tasks does the team face for the upcoming season and what forecasts can you personally give?
- After seenig the rosters of VTB teams it is very ungrateful to say that we would like to put some higher goals, because the other teams have really strong rosters and they have much bigger budgets than us, but we will continue and try to keep this fighting spirit that we have and go game by game and try to win as many games as possible in order to reach the playoffs, which will be tough this season.  I hope that along the way of chasing the victories we will complete the bigger task — improvement of some of our Kazakh players, so they can really play higher levels and they can really help the National Team and Astana in the future.

- Last season was the most successful for Astana in the history of the club. Have you already developed a recipe for success with Valery Alekseevich?
The last season was the most successful in the club's history and we can not say the recipe because every year the conditions are different and we need to adjust and adapt, but our cooperation with Valeriy Alexeevich is constant and all the times we are trying to find ways to make our roster better and to make the team stronger, so we can compete against other VTB teams. - In the upcoming season, qualification for the Asian Cup in 2021 will begin. Should we expect that “Astana” will again become the backbone of the National team?
- Like every year the majority of the players are from Astana, because they are the best players, but when we are talking about National Team, this is a selection of players who are the best at that moment and chosen to play games against other countries.  Every good Kazakh player is a potential National Team player and we should treat this like that and try to find the best players for the qualifications.

- Follow the World Cup in China now? If so, who are you rooting for?
- I am not rooting for anybody, we just hoping that it will be a high quality basketball and until now this was the case and now this is the quarter finals stage, there were some surprises, Greece fell out, Serbia also, Lithuania, we saw some hard moments like mistakes of referees, coaches, players, but we also saw some beautiful plays and actions, I hope until the end World Cup the best basketball will be played in semi-finals and finals.

- Your wishes to the fans for the upcoming season.
- I would like to see a lot of young people on the matches of Astana, who are interested to see this beautiful sport, which is in the whole world is the most popular game after soccer, I hope that this game will also become popular in Kazakhstan among the young people especially, because this is a beautiful sport, and this is a sport for very intelligent people, I know that in Kazakhstan there are many young and intelligent people and I hope this season we will have even more fans supporting our club.

The new basketball season for “Astana”  will begin October 6 with the away game in VTB United League with UNICS (Kazan), and the first home game will be held in the capital on October 12, in which our team will host “Lokomotiv Kuban” from Krasnodar.