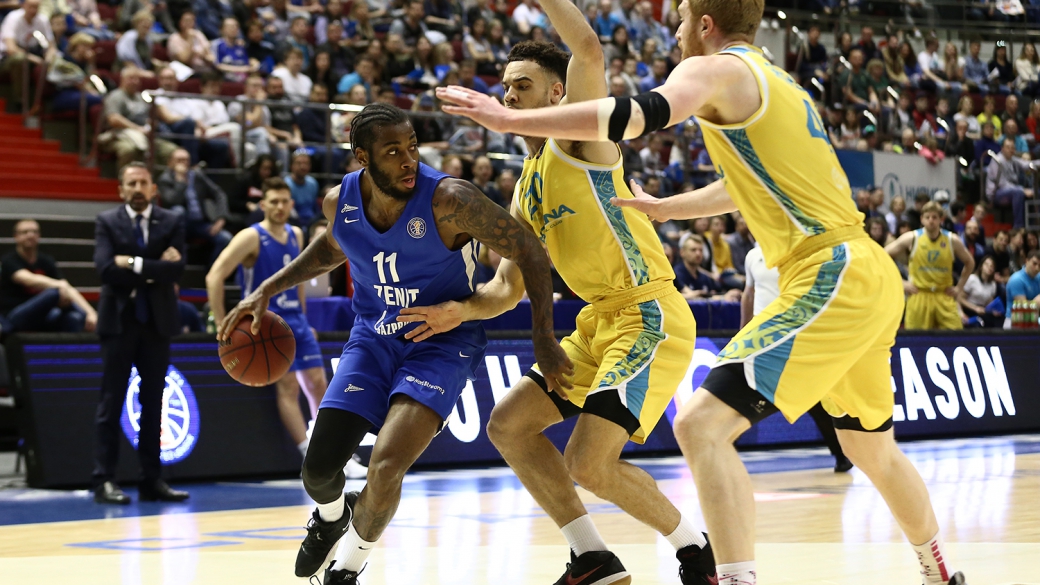 In St. Petersburg, «Zenit» and «Astana» found out who was going get the 5th place in the regular season. The hosts had started powerfully: in a minute they scored 9 unanswered points in a row, provoking rivals for 2 losses and forcing the head coach of «Astana» to take a time out. Cody Miller-McIntyre initiated this breakthrough: the guard scored 7 points in this segment. A minute break did not save the guests from Kazakhstan: by the middle of the quarter, «Zenit» had already won 15 points, having successfully realized 4 long-distance shots from 6. Jalen Reynolds, who had brightly returned to the court after a 2-match suspension, contributed to this success. However, gradually, “Astana” managed to reduce the effectiveness of rivals. First of all, it became possible thanks to regained ball control: Emil Raikovic's players pulled together after a bad start and made only 1 loss before the big break, depriving «Zenit» of easy points. Michael Jenkins successfully entered the game from the bench, scored 14 points in the first half and became the main hero of Astana's comeback: thanks to his accurate free throws on the last minute of the 2nd quarter «Astana» left for a big break as leaders- 50:49.

In the second half, the teams staged an exchange with long shots. First, “Astana” broke away with “+6”, then “Zenit” with the help of 5 three-pointers in the 3rd quarter, took the lead, and in the final 10 minutes pulled away with a 9-point advantage. However, the guests, having scored from the arc three times in a row, reduced the opponents the gap to a minimum- 82:83. Sergey Karasev, who had recovered from an injury, could have become one of the key players of the ending — after his alley-oop to Jalen Reynolds and after middle-range shot «Zenit» led again by 5 points. Nevertheless, in the final 4 minutes of the 4th quarter, the hosts could not score any points, while «Astana» evened the score and led the game in overtime.

“Astana” scored only 4 points in 2 and a half minutes of overtime, while «Zenit», with the efforts of Philip Skrubb and Yevgeniy Valiev, broke away with “+8”. The guests made several mistakes from the free throw line and failed to win any points back.

Thanks to this victory, «Zenit» caught up in a number of victories with «Astana», but due to a better margin of scored and missed points in personal games, it rose to the 5th place, moving rivals from the capital of Kazakhstan to 6th place.

Figure: 34 — so many three-pointers the players of “Astana” made, updating the club record of the season. Interestingly, Kazakhstanis attacked 31 times from two-points distance — 3 less than from a long-range distance.

«Zenit» head coach — Joan Plaza:
I can say that the end of such a regular season, which began with “-35” in Krasnodar, in which there were so many problems, it was impossible to expect any other outcome. It was clear that we were going to have a difficult match. I am glad that the players were focused on achieving victory, they lost only two penalties. This means that no one was relaxing. We played as a team and achieved victory.

The head coach of «Astana» — Emil Raykovic:
I am proud of my guys, they gave it all. In the end, they could have better used of offensive rebounds, scored throws, but I will not criticize the guys. This is a historic season for «Astana». Now in the playoffs, we have nothing to lose, we can only gain. If we lose, no one will judge us, but we have a chance for something more.

At this point, the VTB United League regular championship for «Astana» has come to an end, following which the capital club took the fifth place in the standings and will take part in the fight for the main trophy of the tournament — the Belov Cup.

«Astana» will hold the next matches at home — on April 30 and May 1, the Kosthetau basketball club «Sinegorye» will be in the capital as part of the final series of the National League regular championship.