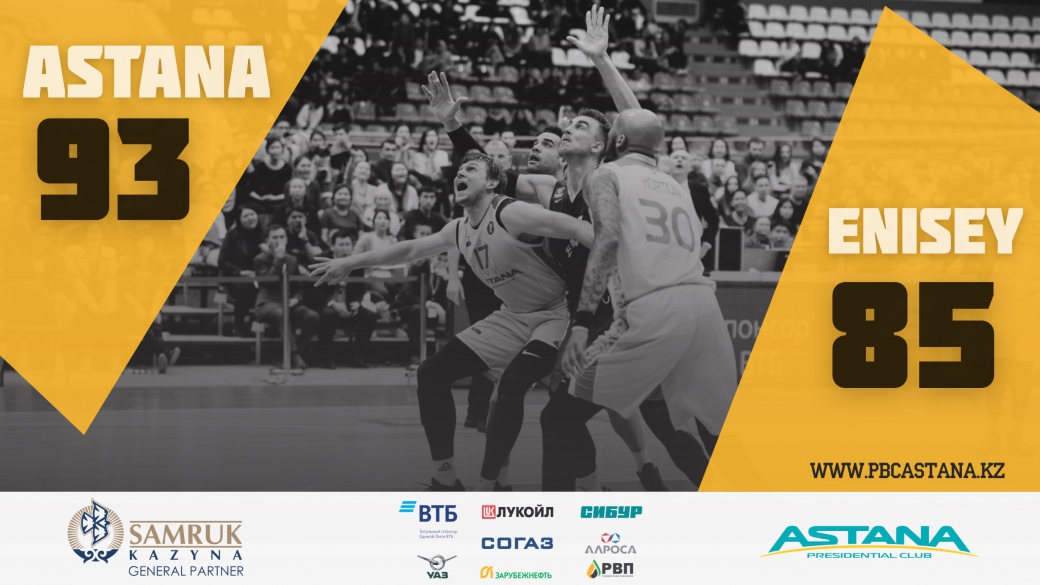 Before this match, «Yenisey» lost all chances of getting into the playoffs. But these circumstances did not deprive the Siberians of their motivation. It was the guests who took the initiative in the beginning of the game. The pace in their game was set by Russian basketball players. Zakharov, Popov, and Komissarov scored 21 points in the first period, which ensured the Krasnoyarsk team a comfortable lead — 28:17. For most of the second quarter, the guests reserved the two-digit gap in the score. Siberians confidently attacked from a distance (three-pointers — 7 out of 10) and were better on the rebound (17 — 16). Moreover, Zakharov was on “fire” (15 points), and Popov dominated on rival's glass (12 points). The well-measured course of the match was «broken» at the end of the quarter. Jenkins, Clemmons, and Horton organized an eight-point spurt; as a result «Astana», by a long break, reduced the gap to 7 points — 43:50.

The third quarter went under the usual scenario. First, Siberians, through the efforts of the energized Meyers (11 points), increased the lead. Their advantage reached 15 points (62:47). But then the hosts had another trick up their sleeve (9 points in a row) and reduced the gap to just two shots — 62:66. In the final quarter, the initiative has completely passed into the hands of Astana players. And several basketball players of the host team were on fire. They played well in the early attack, played aggressively in defense, and scored even super-complex throws, too. In the middle of the period, the yellow-blue team for the first time took the lead — 83: 82. The key to their success was a six-shot spurt in the end, which was organized by Horton and O'Brien. The advantage of «Astana» for one and a half minutes before the final buzzer reached 9 points — 93:84. This allowed the hosts to bring the match to a confident victory.

This success allowed Astana to remain in 5th place. «Yenisey» by its defeat weakened its position in the struggle for the ninth line of the tournament table.

Hero: Stephen Holt usually remains in the shadow of other yellow-blue import players. But the guard held this game at a very good level. He scored 16 points, made 8 rebounds, 5 assists and demonstrated the best efficiency in the game (24).

«Astana» head coach — Emil Rajkovic:
- This was a very difficult game, we until the end kept believing in a positive outcome. We knew that it would not be easy for us since «Yenisey» won the last three matches. It was important for us before the last game in St. Petersburg to go with a positive mood. I am very pleased and very happy that we have won. Thank you very much to our fans and the spectators that they came and supported our team. I hope that in the coming playoff games, it is with the same mood and also with a large number of spectators that we will play and feel this support, which is very important to us and which our players strongly feel.

«Enisey» head coach — Oleg Okulov:
- Congratulations to the team of «Astana» with a victory today and entering the playoffs.

The team will also hold the next matches at home — on April 23 and 24, Emil Rajkovic’s players will host «Tobol» from Kostanay on their court as part of the National League regular championship.

The next match of VTB United League, which «Astana» will hold in St. Petersburg against «Zenit», will be the final for the capital team within the regular season.