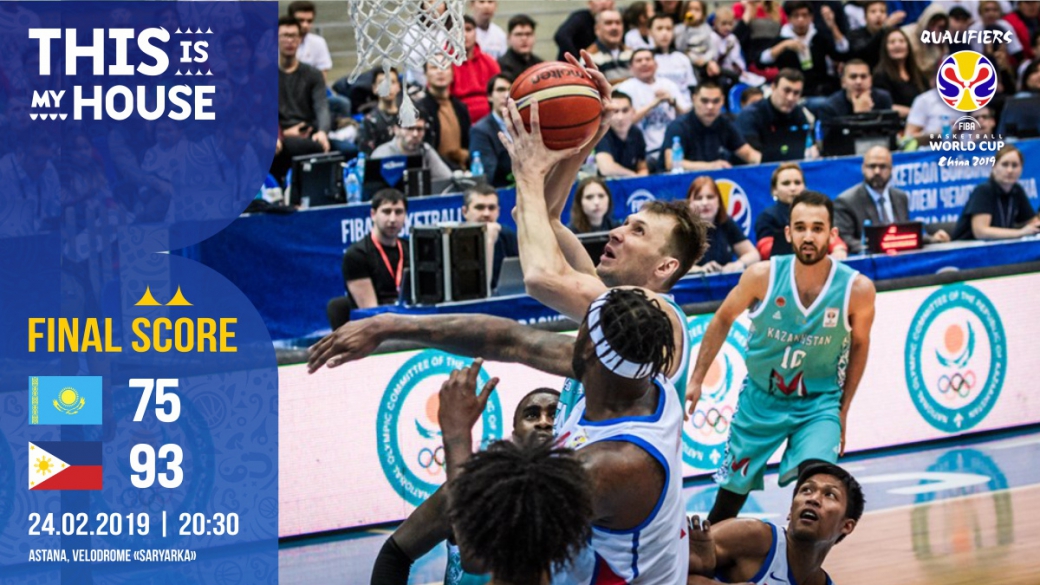 Kazakhstan's National Team failed to secure success in their personal rivalry against the Philippines National Team in the final match of the Asian qualification for the 2019 World Basketball Championship.

Kazakhstan team held the final match of the Asian qualification for the World Cup against the Philippine team. In the second round, the rival of the “steppe wolves” is the only team that was defeated by the Kazakhstani, and this happened in Manila on November 30, 2018. The Filipinos were determined to take revenge, but earlier they managed to strengthen their position occupying the fourth place of Group F after defeating Qatar. In fact, the match Kazakhstan — Philippines did not influence the rankings of the teams, and at any outcome of the game, the teams would have maintained their positions in the group. If you take a look at the roster of our rivals for the last game, then it is obvious that it has changed significantly from that memorable game in the Philippines. Only four players from that roster arrived in Astana. Perhaps Andrew Blatch was the one, who deserved to be in a limelight — a 32-year-old native of the city of Syracuse, USA. At some point of his career, Blatch played in the NBA for such clubs as Washington Wizards and Brooklyn Nets, and now continues his professional career in China and, after receiving the citizenship of Philippines, defends the colors of this country. As for the roster of our team, it has not changed since the last match with the Australians. The Filipinos won a jump ball but didn't take advantage of it and missed the ball. In the very first attack, Rustam Murzagaliyev opened a score with a precise three-pointer. A minute later, Alexander Zhigulin widened the gap in favor of our team to 5 points. As for the Filipinos, the first points were scored by Andrew Blatch, after which in the third minute our opponents evened the score and then took the lead. “Steppe wolves” made every effort to regain the initiative, but they could not stop Andrew Blatch, who was very active and confident in scoring points. The Philippine team pulled away by 8 points, but our guys started to reduce the gap, and at the end of the first period, the score was almost equal — 21:22. In the second period, an equal game continued on the court. Kazakhs followed and not once evened the score, but the Filipinos were constantly able to break through again. Finally, at the start of the seventh minute, Anthony Clemmons stole the ball and assisted to our captain Rustam Yergali, who was alone at the opponent's shield, and the latter led the Kazakhstan team ahead, for the first time in the second period. Unfortunately, the wards of Renatas Krlionokas could not take the lead, and in the last two minutes of the first half of the match let the guests the opportunity to complete it in their favor — 40:45. The third period started according to the Philippine scenario, and after a minute and a half of the game, our guests' advantage for the first time in the match exceeded 10 points. Anthony Clemmons opened the scoring at the end of the second minute for our team. Most of the remaining time in the third quarter the difference between the teams remained around 10 points. The Filipinos once increased the gap to 15 points, but our guys twice reduced the difference to -6. However, in the end, the third quarter ended with a score of 60:71. In the final quarter, our guests were very determined to keep their advantage and increased it to 15 points. The hosts tried to change the course of the game, but the rivals did not allow them to make a breakthrough. The difference in the score continued to remain around 15 points in the last five minutes of the match. The Filipinos were satisfied with the result, and choose to slow down the game, which inexorably approached to the end. On the penultimate minute, our opponents still managed to increase their advantage to 20 points, but in the end, they won with a score of 75:93. If you take a deeper view of the reasons for the defeat and compare statistical indicators, then there is no clear advantage of Filipinos for any of them. For rebounds and interceptions, there is a small margin in favor of Filipinos — 35/39 (rebounds) and 6/9 (interceptions). Kazakhstanis made 4 more losses — 16/12 and lost 1/2 block shots. At the same time, “Steppe Wolves” had 8 more assists than their rivals — 23/15 and less often broke the rules — 20/24. Also in this match, the Kazakhstan team again lost in performance to their rivals — 42% accuracy of points from the game and 65.4% of free throws for our team vs. 47% for points from the game and 71.4% for free throws for the Filipinos. Our rivals today won the hosts by a margin in 2- and 3-point shots, and free throws. And given that they are more effective in using their skills, this difference in the score seems to be logical. The main cause of today's defeat was the most experienced Andrew Blatch, whom our players could not stop and allowed to make an impressive double-double (41 points and 13 rebounds).

The detailed information about the match and the opposing team, statistics, news, photo, and video reports are published on our website in the Match Center.

The Asian qualification was completed and all 8 teams to represent Asia and Oceania at the upcoming World Championships were determined. Along with the hosts of the World Championship China, they are Australia, New Zealand, Japan, Iran, South Korea, the Philippines, and Jordan. Under the new FIBA rules introduced before the 2019 Championship, all teams in each continental zone are divided into two divisions. In Divisions A, in which the main qualification for the World Championships is taking place, 16 best teams play, with the exception of Europe, where there are 32 teams. Teams that did not go into the second rounds of Division A will need to be pre-qualified with the best teams of Division B in order to return to the top 16 (top 32 for Europe). The Kazakhstan national team, which took place in the second round, now directly falls into Division A of the Asian qualification for the next World Championship, which will be held in 2023 in Japan, Indonesia, and the Philippines. 2019 World Basketball Championship — the 18th Men's National Basketball Championship under FIBA. According to the voting results of the FIBA commission members, it was determined that the tournament will be held in China.

«Mediker Sport» company is the general sponsor of the National Federation and the Kazakhstan National Basketball Team. The partners are the marketing agency «GB Media Consult» and the cinema chain «Kinopark Theatres», with the support of the National Olympic Committee, the Ministry of Culture and Sports and the Akimat of Astana.