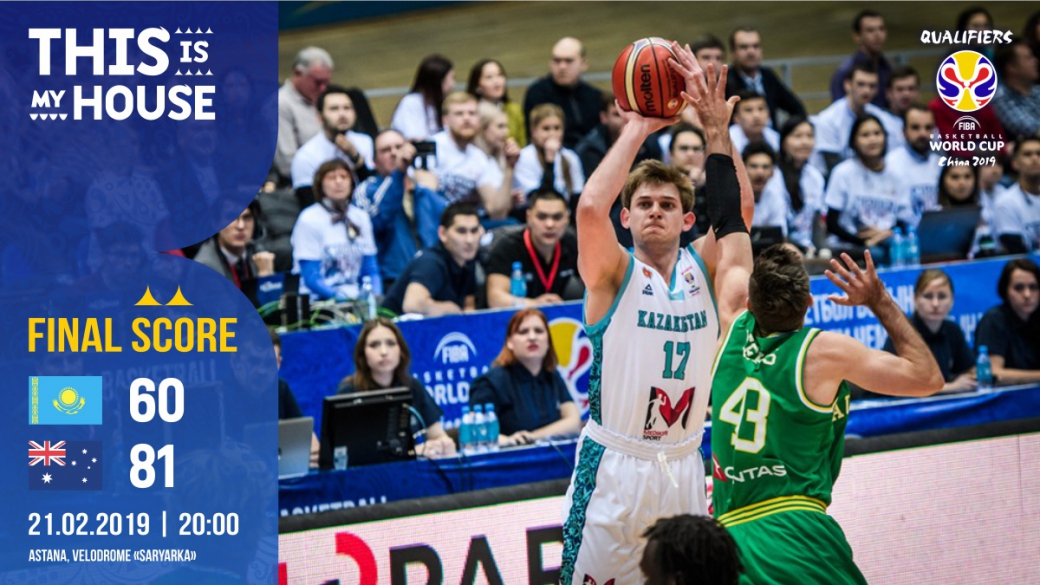 Kazakhstan's National Team failed on its floor to take revenge on the Australian «boomers» in the FIBA-Asia World Cup Qualifiers 2019.

Before the final FIBA-Asia window, the Steppe Wolves retained a chance for a ticket to the 2019 World Cup, but in order to do so, Steppe Wolves needed to go two from two in the remaining matches. But let’s not forget who we faced in the first home game: current Asia Cup Champions and the basketball nation — Australia. In the FIBA ranking, Australians occupy a rather high 10th place in the world and 1st place in the Asia region. For comparison, Kazakhstan is at the 70th position in the world and the 13th in Asia. Given this rating, the Kazakhstan team was far from the favorites in this match, especially since the Australians are the undisputed leaders in our group. A couple of days before the game, the final roster of the “boomers” became known, and for our team, it was a big plus that not the main Australian basketball stars arrived in Astana. However, despite this, the Australians continued to be favorites in the match. If we talk about changes in the roster of our team, then the main change in our team was the arrival of Anthony Clemmons. One of the main players of the National Team, Maxim Marchuk, suffered a knee injury a couple of days before the game and was not cleared for this match. In addition, it is worth to mention that the Australians, literally, are a head taller — half of the Australian players taller than two meters, and two of them standing at 2.10 and 2.11 meters. Our team cannot boast of such height, and the advantage in the game under the basket and on rebounds was originally on the side of our rivals. Dmitriy Gavrilov won the jump ball, but in the very first offense our team could not open the score, and the Australians were in no hurry to do so. It has been more than one and a half minutes before the score was opened in the match, and the small forward of our team Nikolay Bazhin, who scored the first three-pointer in the game. This spurred the “boomers” and they scored their first points in the very next attack. At first, the Kazakhstanis kept ahead, but the Australians did not lag behind and at some point equalized. Then our team played the role of catching up and constantly tied the score, but in the last minutes of the first period the Australians achieved their goal and made a small lead, eventually won the first quarter with a score of 20:27. The second quarter was extremely ineffective for both teams. Representatives of the green continent in the first attack earned two points, but the Kazakhstanis were able to score first points after only a minute with the efforts of Anthony Clemmons. Then our players, as they say, finally “lost sight”; the ball simply did not fall into the basket. Australians also could not boast of performance and were able to increase their advantage by only 5 points, but in the end, it reached 12 points. In the sixth minute of the quarter, Anthony Clemmons finally broke the scoreless period of Kazakhstan. In the remaining time of the quarter, both teams slowly continued to make scoring runs.  As a result, the national team of Kazakhstan lost the first half of the game with an 11 points deficit — 28:39. The deficit of 11 points was not critical.  Unfortunately, in the third quarter, the ball never went in for “wolves.» In the first half of the third quarter, our team scored only 5 points, while the Australians increased their advantage to 15 points with an excellent scoring run. The second half of the quarter also did not take shape for the wards of Renatas Kurylonokas. Wolves could not capitalize on the open shots, and the “boomers”, taking advantage of our unproductive performance, gradually increased their handicap. As a result, the third quarter ended with the 20 points deficit for Kazakh side — 36:56, and the hope of victory in this match moved farther and farther away. The start of the final period was also not at all pleasing to the fans, besides the quarter opener 2 points shot from Anthony Clemmons, the Kazakh team could not score points for two and a half minutes. While our players were dealing with the “spell” superimposed on the opponent's basket the deficit became scary and almost reached the figure of -30. Finally, the Australian team's basket was “printed out” and the Kazakhstan players began to score some much-needed points, but the opponent was already far away, and the final buzzer was no longer than seven minutes of playing time. Kazakhstan tried to reduce the gap and reduced it by about a third, but they failed to break through the figure of -20. As a result, the match ended in victory for the Australians — 60:81. Anthony Clemmons made his debut in this match and scored more than half the points of the whole team, but, unfortunately, his bright game did not help our team to achieve the desired victory today. If you understand the reasons for the defeat and compare the teams' stats, the difference in the rebounding is immediately evident — 29 for Kazakhstan and 48 for Australia, but as mentioned above, the Australian players will be higher than ours and this indicator should have been higher, but still, he is very different. Although Australians are taller, they have not made a single blocks, while Kazakhstan have successfully blocked their opponents four times. “Boomers” distributed 5 more assists than Wolves — 11/16. As for steals, our players made more of them — 8/5 and the Kazakh team looks much better in turnovers — 7/19. Also, “steppe wolves” less often foul — 13 fouls in Kazakhstan and 19 in Australia. If we conditionally add up all these indicators, then the best position of Kazakhstan’s players in terms of losses, block shots and steals covers the lack of rebounds and assists. Thus, we can say that the teams played fairly close, but the defeat of 20 points just does not appear on the empty space and there should be a good reason for that. The head coach of our team, realizing that the Australians are taller than our players and the game under the basket will not give special results, made a bet on attacks from the arc, something that the Kazakhstanis had successfully used in previous matches. But today, this bet did not pay off. At first, the Kazakhstan squad played well with an outside shooting and scored points, but then the rivals basket seemed to be“ concreted ”, and the scope of our shooters got off, especially in the second and third quarters. It is in the low shooting percentage that the cause of today's defeat lies. Two-point shots were implemented with an accuracy of 35%, while for Australians — 60%; the 3pts shooting — 27% compared with 42% of rivals; Yes, and free throws today summed up — 61% from Kazakhstan and 85% from Australia. Thus, summing up, we can say that the poor shooting was the main reason of our defeat.

Detailed information about the match and the opposing team, statistics, news, photo and video reports are published on our website in the Match Center.

We remind you that on Sunday, February 24, the “steppe wolves” will hold their final match as part of qualifying for the World Cup and will host the Philippines National Team, the first game with which took place on November 30, 2018 in Manila and ended with a strong-willed victory of our guys — 88:92. The match starts at 20:30 Astana time. Online ticket sales on Ticketon.kz.

The match will be held in Astana, in the arena of the Republican cycle track «Saryarka». The cost of tickets to the stands at court  is 3,000 tenge (the price of the ticket includes an exclusive T-shirt with the symbols of the Asian Qualification for the World Cup). 2019 World Basketball Championship — the 18th Men's National Basketball Championship under FIBA. According to the voting results of the FIBA commission members, it was determined that the tournament will be held in China.