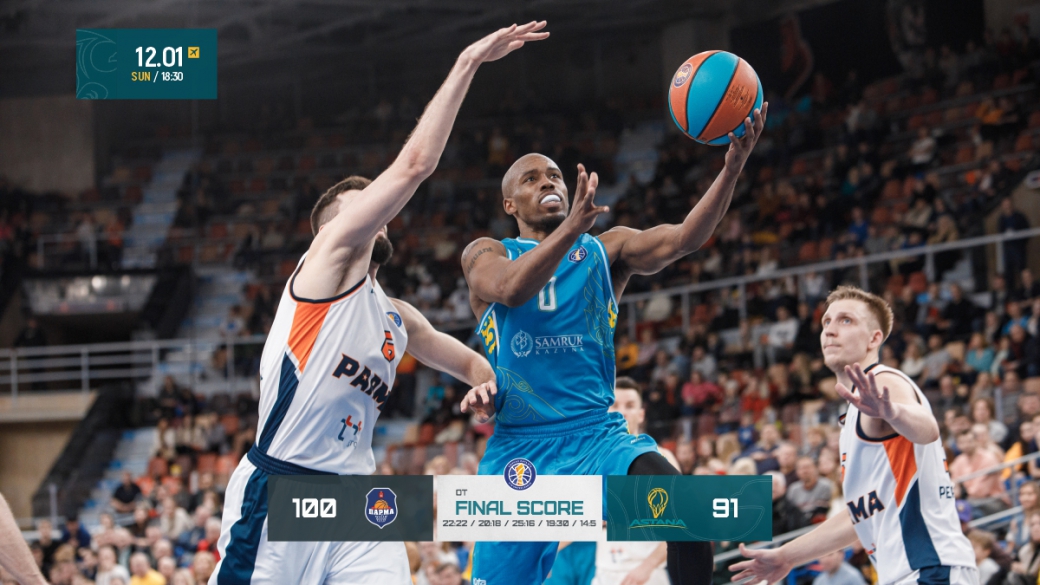 Away game with «Parma» ended for «Astana» with defeat in overtime

In the away match of VTB United League against «Parma», «Astana» Presidential Basketball Club lost in overtime and suffered the first away defeat in the history from Perm.

All the fans of the capital’s team really hoped for statistics of the last meetings of “Astana” with Perm, according to which our guys have never lost in Perm. However, the hosts, of course, were very determined to make adjustments to this statistics and take the first victory at home over «Astana». Thus, the game promised to be tough and challenging. At the start of the match, the ideas of Emil Rajkovic were to be realized by the starting five: Dushan Ristic, Alexander Zhigulin, James Florence, Malcolm Hill and Vadim Shcherbak.

Dusan Ristic was not able to beat his counterpart on a toss, after which, although not in the first attack, the hosts opened the score in the match. «Astana» carried out their first attacks from behind the arc, but this did not bring the desired result when out of six three-point attempts by Astana players, only one, performed by Malcolm Hill, reached its goal. Meanwhile, by the middle of the quarter “PARMA” was in the lead by 6 points, but the rebound in the attack by Malcolm Hill and two points from Alexander Zhigulin laid the foundation for our team wagering. Three minutes before the end of the first quarter there was a three-pointer from Zhigulin again, and for the first time the score in the match equalized. The hosts resisted for a long time and did not allow our team to come forward, but in the last minute Jeremiah Hill was accurate from behind the arc and “Astana” pulled away for the first time in the match. But after the buzzer announcing the end of the period, four deuces flaunted on the scoreboard. In the second quarter, a stubborn struggle for the lead took place on the court. Our guys pulled ahead, but the Permians constantly evened the score and did not allow “Astana” to make a sufficient gap. Half of the quarter went in such a manner, but then a couple of unrequited successful attacks followed by our guys gave +7 in favor of Astana. The timeout from Maskvitis could not turn the game around, but at least “PARMA” prevented our team from pulling away. A minute before the end, the Perm coaching staff resorted to a second tactical pause, which this time bore fruit. The hosts began to actively recoup, and before the big break, they completely stepped forward — 42:40. The game in the third quarter of the players of Emil Rajkovic did not go well from the very beginning. Two points from Malcolm Hill were the only ones in 4 minutes on the account of “Astana”. While the advantage of “Parma” during this time had increased from two points to a double-digit number. Toward the middle of the third quarter, the players of “Astana” were finally able to remove the “spell” from the ring of rivals and began to gain points. However, our rivals were unstoppable and continued to increase their advantage, which two minutes before the end of the third quarter almost reached 20 points. The situation for “Astana” was very difficult, but the capital basketball players were not going to give up and spent very efficiently the remaining couple of minutes reducing the backlog from -18 to -11 points. The third quarter was extremely unfortunate for «Astana», but in the end our guys gained a good pace and the gap before the start of the fourth period did not look so critical. The final quarter began fervently for the players of the Kazakhstan team, who made a couple of interesting steals, but failed in performance and the score was opened by Perm. “Astana” scratched out the much-needed points, but “PARMA” went well in attacks and grasped its advantage thoroughly. And yet, slowly but surely, the gap between the teams narrowed. The hosts fought back as best they could, but “Astana” systematically went to restore balance in the game and a little more than a minute before the end of the match the score was evened out, thanks to the efforts of Jeremiah Hill. After a couple of attacks, “Astana” had a great chance to win this match and a full-fledged attack in the last seconds, but in the end everyone was waiting for overtime with the score 86:86.

Both teams were exhausted by a tense struggle and an additional five minutes of playing time were extremely difficult. Each point was as valuable as gold, and any mistake could lead to irreparable consequences. Half of the overtime of the team went neck to neck and it was extremely difficult to predict the outcome of the game. But then “PARMA” was able to earn a small handicap and, with the frenzied support of the stands, was on a roll. Players of “Astana” were noticeably tired physically, nevertheless, our team had chances, but the ball bluntly did not fly into the ring at the most necessary moments. As a result, “PARMA” defeated the Kazakhstan team in Perm for the first time in history — 100: 91 (22:22, 20:18, 25:16, 19:30, 14: 5).

The head coach of «Parma» — Kazys Maksvytis:
- It was a very changeable game. I am glad that the team showed character, especially in the third quarter and in overtime. It is a pity that the opponent managed to reduce the backlog, which ultimately led to overtime. Perhaps one of the reasons is that as early as the middle of the week, Lorenzo Williams and Maxim Grigoriev had minor injuries, and Robert Johnson did not participate in practices. But I am pleased with the spirit of my players and the fact that they managed to turn the tide of the game and take the victory in overtime.

Head coach of “Astana” — Emil Rajkovic:
- Congratulations to «Parma» on the victory. It was a very interesting game. We allowed the opponent to make two large breaks on points, but after we managed to return to the game after a lag of 18 points. In the last seconds of the match, we had the possession and the opportunity to make the winning throw, which we planned, but, unfortunately, failed to realize it. In overtime, we lost 9 points. I think this is too much. Consequences: After the defeat in Perm, “Astana” again left the playoff zone, going down to the 9th line of the tournament table, and “PARMA” has stayed on the same 12th position.

Next match: on January 17 and 18, the capital's basketball players will be visiting Kostanay, where they will hold a National League series against Tobol. In the framework of the VTB united league, players of Emil Rajkovic will play at home on January 26 against the Polish «Zielona Gora».