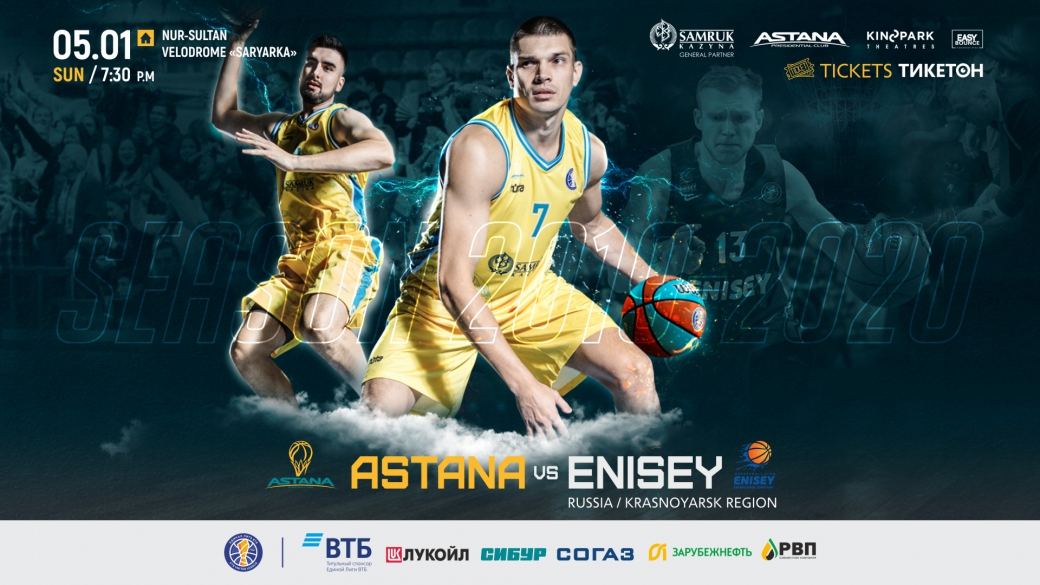 The first match in the new year «Astana» Presidential Basketball Club will hold on January 5, the capital basketball players will host «Enisey» Krasnoyarsk on their court in the framework of the VTB United League.

«Enisey» - is a Russian professional men's basketball club from the city of Krasnoyarsk, founded in 1981. This season, in addition to participating in the VTB United League, they play in the FIBA Europe Cup.

This season, the team was led by Croatian specialist Drazen Anzulovic. In the offseason, Drazhin was replaced by the Russian Oleg Okulov, who in turn headed the coaching staff of the Krasnoyarsk team for 4 consecutive seasons. Anzulovic was born in Yugoslavia and had spent almost his entire career as a player in «Cibona» from Zagreb, with whom he became the champion of Yugoslavia, as well as the winner of the FIBA European Champions Cup. He gained his first coaching experience in 2001 when he headed Zagreb, and in 2003 Drazen returned to «Cibona», but already in the capacity of the head coach and won the Croatian Premier League three times in four seasons. Then he went to the Ural Great team in Russia, but in the same season he headed «Spirou Charleroi» with whom he immediately won the Belgian Professional League, and the next season he again became the champion and also won the Belgian Cup and Super Cup. In the 2009/2010 season, he replaced Ramunus Butautas as the head coach of “Donetsk” and this was the first season, he participated in the VTB United League. In the 2010/2011 season, Anzulovic returned to his homeland and again to the “Cibona”, with which he won the Croatian Cup, and then there was another Croatian team “Cedevita”. After a break in a couple of seasons, Anzulovic headed the Polish “ISS Dombrova-Gournich”. In the 2016/2017 season, he assisted in the coaching of the Croatian National Team, and then moved to China, to «Nanjing Monkey King». Last season, Drazen Anzulovic led the Croatian National Team, with whom he won the Stankovic Cup. 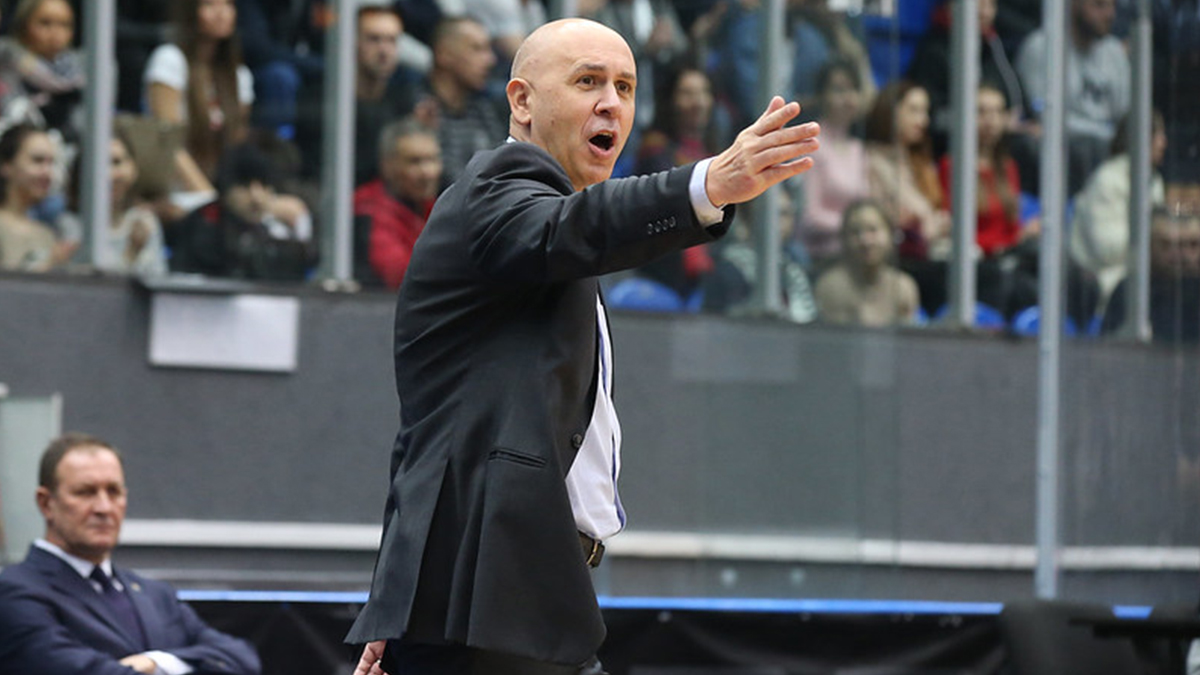 In the offseason, the team replaced all foreign players, including leaders: American guards Di Angelo Harrison and John Roberson, as well as American shooting guard Alex Young and the Latvian center Martins Meyers. The American forward Michael Bruzewitz and the Ukrainian guard Denis Lukashov also left the team. Three Russians did not renew their contracts with «Enisey» in the offseason, a guard Vasiliy Zavoruev, forwards Alexander Lavnikov and Gleb Goldyrev. Five Russian players continued to play for the Krasnodar team. Experienced shooting guard Artem Komissarov, who began his career in «Krasniy Octyabr», who also played for «Zenit» and «Ural». Artem is a silver medalist of the Russian Cup and a bronze medalist of the VTB United League, the Championship of Russia and the Russian Cup for the third season in the Krasnoyarsk team. Guard Denis Zakharov is also the third consecutive season, but in general the fourth season in “Enisey”, also, he played in the teams “Lokomotiv-Kuban”, “Nizhny Novgorod”, “Dynamo Moscow” and “Sparta and K” and is a silver medalist Russian Cup and bronze medalist of the Major League and Super League. Defender Ivan Viktorov plays for the Krasnoyarsk team for the second season, and he has a game in the teams “Nizhny Novgorod” and “Khimki”. Center Ilya Popov began his career at «Spartak», played in «Nizhny Novgorod» and «Spartak-Primorye», and starting last season with «Enisey», he completed it on loan at the Swiss «Lines de Geneva». Ilya is the silver medalist of the Russian Super League, Swiss Championship and twice the Russian Cup. Guard Sergey Mitusov is a young homegrown player of «Enisey» in the team since 2015. It is also worth noting the center Igor Kanygin, who was expelled from the “Enisey” in March last season but returned this season after playing in the “East-65”. He played in the Krasnoyarsk team since 2016, and before that he played in the «Lokomotiv-Kuban» team for three years.

Five American players joined «Enisey» this year. Guard Darius Morris, who played mainly in the USA, having managed to be part of teams such as the Los Angeles «Lakers», Philadelphia «Seventy Sixers», Los Angeles «Clippers», Memphis «Grizzlies», and Brooklyn «Nets», as well as in the teams of the NBA Development League “Los Angeles D-Fenders”, “Rio Grande Valley Wipers” and “Santa Cruz Warriors”. Darius also played in the Chinese “Guangdong Southern Tigers”. Guard Davion Berry, who began his career as an Italian «Torino», and then played for «Maine Red Claws» and «Raptors 905» teams in the NBA Development League, as well as participating in teams in South Korea, Greece, and Germany. Forward Garlon Green began his career in Australia and quickly moved to Japan, and then noted in Germany and Belgium. Garlon began the last season as part of «Khimki» but ended as part of the Israeli «Hapoel». Center Dustin Hog started in Greece, and then moved to Italy, he also had a small outing to China. Guard Chavon Lewis played in Lithuania and Poland, spent last season for Estonian «Kalev», and this season began in «Nizhny Novgorod», but then moved to «Enisey». Experienced Croatian center Tomislav Zubcic is a five-time champion of Croatia, a three-time winner of the Croatian Cup, as well as a silver medalist of the Adriatic League and the championship of Lithuania. He played in the Croatian, Lithuanian, Turkish, German and Spanish teams, as well as in the team from Bosnia and Herzegovina. Also, Tomislav played in the Oklahoma «City Blue» team in the NBA Development League and the VTB United League in «Avtodor» and «Nizhny Novgorod» teams. Also for “Enisey”, this season Serbian guard Nicola Rebic is playing, he is a two-time champion of the Adriatic League, Serbia, and a winner of the Serbia Cup. Mostly Nicola played for Serbian teams, but had spent the last season in Spain and then Montenegro. Alexander Gudumak became a newcomer from Russia, although he can’t be called a proper newbie, as he played in «Enisey» in the 2017/2018 season, besides he was on the roster of «CSKA», «Avtodor», «Krasnye Krylia», «Nizhny Novgorod», «Sakhalin» and “East 65”. Aleksander has two championship titles in the VTB United League and the Russian Championship, as well as a championship in the Super League. Also, in “Enisey” a young shooting guard Ilya Usoltsev, who had previously played in “Zenit” and “Locomotive” is performing this season. Leaders of the rivals: Davion Berry, who played in all matches of «Enisey» this season, spends on the court an average of more than 30 minutes and scores almost 20 points per game. Dustin Hog does not often appear in the starting five, but this does not prevent him from being the leader of the team under the ring with an average rebound of 6.6 per match. Besides, one of the team leaders is Tomislav Zubchic. The Americans Darius Morris and Garlon Green in the last games did not go to the court, but the Russians Denis Zakharov and Artem Komissarov, as well as Serb Nikola Rebic, are constantly used by the coaching staff of the Krasnoyarsk team on the court.

Standings: “Astana” ended the year 2019 with an away victory over the “Zielona Gora” team, but after 10 matches, it takes 11th place in the standings. As for  “Enisey”, in the very first game of the season, they created a sensation by beating «CSKA» at home, though then there was a home defeat from «Khimki», and then two victories in a difficult away match with «Parma» and at home with «Avtodor». This was followed by a defeat on the road from «Zenit» and a difficult away victory over «Tsmoki-Minsk». Then there was a home victory over the «Lokomotiv-Kuban» team and two away defeats with «Kalev» and «Nizhny Novgorod» teams, but in the New Year’s thriller with «Kazan UNICS», the Krasnoyarsk team managed to snatch a victory. Thus, having 6 wins and 4 losses, “Enisey” is on the 4th line of the tournament table.

The history of the games: “Enisey”, as well as “Astana”, came to VTB United League in the 2011/2012 season, but for the first time the teams met on the court in the 2014/2015 season, not in the League though, but in a friendly match. Then the Kazakh team won. In the VTB United League, “Astana” also won, but lost the second game. In the 2015/2016 season, “Enisey” won both matches. Over the past three seasons, each team has won their home matches and was defeated away. In total, “Astana” and “Enisey” played 11 matches among themselves — 10 of which were within the VTB United League, “Enisey” won 6 games, and “Astana” won 4 games.

Interesting Facts:
The match will take place on Sunday, January 5 in Nur-Sultan in the arena of the Republican cycle track «Saryarka», beginning at 19:30, Nur-Sultan time. Online broadcast of the match will be available on our website in the Match Center section, as well as life on QazSport TV channel. Tickets for the match are already on sale at Ticketon.kz.