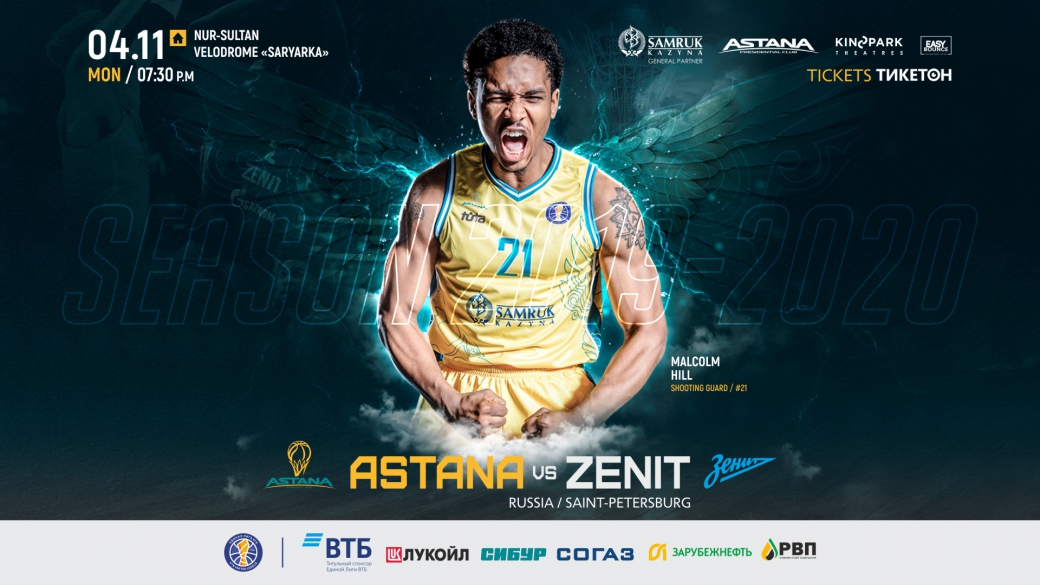 On the first Monday of November, «Astana» will host «Zenit» in the framework of VTB United League

The next rendezvous in the VTB United League at the Presidential Basketball Club “Astana” will be happening with the St. Petersburg “Zenith”, which will be held on November 4 in Nur-Sultan.

«Zenit» - is a Russian professional men's basketball club from the city of St. Petersburg, founded in 2014. In addition to participating in the VTB United League, they play in the Euroleague.

The St. Petersburg team replaced the head coach in the middle of last season, changing the Russian Vasiliy Karasev to a Spanish specialist, Joan Plaza, who during his career was the head coach of «Real Madrid» and «Zalgiris». He twice became the winner of the Eurocup with his teams, and also led them to the Champions of Spain and Lithuania. Joan Plaza headed «Zenit» coaching staff this season.
If you compare the roster of “Zenit” in 2018/2019 and 2019/2020, then one can notice they are very different. In the offseason, only 5 players extended their contracts with a team from St. Petersburg and they all have Russian passports. Of these, three played at the base and often went to the starting five: Anton Pushkov, Vladislav Trushkin, and Evgeniy Voronov, and two young ones: Sergey Balashov and Konstantin Shevchuk. The main loss of St. Petersburg since last season was one of the main American team leaders, Jalen Reynolds. All the imports left the team with him: Americans Cody Miller-MacIntyre, Jerrod Yutoff, and Sean Armand, Israeli Gal Mekel, Serb Marko Simonovic, and Canadian Philip Skrabb. As for the Russians, the contract with the team was not renewed by Sergey Karasev, Andrey Desyatnikov and Evgeniy Valiev.

But a holy place is never empty and the team has a myriad of new players. He joined the team very well and became one of its leaders the most experienced Mexican center Gustavo Aion, who played in the NBA for three seasons, taking part in such teams as the «Hornets», «Magic», «Bucks» and «Hawks», and the last 5 seasons has spent in the team of «Real Madrid». Gustavo is a two-time champion of the Euroleague, winner of the Intercontinental Cup and also he won the championships of Spain and Mexico twice. This season, “Zenit” declared five Americans, but none of them can boast of their experience in the NBA, maybe only in the summer leagues, and played mainly in European championships. Champion of Croatia and Germany, a guard Alex Renfro traveled all over Europe, playing in Italy, Croatia, Germany, Turkey, and Spain, he is also familiar in the VTB United League for playing for the VEF in the 2009/2010 season and «Yenisei» in the 2013/2014 season. Forward Will Thomas began his career in Belgium, where he earned a title the MVP of the season, then his fate threw him to Georgia, Turkey, and Italy, but in recent years he played as part of the Spanish “Valencia”, where he became a winner of the European Cup and MVP Final, as well as the champion of Spain. Guard Tim Abromaitis played in France and Turkey, and with his last team, the Spanish “Tenerife” became the winner of the Intercontinental Cup and the winner of the FIBA Champions League. A center Colton Iverson also came from “Tenerife”, who had previously played in Turkey and Israel. Austin Hollins is the youngest American guard, with experience playing for the teams of France, Finland, and Germany. The European contingent of foreign players this season includes two players: Frenchman Andrew Albisi, silver medalist of Europe in 2011 and bronze medalist of World 2019 and winner of the Intercontinental Cup, two-time champion of Belgium and champion of Poland, Pole Mateusz Ponitka, who came to «Zenit» from «Lokomotiv». 3 experienced Russian players joined the Petersburg squad: European champion and Olympic bronze medalist guard Anton Ponkrashov came from UNICS, another Olympic bronze medalist defender Dmitriy Khvostov and forward Andrei Zubkov from «Loko».

The history of the games: “Astana” and “Zenit” have 10 games and all of them were held within the VTB United League. The metropolitan team outplayed St. Petersburg three times, and the last yellow-turquoise team's victory came at the start of last season, and in the last game, which took place in St. Petersburg, “Zenit” was able to win only in overtime.

Tournament standings: “Zenit” started the season with a major victory over the Polish team “Zielona Gora”, and then was able to beat CSKA, but then the St. Petersburg team lost 3 matches in a row: “Nizhny Novgorod”, “Kalev” and “Lokomotiv”. “Zenit” is on the eighth line of the VTB United League standings, while “Astana” with one victory and two defeats is located one position lower.

The match will take place on Monday, November 4 in Nur-Sultan in the arena of the Republican cycle track «Saryarka», beginning at 19:30 Nur-Sultan time. Online broadcast of the match will be available on our website in the Match Center section, as well as life on QazSport TV channel.

We remind you that Ticketon.kz also opened the sale of tickets for the next home match of Astana in VTB United League against the Belarusian club «Tsmoki-Minsk», which will be held on Saturday, November 9.