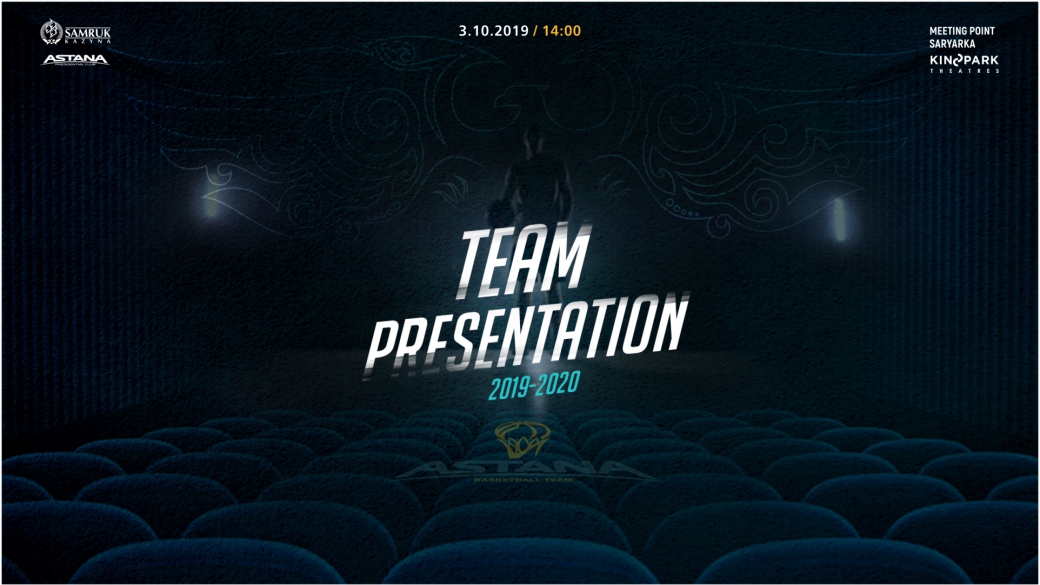 Invitation to the presentation of the Presidential Basketball Club «Astana»

The new roster of the capital’s team, being led by the best coach of VTB United League last season, Emil Rajkovic, was fully staffed and even had the opportunity to get to know each other on the court in friendly matches during their training camp in Lithuania. Everyone already knows the names of the guys who will defend the National League title and the title of Kazakhstan Cup winner in the upcoming season, as well as try to surpass the best result of «Astana» in VTB United League. It is time to personally meet new players and greet the long-timers of the team and those players who have been defending the colors of the Presidential Basketball Club “Astana” for more than a season.

On Thursday, October 3, in Nur Sultan, at Kinopark cinema in the Saryarka Shopping and Entertainment Center, a presentation of the new roster of «Astana» Presidential Basketball Club will take place.

This season, not only by officials and media representatives, but also our fans will attend the presentation. All our guests will be met by girls from the support group, whose composition has also been updated over the summer. Before the start of the presentation, an autograph and a photo session of the players will be held, and during the official part, all the newcomers of this season will be presented with official Astana jerseys.

A new image concept of the club will be presented, and fans who have managed to book seasonal tickets will be expected not only to receive their treasured passes, but also can expect a pleasant surprise.

After the official part, all guests will have a buffet dinner, during which everyone will be able to personally chat and take pictures with the players and the coach, as well as take autographs and wish them good luck before the start of the season.

Those fans who can’t attend the presentation will be able to watch it live on the club’s page on Instagram.

Presentation Program:
Contacts of the press service of PBC «Astana»:

Press attaché — Chingiz Tusupbaev
Phone: +7 775 888 66 65
E-mail: pr-pbcastana@mail.ru We remind you that on Monday, September 30, in Nur Sultan, at the arena of the Republican cycle track “Saryarka”, the pre-season Media Day of the Presidential Basketball Club “Astana” will take place; fans of the capital's team will be able to watch it live on the club’s page on Instagram.

In the meantime, you can find out what the capital “Astana” will expect in the 2019/2020 basketball season, as well as the answers of the team’s head coach Emil Rajkovic to the most important questions before the start of the season in an exclusive interview with the club’s press service.VTB United League Championship started on September 25th. “Astana” will play its first game of the season on October 6 in Kazan  with «UNICS», and the first home match will be held in the capital on October 12, with «Astana» rival «Lokomotiv-Kuban» from Krasnodar. The capital team will hold the first games in Aktau against the “Caspiy” on October 15 and 16 as a part of the National League.

Detailed information on tournaments, tournament tables, schedule and results of matches are published in the Tournaments section.